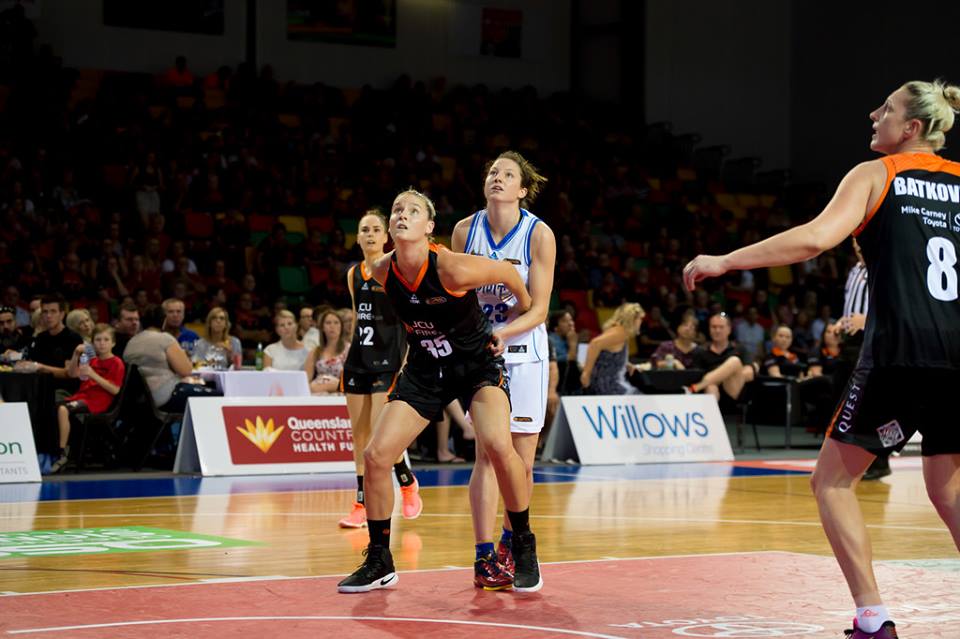 Round 15 Game of the Week

Townsville and Bendigo have fought many great battles but this FridayÕs clash could be one of their most desperate.

With Dandenong and Sydney growing stronger plus Perth looking in better form and with games in hand, suddenly there is a chance either the Fire or Spirit will miss the top four.

This will add desperation to this weekÕs clash, even with one game between the two clubs to come in two rounds time.

Spirit centre Gabe Richards plays her 250th game on Friday and she said this match plus the SpiritÕs clash with Canberra on Saturday night made the weekend a pivotal one in her sideÕs season.

The Capitals sit in sixth place but are only a couple of wins from moving up.

ÒPlaying Townsville then heading to Canberra on the back of two losses is a tough ask but we have trained well this week.

ÒLast weekendÕs loss to Sydney was heart-breaking because it was so close but we still know we have got the team who gel again and get two wins.Ó

The Spirit will likely still be without point guard Kerryn Harrington as she continues to recover from a quad injury with import guard Blake Dietrick moving up to the starting role while teenager Kara Tessari will help out as needed.

Richards will also resume her battle with 301-gamer Suzy Batkovic while two-time Spirit championship winning guard Kelly Wilson will again face her former side as a Fire player.

The season series is 1-1 and the Spirit hold a ten-point advantage but there will be another meeting after this one so the series is wide open.

Batkovic said the two-time champions had battled through adversity this season and were still in the finals hunt.

ÒNow we are down to the pointy end of the season itÕs crucial for us for where we are sitting to get wins,Ó Batkovic said.

ÒObviously getting the season split will be huge for us but itÕs in the back of your mind, we have to try and get this win, especially at home.

ÒWe need to be locked in and get those wins now, we canÕt afford those games where we lose by three or five points because we were sloppy or not great on defence.Ó

This game will also see the Fire celebrate the contribution of Australian servicemen and women with their Hoops for Troops game.

The Lightning will be out to topple the ladder-leaders for the second time in 2017 and this time they host the Rangers in Adelaide.

Dandenong regained some traction with an overtime win over Melbourne last week and they will be fired up to prove their loss to the Lightning was just a once-off.

Laura Hodges returned from injury last round for the Lightning so her presence will help combat the height and skills of Lauren Scherf, Ally Malott and Jacinta Kennedy but the Rangers will be extra attentive to Tayla Roberts after her star turn against them last meeting.

The Flames and Lynx will test out their respective progress in what could be a finals preview.

Leilani Mitchell came up huge for the Flames in Bendigo with 25 points and that adds to the defensive questions for the Lynx who will also have to handle inside threats Asia Taylor and Jennifer Hamson.

Tessa Lavey and Sami Whitcomb are still the heart-beat of the Lynx but centre Ruth Hamblin came up big last start with 21 points against Bendigo while Carley MijovicÕs outside shooting could test the FlamesÕ bigs at the defensive end.

Whoever can lock down defensively for longer should get this one and the winner will get the added bonus of winning the season series.

The Capitals have found two big wins in the last two rounds beating Sydney Uni and Townsville; now they test their form against a Bendigo side who only just beat them in their earlier meeting.

Both sides match up closely with international class bigs like Nayo Raincock-Ekunwe (Bendigo) and Marianna Tolo (Canberra) and plenty of scoring threat but both sides have endured erratic form this season and with finals spots up for grabs, neither can afford to lose this one.

The Spirit can claim the season series if they win as they already hold a 2-0 lead and a +22 advantage with two games to come in the head-to-head battle.

The Boomers have had enough heartbreak to last several seasons and last roundÕs overtime loss to Dandenong topped things off.

But the positive was the Boomers are well and truly capable of taking it to the best in the league and the Lynx will need to recover well from their clash with Sydney Uni and be ready for the BoomersÕ best.

The LynxÕs size advantage will be noticeable but they will also have to handle the speedy, aggressive BoomersÕ and some of the offensive wrinkles which have helped the likes of Maddie Garrick in the new year.

This one is a danger game of the Lynx and could be a much-needed boost for Melbourne ahead of their Australia Day Eve showdown with Dandenong next week.