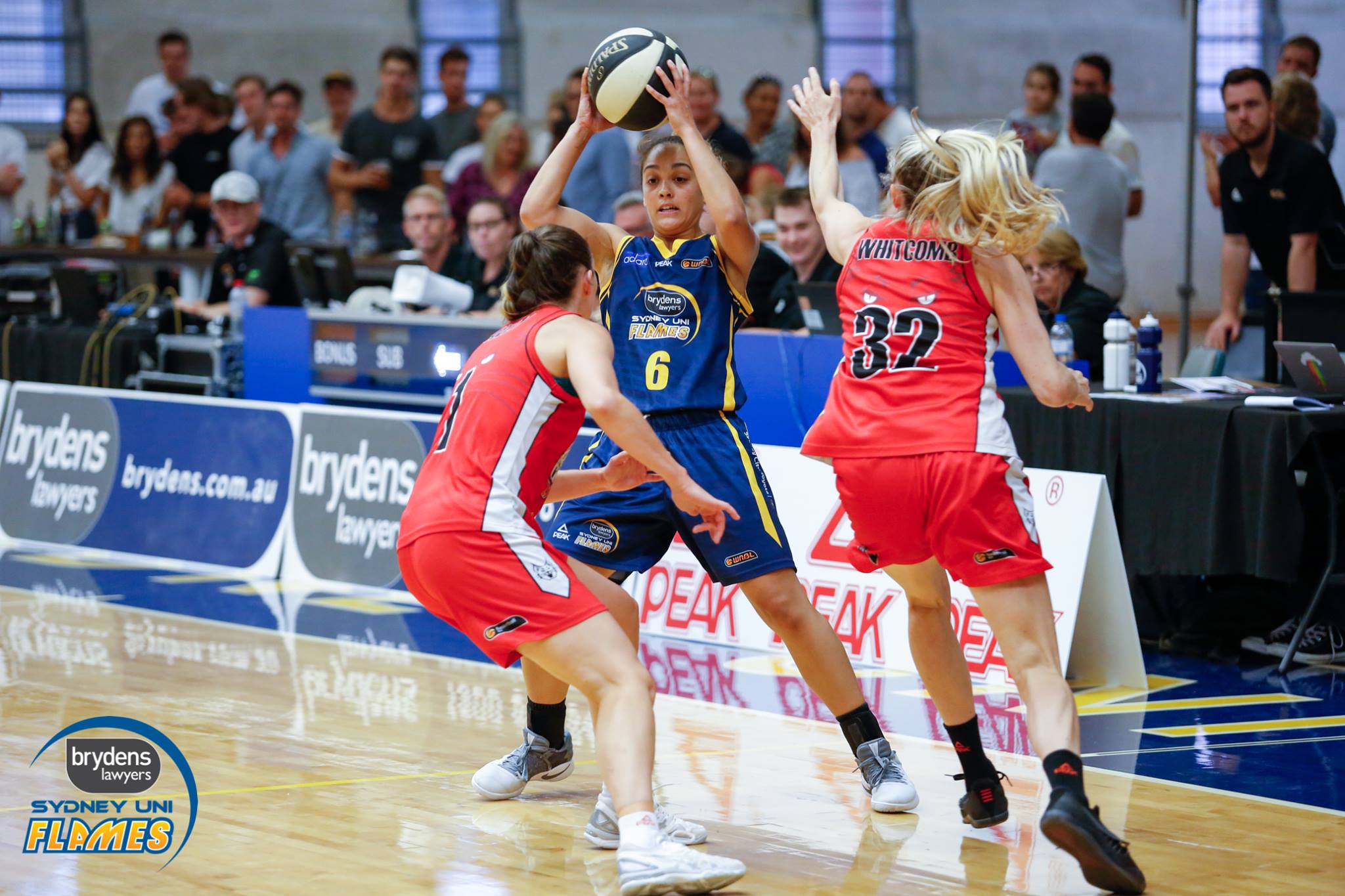 A fourth win from five games has seen the JCU Townsville Fire move back into the top four while the pressure is on the Bendigo Bank Spirit as we head down the final stretch of the regular season to re-gain their form after four consecutive losses.

Townsville upset Gabe Richards’ 250th game with a convincing win over the Spirit to grab fourth place and move ahead 2-1 in the season series with one game to come while also edging ahead with a +10 margin. Suzy Batkovic’s 28 points and 14 rebounds led the way, Mia Murray (18 points) and Natasha Cloud (nine points, seven assists, three steals) starred while Darcee Garbin’s ten points helped the home side win the bench battle 15-8 and the points in the paint battle 52-34. The Spirit were paced by Nayo Raincock-Ekunwe’s 15 points while Blake Dietrick added 14 and Kelsey Griffin had 13 but they could not answer a 12-25 opening term.

Claudia Brassard, Fire coach:ÊÒTurnovers were a factor, we didnÕt give them extra possessions. We spoke about our lack of effort last week and we came out with an aggressive attitude. I think the players came out a lot more focused.Ó

The Flames came up with a huge defensive effort in the fourth quarter to seal an important victory over Perth, out-scoring their opposition 24-12 in the final term after the scores were tied at 66 at three-quarter time. Asia Taylor was yet again a star for the Flames, finishing with 32 points, nine rebounds and four assists, Leilani Mitchell was just as impactful, recording an equal league-high 11 assists for season 2016/17 to go with 17 points, five rebounds and four steals while Jennifer Hamson (ten points, seven boards, five blocks) made life tough for the Lynx in the paint. Carley Mijovic kept the scoreboard ticking over for the visitors with 22 points while Ruth Hamblin collected 14 and nine rebounds. Sami Whitcomb was uncharacteristically quiet on the offensive end, scoring just ten points on 4-17 shooting but contributed in other areas to end the game with six assists and six steals.

Cheryl Chambers, Flames coach:ÊÒWe gave them too many open looks at times. [Whitcomb] is a great player so itÕs important to stay on her and lots of people had goes on her but I thought Ally Wilson got all over her and stuck with her.Ó

Andy Stewart, Lynx coach:ÊÒA couple of times there, we were six or seven points in front but we took the foot off and allowed them a couple of easy looks. We turned the ball over and in a tight game, those things come back and bite you.Ó

The Spirit dropped another spot on the ladder in a devastating weekend for them, falling to the Caps for a fourth straight loss while the home side recorded a third consecutive win to move into fifth. Mansfield impressed with 19 points, five rebounds and five assists while Marianna Tolo had a huge game and came tantalisingly close to a double-double with 28 points, nine rebounds and five blocks, helping to shut down Bendigo in a 21-7 fourth quarter and hold them to 34% shooting overall. Kelsey Griffin paced the Spirit with 20 points while Nadeen Payne came off the bench with ten points and eight boards but they now sit a game outside the top four with five games remaining in the regular season.

Paul Goriss, Capitals coach:ÊÒGetting another win at home is what we want to do. I thought the intensity in the third and fourth quarter was really switched on and I thought the crowd really helped us. I knew going into the fourth that we had to keep the tempo at our pace and to the girlsÕ credit, defensively I thought we won it in the last quarter.Ó

Simon Pritchard, Spirit coach:ÊÒWe played really well, were tough the whole time. There were a few shots that we didnÕt make at the end which pushed the margin out to seven and we had to foul a little bit but it was a pretty close game.Ó

Perth responded to their loss the night before to retain third place with a strong performance over Melbourne after the home side led through most of the first half. Sami Whitcomb (25 points, five assists, two steals), Carley Mijovic (14 points, six rebounds), Brianna Butler (10 points, 3 steals) and Ruth Hamblin with a double-double (17 points, 10 rebounds) all starred for the Lynx as they shot 43% as a team. Maddie Garrick kept the Boomers in it with 21 points and five boards while their second unit impressed as Tegan Cunningham (six points, six rebounds, four assists, three steals) helped them to win the bench battle.

Guy Molloy, Boomers coach:ÊÒI was really proud of the team. WeÕre in a losing season but I feel the team is sticking together really well and I think our endeavour was great. Some turnovers were self-conflicted.Ó

Andy Stewart, Lynx coach:ÊÒIt was a real grind, we were tired, we had only gotten in a few hours before the game. Not having a dayÕs break is pretty painful. You look at how many games Melbourne have lost by a handful of points, you reverse them and theyÕre halfway up the ladder so I donÕt think ladder position is a good indication of where they are at.Ó

Three-time WNBL Champion and seventh on the all-time games played list, Carly Wilson of the Caps called time on her career this week and will finish at the end of this season: http://wnbl.basketball/wilson-calls-time-on-playing-career-with-uc-capitals/

Amanda Lulham of the Daily Telegraph reports that Leilani Mitchell is aiming to represent Australia again at the 2020 Olympics: http://www.dailytelegraph.com.au/sport/swoop/sydney-uni-flames-star-leilani-mitchell-hoping-to-play-at-tokyo-olympics/news-story/6f3188fcc76af7fffe2f289a52d1a8d2

Megan Hustwaite of Leader Newspapers chats to Natalie Novosel who is recovering from a knee injury and building her minutes back up: http://www.heraldsun.com.au/leader/south-east/sport/wnbl-import-nat-novosel-returns-from-injury-to-play-match-winning-role-for-dandenong-rangers/news-story/d8cd446c5a89f4f25d1d40f3f4dafec9

Hustwaite also reports that DandenongÕs win on Saturday night is the beginning of a hectic ten-day stretch for the side: http://www.heraldsun.com.au/leader/south-east/sport/steph-cumming-and-sara-blicavs-combine-for-42-points-in-dandenong-rangers-wnbl-win-over-adelaide/news-story/517eef7de758d2256aaebbdd73bec95b

The Roar looked at the FlamesÕ fourth-quarter blitz that got them over the line against Perth: http://www.theroar.com.au/2017/01/22/final-quarter-blitz-keeps-flames-second/