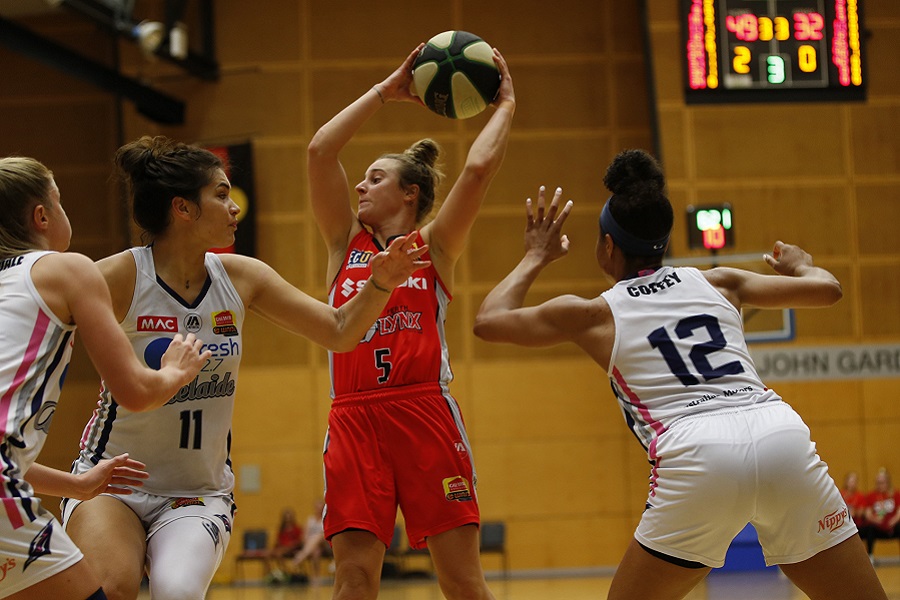 An incredible weekend capped off the 2018/19 regular season with Adelaide coming back from 21 points down against Perth to secure third spot on the ladder while the Caps extended their winning streak to nine in double-overtime against Bendigo.

Having already played in three overtime games this season, Bendigo saved their most exciting contest for last in Simon Pritchard’s final match as head coach. The Spirit took control of the game with a 25-16 second term in a brilliant effort without their import centre in Becca Tobin. However, the Caps slowly reeled them in on the back of Kelsey Griffin (24 points, 20 rebounds, three steals, three blocks) before Leilani Mitchell (five points, nine assists) gave the visitors a three-point lead inside the final minute. Nat Hurst (27 points) replied with a three of her own though and Abbey Wehrung (a career-high 30 points) then had a chance to win it with her lay-up coming agonisingly close to beating the buzzer. In the extra period, Marianna Tolo (27 points, ten rebounds) added a quick five for the Caps and Kia Nurse then put her side up by three again before Marena Whittle (15 points) had another answer for Bendigo, sending the game into a second overtime period with a long-range bomb of her own. Once again, the Caps started the next stanza well as Kelly Wilson (12 points, nine assists) and Nurse (12 points) connected from distance and finally, it was too much for the Spirit despite every player hitting the scoreboard. The win means the Caps now head into the playoffs on the back of a nine-game winning streak, having not lost since mid-December.

Paul Goriss, Caps head coach: “It’s a blessing for us to actually have to grind out a game. We knew they were going to throw everything at us with it being their last game of the season, and with their coach stepping down.”

Every club was donating $100 to Lifeline Australia during Round 15 per three-point make, a cause initiated by Boomers captain Jenna O’Hea and Melbourne made it count as they completed a sweep of the Rangers for 2018/19. Maddie Garrick nailed six three’s for a career-high 28 points on 10-13 shooting as her side hit 12 from beyond the arc for the game. Lindsay Allen (21 points, eight rebounds, six assists), Ezi Magbegor (12 points) and O’Hea (11 points, four assists) all had too much firepower for the Rangers to handle. The home side were paced by Bec Cole who capped off her best season with 26 points and five assists, Betnijah Laney contributed 24 points and in her final game before retirement, Kayla Pedersen had seven points, five boards and a steal.

Larissa Anderson, Rangers head coach: “I thought the girls fought hard, the Boomers played a hell of a game. We had a really bad start but kept fighting back and the girls really played their butts off.”

Maddie Garrick, Boomers: “Basketball is about the ebbs and flows and weathering the storms. We’ve learned to fight back during the season and going into finals if we don’t fight back then we are not going to win.”

In a game that farewelled two legends, Suzy Batkovic and Belinda Snell did not let the crowd down as they starred in one last go-round. Townsville sealed the win on the back of a 25-15 third quarter, with ten players scoring and five reaching double-figures, led by Batkovic’s 14 points. Darcee Garbin (12 points, eight rebounds) and Stella Beck (10 points, five assists) also impressed but after she hit five three’s in the opening term, Snell top-scored with 21 points to go with nine assists. The game was also Cheryl Chambers’ last at the helm of Sydney Uni in a season in which she unfortunately finished with the franchise’s worst ever record at 2-19.

Suzy Batkovic, Fire: “The crowd were just phenomenal. I can’t thank them enough. They really made it a great memory for me. I guess that’s where it starts to sink in that this was the last one, but I’m really stoked the way that all the Townsville people have really embraced me and I love it here.”

After 84 games, it came down to the final contest of the 2018/19 regular season to decide third and fourth place on the ladder. Adelaide knocked in the first three-pointer of the contest but from there, Perth took control and pushed out to as much as a 21-point lead. An 11-0 run for the Lightning trimmed the margin but the Lynx looked to still have the game wrapped up when they responded with their own 7-0 run and the visitors lost Lauren Nicholson (ten points) to a broken nose. However, Adelaide dug deep with Aimie Clydesdale stepping up in Nicholson’s absence, Nia Coffey patrolling the defensive end and Kayla Alexander owning the paint. Alexander (17 points, nine rebounds) hit the lay-up to send the game into overtime, on a brilliant entry pass from Nicole Seekamp (11 points, nine rebounds, five assists) as Adelaide finished in a flurry. In the extra period, Asia Taylor (15 points, two steals, two blocks) put Perth in front by a point with under a minute remaining but Clydesdale (17 points) immediately responded. The Lynx could then not sink another basket as Coffey (20 points, nine boards, seven blocks) claimed consecutive rejections, including one on the buzzer against Alison Schwagmeyer (19 points) to seal the win. Adelaide’s incredible comeback places them in the second Semi-Final series against Melbourne while Perth will need to re-group quickly to take on the UC Capitals in the first Semi-Final series.

Andy Stewart, Lynx head coach: “Adelaide played a great second half, we as a group made poor decisions and it cost us dearly. We feel shattered.”

Chris Lucas, Lightning head coach: “I’m really happy with the character of the team. We showed a bit of fight and heart. We did a lot better job in the second half which gave us the chance.”

The Semi-Finals structure has been officially locked in: http://wnbl.basketball/blog/news/2018-19-semi-finals-series-locked-in/

Caden Helmers recapped an instant thriller between the Caps and Bendigo for the Canberra Times: https://www.canberratimes.com.au/sport/basketball/double-ot-a-blessing-in-disguise-for-finals-bound-capitals-20190119-p50sdp.html

Trent Slatter of the Townsville Bulletin recapped the Fire’s win as they farewelled Batkovic in style: https://www.townsvillebulletin.com.au/sport/townsville-fire-farewell-captain-suzy-batkovic-in-style-with-9082-win-over-sydney-flames/news-story/0edd3b5edd960b63d72ee16d6c682814