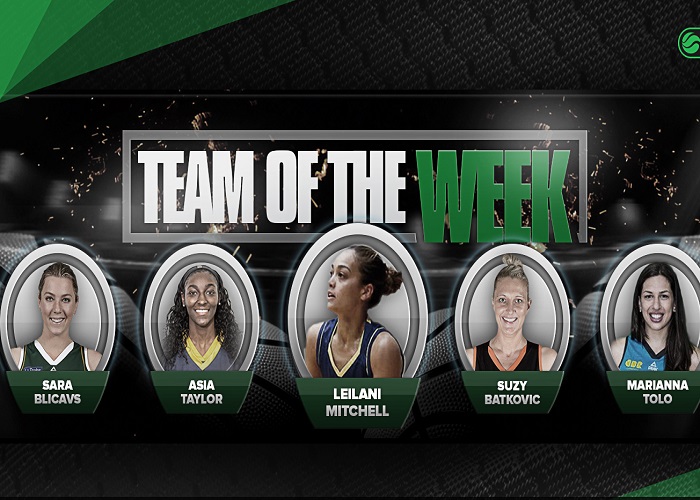 ROUND 15 TEAM OF THE WEEK

Three members of the Round 15 Team of the Week have backed up their performance from the previous round including Player of the Week, Leilani Mitchell from the Brydens Sydney University Flames.

Her nomination is the sixth for 2016/17 andÊthe third in the past four weeks.

She is joined by JCU Townsville Fire’s Suzy Batkovic who recorded a double-double of 28 points and 14 rebounds in a win over the Spirit to help move her side back into the top four.

After a quiet start to the season, Batkovic is now just one nomination off her record from 2015/16, with seven Team of the Week awards including six of the past seven weeks.

Marianna Tolo (University of Canberra Capitals) is the third member returning from Round 14 and it is her fifth nomination for the season.

She also starred in an important victory over Bendigo, collecting 28 points, nine rebounds, two steals and five blocks in a strong performance at both ends of the floor.

Asia Taylor is the second Flames member in Round 15’s Team of the Week, scoring a round-high 32 points to go with nine boards and four assists in a scintillating tandem with Mitchell.

Named for the first time since Round 12, this is Taylor’s seventh nomination for the season which is the equal-second most in the league.

Rounding out the team is Jayco Dandenong Rangers’ Sara Blicavs who did a bit of everything in a win over the Lightning, tallying 20 points, four rebounds, four assists and five steals.

This is her fourth appearance in Team of the Week.