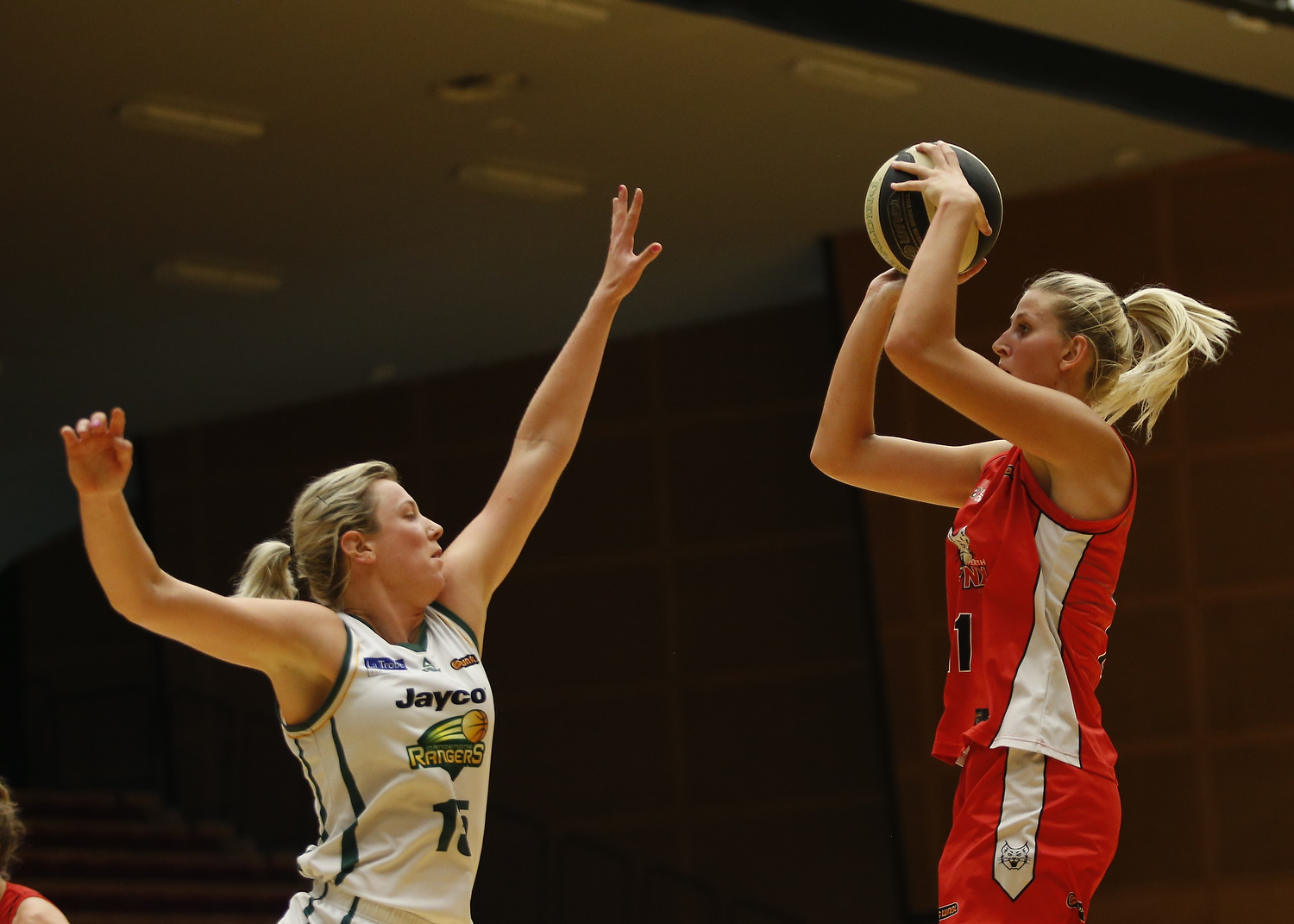 Five wins on the trot for the Brydens Sydney University Flames has seen them move to the top of the ladder and become the first team to officially earn a playoff position, a sweep of Round 16 for the Perth Lynx saw them keep their top two hopes alive and the battle for the fourth and final playoff spot remains extremely tight.

Guy Molloy, Boomers coach:ÊÒAgainst teams with the calibre of players that Dandenong have, if you make a few mental errors you are going to pay and thatÕs what happened to us in a little patch. I was really proud of the girlsÕ effort and how diligently they stuck to the game plan. I thought Alice [Kunek] really led as captain.Ó

Larissa Anderson, Rangers coach:ÊÒIt does seem to always be a close contest [between us]. IÕm really proud of our group, there are different players stepping up each week. ItÕs a game weÕll look at and break up the little things but there was some really good stuff out there.Ó

In an Australia Day thriller, the Flames were forced to hold on following a 21-13 third term as the Capitals finished strong but a Leilani Mitchell floater inside the final ten seconds sealed the victory for the visitors. A classic performance from Belinda Snell saw the veteran finishÊwith 30 points, eightÊrebounds, fourÊassists and two blocks whileÊmoving into eighth place on the all-time points scored list and Mitchell (16 points) and Asia Taylor (13 points) were also handy contributors. The home side received strong contributions from their starting line-up, with four of the five reaching doubleÊdigits led byÊMarianna Tolo (16 points, 11 rebounds), Lauren Mansfield (16 points, eightÊassists) and Mikaela Ruef (15 points, ten boards) but they were-outscored as a team 24-50 in the paint.

Carly Wilson, Capitals:ÊÒ”If you look at it and can get 14 wins, that might get you into the top four so if we can keep winning we’re in with a shot. That one stings, but it’s definitely not over and we don’t look at it that way. Sydney has been one of the form teams … we still take confidence.Ó

Cheryl Chambers, Flames coach:ÊÒLeilani landed a two-point floater as calm as you like. She was incredible and so was Snelly. She was directing traffic, shooting, passing, getting it all together. They deserved this win.Ó

Perth looked to be in trouble early in the second half, trailing by nine points, but they put together an 18-2 run across the third and fourth quarters for their first winning streak on the season since Round 6. Sami Whitcomb scored 18 points in the first term before finishing with 23, six rebounds and five steals, Antonia Edmondson had 14 points while Tenaya Phillips added 13 in 13 minutes to finish off the home side. For the Lightning, Laura Hodges recorded 23 points on 11-18 shooting, Sam Logic had seven points, eight boards and six assists and Colleen Planeta tallied nine points and six rebounds off the bench.

The Spirit withstood an impressive effort by the Boomers in a must-win game for the home side that keeps their playoffs hopes alive. In a game of runs, Bendigo locked in defensively to hold their opposition to just nine fourth quarter points and secure the victory as Nayo Raincock-Ekunwe dominated off the bench with 27 points and ten rebounds. While they only shot 38% as a team, their defence proved pivotal as they held the Boomers to just 31% with Alice Kunek, Bec Cole and Olivia Thompson scoring 15 points apiece.

Simon Pritchard, Spirit coach:ÊÒItÕs great to be in the winners column, weÕve worked very hard under a fair bit of pressure. WeÕve worked so hard in the first part of the season, weÕve lost our momentum but itÕs good to see tonight that we have that back. Nayo took the game by the horns and helped us convert our effort into a win.Ó

Guy Molloy, Boomers coach:ÊÒThe game became very pressured and sometimes you get shortcuts on what you have been doing well through most of the game. We just lacked some easy baskets in the fourth quarter, we had plenty of good looks we just couldnÕt make them.Ó

In an absolute classic and another nail-biter between these teams in 2016/17, the Flames held on for a huge road win over Townsville to dent the defending championsÕ finals aspirations while also clinching the season series. After trailing for the entire game, Sydney took the lead with three minutes remaining but was only able to clinch the victory when Suzy Batkovic missed two free throws and Mia Murray missed the subsequent put back in the dying moments. Leilani Mitchell led the Flames in the scoring department with 15 while Jennifer Hamson doubled-up with 11 points and ten rebounds. In an all-around team effort, Belinda Snell (14 points, six assists) and Asia Taylor (12 rebounds, five assists) were key contributors while Batkovic paced the home side with 21 points and Micaela Cocks added 13 in her 150th game.

Claudia Brassard, Fire coach:ÊÒMore disappointing was our defence which just wasnÕt good enough down the stretch. ItÕs like we went back to being high school basketballers, we couldnÕt make a pass or find the open player.Ó

Cheryl Chambers, Flames coach:ÊÒLast time was heartbreaking and this time theyÕre probably feeling a bit hard done by. I knew there was a margin [in the season series] and when they got out a bit, I started to think about that but all of a sudden, our girls lifted and we were back in the game.Ó

Perth held off several Rangers runs to keep their top two hopes and season series alive in a game they led from start to finish. Sami Whitcomb (27 points, six rebounds, four assists) scored 12 in the final term to help clinch the win while Perth hit five three-pointers in that quarter, shooting 15-29 overall. Five players reached double-figures in scoring with Ruth Hamblin (12 points, eight rebounds, four blocks) and Brianna Butler (12 points) playing their roles. For the Rangers, Natalie Novosel (20 points, three boards, five assists, three steals) and Ally Malott (18 points) came up big off the bench. The win for the Lynx also helped the Flames move into top spot on the ladder at the end of Round 16.

Andy Stewart, Lynx coach:ÊÒWe donÕt believe Dandenong are a bogey team, they have just played well and taken us out of our games the first couple of times. Our whole game plan is starting to come together and we know when weÕre on song, we can pretty much beat anybody.Ó

Larissa Anderson, Rangers coach:ÊÒIÕm really annoyed with our defensive effort but we knew they would come out fired up. To allow five players in double-figures is inexcusable, it was finals-like basketball tonight and we didnÕt get it done defensively.Ó

Swoop reported on the FlamesÕ Australia Day nail-biter against the Caps: http://www.dailytelegraph.com.au/sport/swoop/flames-star-leilani-mitchell-lands-clutch-jumper-to-sink-canberra-capital/news-story/5776e01abe9fd6a6a138ac88c4374590

Laura Hodges speaks to the Sports Source about the LightningÕs two maiden wins after New YearÕs and reflects on her friendship with Carly Wilson who announced her retirement last week: http://www.thesportssource.com.au/home/lauras-lowdown-part-4

Roy Ward covers the Australia Day Eve contest between Dandenong and Melbourne for The Age: http://www.theage.com.au/sport/basketball/wnbl-dandenong-rangers-keep-winning-against-melbourne-boomers-20170125-gtypov.html

Megan Hustwaite wrote on the lack of execution in the BoomersÕ road loss to Bendigo: http://www.heraldsun.com.au/leader/outer-east/sport/melbourne-boomers-fail-to-finish-in-wnbl-road-fixture-against-bendigo-spirit/news-story/b78469d3f31c017916b26f858133c8a2

A heartbreaking loss has not destroyed the CapsÕ playoffs hopes writes Chris Dutton for The Age: http://www.theage.com.au/sport/basketball/canberra-capitals-suffer-wnbl-heartbreak-in-lastsecond-loss-to-sydney-uni-flames-20170125-gtyw24.html

There was also heartbreak for Townsville in a narrow loss to the Flames writes Trent Slatter of the Townsville Bulletin: http://www.townsvillebulletin.com.au/sport/heartbreak-for-townsville-fire-as-sydney-snatches-lastditch-win/news-story/106ab1a1cdc42df5745d469b4d061e69

The Bendigo Advertiser looks at the Round 16 results which have fallen favourably for the Spirit: http://www.bendigoadvertiser.com.au/story/4432444/weekend-results-fall-spirits-way/?cs=2457