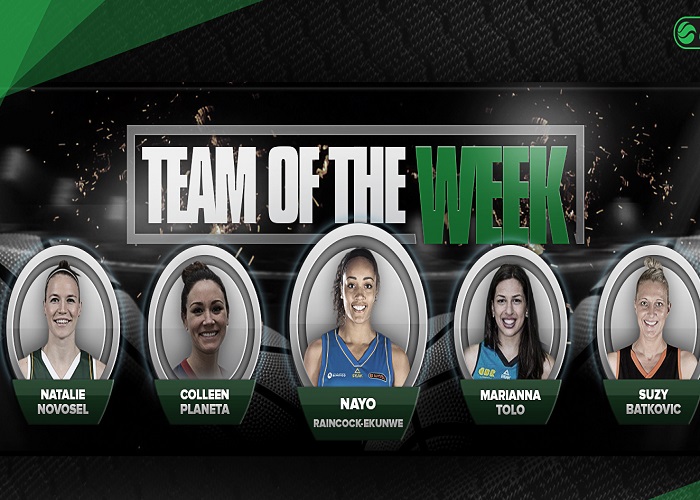 ROUND 19 TEAM OF THE WEEK

The 19th and final Team of the Week for the 2016/17 has seen five players from five different teams named.

After winning her second Player of the Week award, Bendigo Bank Spirit’s Nayo Raincock-Ekunwe has earned her fifth nomination for the year after averaging 16 points and 8.5 rebounds across two games while hitting the game-winner against Perth.

Natalie Novosel came off the bench for the Jayco Dandenong Rangers in their own victory over Perth, dismantling them with 18 points, seven rebounds, two assists and four steals.

Named in the first week of the season, Novosel caps off the year with a second Team of the Week nomination in Round 19.

They are joined by Colleen Planeta who helped the Adelaide Lightning split their weekend with an average of 25 points, eight boards, three assists and 1.5 blocks.

Alongside Novosel, this is Planeta’s second Team of the Week award.

Nominated for an eighth timeÊincluding five of the past six rounds, Marianna Tolo of the University of Canberra Capitals has finished off a very strong season.

While the Caps’ playoff hopes were dashed on Thursday night, Tolo held her own in the paint with 16 points, seven rebounds, 3.5 assists, three steals and 2.5 blocks across two games.

Rounding out the five is JCU Townsville Fire’s Suzy Batkovic who has beaten her previous record from last season with a ninth nomination for 2016/17.

She recorded a game-high double-double of 26 points and 14 rebounds with three blocks despite the Fire’s loss to the Caps.

The top five most nominated players in the 2016/17 Team of the Week: