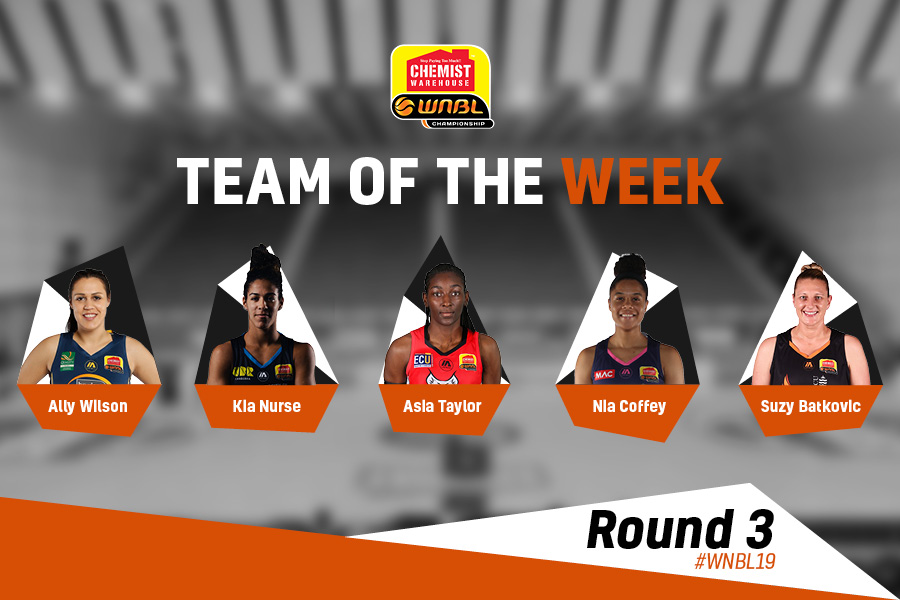 ROUND 3 TEAM OF THE WEEK

Five teams are represented in the Round 3 Chemist Warehouse WNBL Team of the Week as Perth’s Asia Taylor heads up the squad after earning Player of the Week honours while being joined by Kia Nurse, Nia Coffey, Suzy Batkovic and Ally Wilson.

Asia Taylor’s spot in the team is assured after she was awarded the Player of the Week for her impressive performances across Perth’s two wins.

Taylor put up 24.5 points and 8.5 rebounds across the Lynx’s successful double-header, helping them seure a win over Bendigo in a game where they nearly relinquished a 28-point lead before putting together another dominant performance on Sunday against Dandenong.

Top scoring for the Lynx in that game, Taylor put up 23 points while also wreaking havoc on the glass, coming up with five offensive rebounds.

Kia Nurse has been putting up big numbers so far this season, averaging 20.3 points per contest and despite falling to Melbourne on Friday night, recorded another 29 points and five rebounds.

Trailing by 17 points at the end of the third, Nurse scored nine last quarter points to bring the Capitals within reach before they just fell short, 78-84.

Nurse was a threat from all areas of the floor as she scored both inside and from behind the arc, hitting three triples for the game. Even with her versatile shooting ability, it was her drives to the basket that forced the opposition to foul her and helped Nurse shoot 12-16 from the free-throw line.

Nia Coffey put up a monstrous stat-line on Sunday afternoon as Adelaide trounced the Spirit in the second half.

Coffey dominated the paint from the get-go as she amassed a whopping 20 rebounds for the game, including an impressive eight offensive boards.

The #5 pick in the 2017 WNBA Draft also had 21 points on 7-20 shooting and 6-8 from the free-throw line. The Lightning owned the second half, outscoring the Spirit by 27 and helping them run away to a 91-63 win as Coffey scored 12 points and hit a three in the final two quarters.

Her efforts marked the first 20-20 performance this season.

Suzy Batkovic and her Townsville Fire encountered a valiant Flames outfit on Saturday afternoon as the short-handed visitors pushed the Fire all the way to the final possession.

It was Batkovic who steadied the home-team in the final period though, scoring 13 points in the fourth frame to lift the Fire over the Flames, 79-76.

Batkovic had the top scoring performance of the round as she posted 30 points and 12 rebounds. The Fire needed their inspirational leader to help them over the line on Saturday and Batkovic came to the party when it mattered.

The Flames entered into their clash with Townsville with three starters missing and an 0-3 record.

Trailing by two points at the start of the last period, Ally Wilson wasted no time as she hit a three on the team’s first possession. The shot was a sign of things to come as Wilson hit four triples in the last period on her way to 14 fourth quarter points. At one stage, Wilson had scored eight points inside a minute to give the Flames a six point lead with three minutes remaining on the clock.

Unfortunately, the Fire managed to come back and steal victory despite the incredible effort from Wilson that also saw her tally eight assists in the absence of their starting point guard.