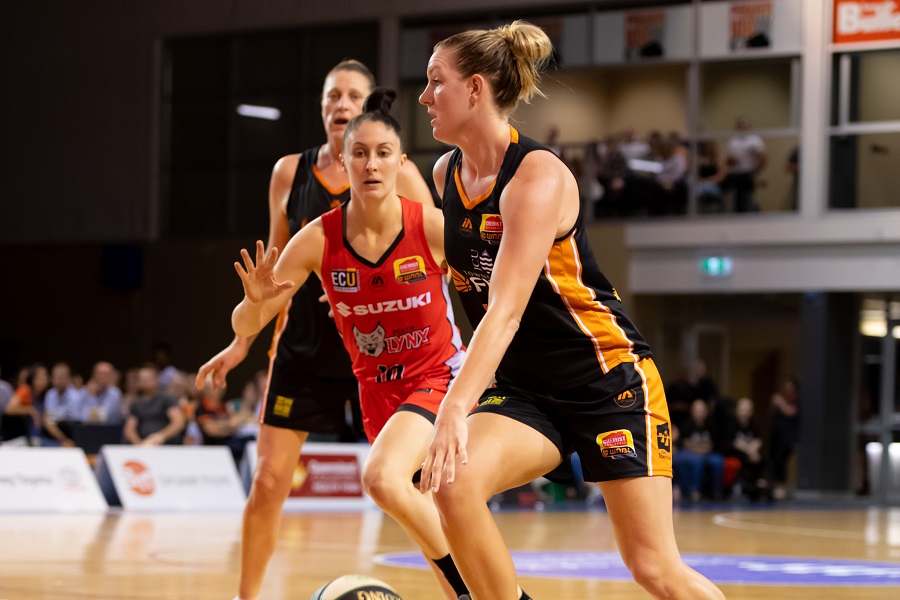 The Perth Lynx have defied fatigue to win their fourth game in nine days and cement top spot on the ladder while the Bendigo Bank Spirit, winning both their games in Round 4 to move into third place.

Despite leading for a majority of the first half, Perth found themselves trailing Sydney Uni by seven midway through the third quarter. From that point on they suffocated the Flames though, out-scoring them 36-13 to finish the game while also holding them scoreless in the last five minutes. Against their old side, Katie Ebzery top-scored with 22 points while Asia Taylor had all 13 of her points in the fourth quarter to finish with a double-double. Alex Wilson paced the home side with 16 points as four starters scored in double-figures.

Cheryl Chambers, Flames head coach: “It’s disappointing. We needed that win. We are still feeling the effects of all the injuries but we have to win soon.”

Tallying a season high for the league and becoming the first team to hit the century mark, Melbourne dominated in the opening clash of the 2018/19 Michele Timms Cup. Steph Talbot (27 points, five assists, two steals, two blocks) and Jenna O’Hea (15 points, three steals) set the tone with a three-point barrage before Lindsay Allen (18 points, five assists) and Maddie Garrick (18 points, three steals) finished the Rangers off. Dandenong were paced by 37 combined points from Rachel Jarry and Bec Cole in their third straight loss.

Larissa Anderson, Rangers head coach: “We were a lot better offensively in the first half but we just allow teams to score way too many points at the moment so defensively we’re letting ourselves down. We didn’t show the discipline that we’ve been working hard on and they capitalised off it.”

Guy Molloy, Boomers head coach: “We knew it would be a tough game, we had to play hard but I thought we executed well throughout the game. We looked like a pick-up team in the first few games but we are starting to find our way.”

An inspired Nat Hurst led the Spirit to snap a two-game losing streak as Bendigo celebrated her 250th game while spoiling the night for Adelaide coach Chris Lucas who was commemorating his 250th game on the sidelines. The Spirit captain finished with 14 points and ten rebounds while Becca Tobin was also outstanding with 13 points, 12 rebounds, five assists and two blocks as the home side held the Lightning to 31% shooting overall. Hurst also out-scored Adelaide by herself from beyond the arc with four three-pointers as only Nia Coffey (13 points) reached double-digits for the visitors.

Simon Pritchard, Spirit head coach: “Our captain (Nat Hurst) asked for a reaction out of the girls and she was pretty adamant that there needed to be a response defensively and that we couldn’t let ourselves down with our performance.”

Despite playing their fourth game in nine days, Perth claimed a fifth-straight victory and their second over Townsville this season with an overtime thriller. Leading by as much as 21 points in the first half after a 9-0 start, the Lynx had to do it the tough way as Townsville forced overtime with a 16-6 final quarter, capped by three free-throws from Micaela Cocks on the buzzer. The Lynx were too good in the extra period though, succeeding with a 13-5 run in the last five minutes. Brittany McPhee had a double-double of 20 points and ten rebounds while Asia Taylor (18 points, seven rebounds, three assist, two steals, two blocks) did a bit of everything to answer Suzy Batkovic’s 23 points and 12 boards.

Mark Wrobel, Fire acting coach: “It’s not all doom and gloom. In the second half, we started to defend in the manner that we would expect – but we clearly used up a lot of energy coming back from so far behind.”

A 10-23 second term ultimately doomed the Flames as they stayed winless on the season with their third loss of five points or less. They did make things interesting late with four quick points from Alex Bunton (13 points, 11 rebounds) and a Sarah Graham three-pointer making it a three-point game with 24 seconds to go. Kia Nurse (16 points) sealed the victory from the free-throw line though, backed up by Kelly Wilson’s 17 points and Kelsey Griffin (15 points, 13 rebounds) as the UC Caps remained in second spot on the ladder. Belinda Snell did all she could with 16 points and ten assists.

Paul Goriss, Caps head coach: “We just needed to change something and have more perimeter threats so going with the Mosquito Squad really worked. It puts more pressure defensively, but it also gives us more scoring power and I think Maddi Rocci’s done an excellent job for us.”

Cheryl Chambers, Flames coach: “It’s disappointing to be so close and then not get the win again. We aren’t getting across the line because we don’t have the leadership and experience of other teams.’’

Bendigo claimed a sweep of Round 4 with their second victory Melbourne for the season, leap-frogging them into third place on the ladder in the process. Nat Hurst (25 points, two steals) was sensational, scoring eight points in the final term while Nadeen Payne added 12 points, nine rebounds. For the Boomers, Steph Talbot capped a strong weekend with 21 points to pace the home side.

Amanda Lulham of the Daily Telegraph recapped Thursday night’s clash as the Flames were snuffed out by the Lynx: https://www.dailytelegraph.com.au/sport/swoop/wnbl-league-leaders-perth-lynx-snuff-out-plucky-sydney-uni-flames/news-story/adddb29bdea4ea5ebef2fdd8e1b8c79c

Lulham then followed up on the Flames’ sixth consecutive defeat on Sunday: https://www.dailytelegraph.com.au/sport/swoop/sydney-uni-flames-suffer-sixth-straight-loss-in-wnbl-to-canberra-capitals/news-story/f7a486ec675e522b23b109f88efb73cf

Roy Ward of The Age covered Melbourne’s victory over Dandenong to go up 1-0 in the 2018/19 Michele Timms Cup: https://www.theage.com.au/sport/basketball/melbourne-boomers-click-on-offence-in-win-over-rangers-20181103-p50dtx.html

Ben Waterworth from Fox Sports reported on a scary moment for Maddie Garrick following the Boomers’ win over Dandenong on Saturday: https://www.foxsports.com.au/basketball/wnbl/wnbl-201819-dandenong-rangers-v-melbourne-boomers-maddie-garrick-taken-to-hospital-after-oncourt-scare/news-story/43a1d638b15b13ff30d49aee7be40549

Luke West of the Bendigo Advertiser analysed the Spirit’s turnaround after they fell to Adelaide just last week: https://www.bendigoadvertiser.com.au/story/5738427/wnbl-bendigo-spirit-strangles-lightning-in-46-point-turnaround/?cs=81

David Polkinghorne of the Canberra Times covered the Caps’ win over Sydney Uni with thanks to their ‘Mosquito Fleet’: https://www.canberratimes.com.au/sport/basketball/mosquito-squad-helps-capitals-to-snuff-out-flames-20181104-p50dwc.html

PerthNow reported on the Lynx’s efforts as they have cemented top spot on the ladder: https://www.perthnow.com.au/sport/basketball/perth-lynx-cement-wnbl-top-spot-ng-s-1903519

Adam Bourke wrote up Bendigo’s gutsy win over the Boomers on Melbourne Cup Eve for the Bendigo Advertiser: https://www.bendigoadvertiser.com.au/story/5741708/gutsy-spirit-upstage-melbourne-boomers-in-wnbl/?cs=81