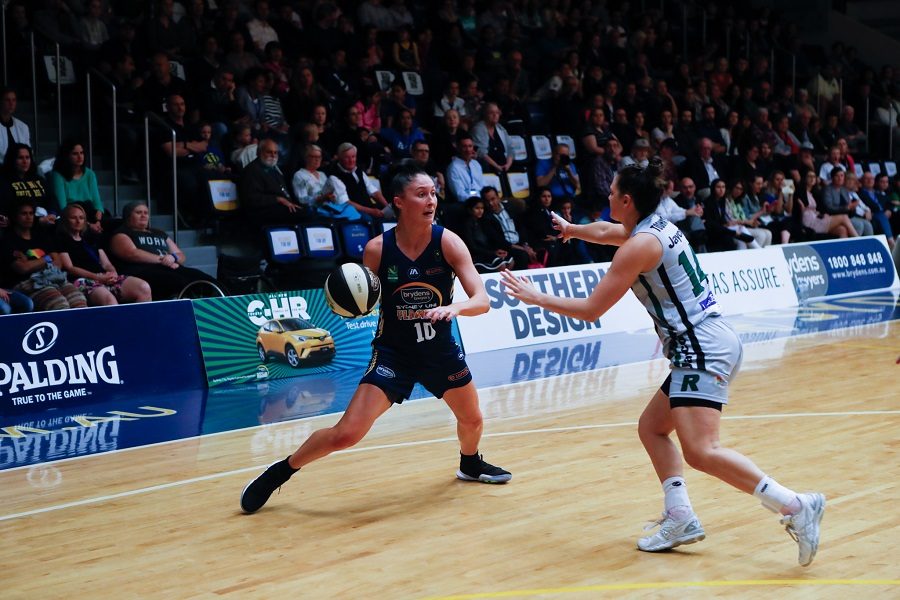 Last year’s Champions come up against the early title favourites on Friday night while the Flames also have the opportunity to leapfrog the Boomers into first place on the ladder.

After dropping the opening game of the season, Sydney Uni have won three in a row but it has not been easy with an average margin of just seven points including a three-point victory over Townsville last round.

The Flames’ starting five can match it with any team in the competition but it is when they go to their bench that they can struggle which makes for an interesting contest against the Boomers whose roster has been hit with injuries.

Courtney Duever is out for the season while Bec Ott has also been sidelined which will hurt their depth but more concerning for Melbourne is Jenna O’Hea’s injured calf which could see her miss a month.

They will be hoping to get Louella Tomlinson on court this weekend in time to replace O’Hea which will take some pressure off Liz Cambage.

The reigning Player of the Week proved she can handle the front court duties on her own last weekend, dominating Perth with 23 points and 23 rebounds but coming up against Jennifer Hamson and Asia Taylor will be a test for Cambage.

Brittany Smart and Maddie Garrick also chimed in during that Round 3 victory, combining for 31 points on 11-24 shooting and they will need another impactful game on Friday night to combat the likes of Alex Wilson and Belinda Snell.

Playing at home for just the second time this season, the Flames will be keen to make a statement against the current ladder leaders.

Having met in last year’s Semi-Finals, the Lynx and Rangers are in unfamiliar territory to start this season although recent performances seem to show both sides getting their 2017/18 campaigns on track.

Perth thrashed the Spirit in Round 3 and then pushed Melbourne all the way, falling by just two points in overtime while Dandenong swept the weekend with confident performances against Townsville and the Capitals.

Courtney Williams and Sami Whitcomb are beginning to gel in the back court for the Lynx but even more impressive have been the numbers produced by Alice Kunek (11.1 points at 40% shooting per game) and Kayla Standish (13.8 points at 48%).

The Rangers will be relying on the defensive prowess of Amelia Todhunter and Tessa Lavey to keep Perth’s guards quiet while Laia Palau will be riding high from her game-winner over Canberra but they need more Team of the Week-type performances from Sara Blicavs and Carley Mijovic to match the Lynx’s overall offensive output.

The Spirit start a three-game home stand on Friday in a period in which they can set up their season while Adelaide will be coming off a game on Wednesday night.

If the game goes down to the wire as it did last round when these sides met, Bendigo will back themselves to outgun their opponents but they will have to do it without Betnijah Laney.

After Laney went down with a knee injury in their meeting with Adelaide last round, the Spirit fought all the way and took the contest into overtime thanks to 22 points from Gabe Richards and a double-double from Kelsey Griffin (17 points, 16 rebounds).

However, Planeta and Abby Bishop (16 points, 11 boards) were able to match them and the performance of Natalie Novosel (19 points, six assists) got them over the line.

It will be interesting to see how the Spirit perform in the absence of Laney and Adelaide will aim to punish them in transition without Laney’s speed or athleticism.

After a game on Wednesday night, the Caps return home to host Townsville with spots in the top four up for grabs.

The Fire defeated Canberra when they last met in Round 2 but since then, have dropped two straight games while only averaging 66 points which is more than ten points below what the Caps are averaging in 2017/18.

Coach Claudia Brassard addressed Townsville’s effort, particularly on the glass, so the hosts will need to be ready for a fired-up side that is keen to prove themselves.

Cayla George and Suzy Batkovic are a particular worry for the Caps, having combined for 34 points and 21 boards a fortnight ago although Nat Hurst tore them up with 13 points and six assists and will be intent on controlling the tempo after Townsville ran over the top of them in the second half of their Round 2 clash.

Backing up from that game against the Caps, Townsville return home on Sunday for a meeting with the Boomers who will also be playing their second game of the round.

The Fire own the least productive offence in the competition and only scored 63 points when they met Melbourne in Round 1 but if their defence holds up as it did in that game, Melbourne will be in for a real dogfight.

They shot just 31% in that meeting, tallying a season-low 54 points and Cambage only scored 15, even with Batkovic suffering foul trouble. If the Fire centre can stay on court, she will make life difficult for Cambage and with those two battling under the rim, the door will be open for George.

With Sydney Wiese also now settled into the team, her long-range game will play a factor while Laurin Mincy and Kelly Wilson will aim to run the Boomers’ back court off their feet.

After a relatively quiet start to the season for the Rangers, they will be playing their fourth match in nine days against the Flames who will be backing up from a home game on Friday night.

Sydney Uni return to Dandenong Stadium for the first time since they clinched the 2016/17 Championship while they will also be featuring in their first FOX Sports game of the season.

When they clashed in Round 2, Asia Taylor was the heroine as she tallied 17 points and 11 rebounds while also knocking down the game-sealing three-pointer in the dying seconds.

All five starters scored in double-figures as well but Dandenong’s bench is becoming more prevalent and a player like Palau could provide a real headache for the Flames while the Rangers will also be looking to Tayla Roberts to step up and help contain the Sydney Uni forwards.