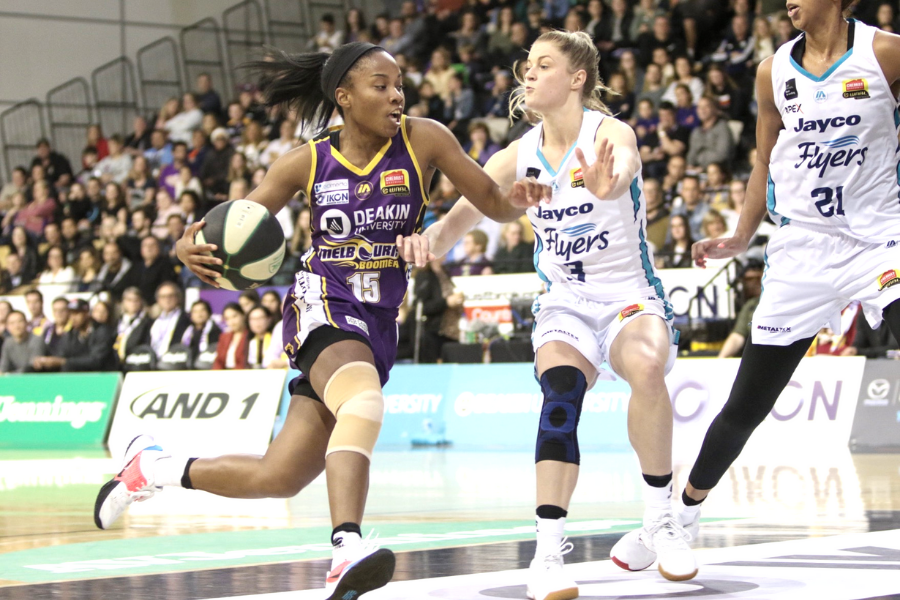 Not forgetting the Flyers went 6-0 after playing just over 24 hours earlier, beating Bendigo Spirit at Dandenong Stadium, while the Boomers were rested ahead of their lone fixture of Round 4.

“I think we’re really blessed because not only have we got players who are physically strong but they are mentally tough and that makes it a lot easier,’’ Chambers said.

“If you had of said we’d be 6-0 I’m not sure I’d believe you. It’s a bit of a dream start. I know reality’s there, there’s not many teams that could keep going through undefeated and we know we have our work cut out for us – Canberra will come at us on Thursday.

“There’s a little bit more time so we’ll rest up, put some bets on the horses and get back together as a group on Wednesday, have a really light session and be ready for Thursday.”

Southside’s starters all scored in double figures in both games, an impressive feat given the short turnaround.

Abigail Wehrung (16 points) is revelling in her new role under coach Tracy York, Becca Tobin (12 points, 12 rebounds) returned from concussion for her first game of the season and had an immediate impact. Kelly Wilson had 7 points and 7 assists, Demi Skinner hit 11 points and Shyla Heal and Carley Ernst added 8 each.

Tellingly, the Spirit conjured 37 points from their bench in comparison to Adelaide’s 0.

Putting a horror Round 3 behind them, as expected it was a much-improved Canberra across the floor turning the tables on the Flames in their Indigenous Round fixture at AIS Arena.

Alice Kunek (17 points) and Jessica Kuster (16 points) led scoring for the Flames, while Lauren Scherf grabbed 9 boards against her former side.

If waiting four games wasn’t enough, the Fire then endured overtime before claiming their maiden win of the season.

It was another heartbreaker for the Lynx who have suffered three overtime defeats in as many rounds, two consecutive extra time losses at home.

The bright light for Perth was the sparkling debut of import Ariel Atkins who put up 19 points, 7 rebounds and 4 assists. Alison Schwagmeyer-Belger (23 points) topped the stat sheet for the home team.

These sides met just a week earlier in Traralgon but this rematch was a much tighter tussle in front of an energetic Dandenong Stadium crowd.

Bec Cole (23 points) was full of confidence and energy, Sara Blicavs put Bendigo to the sword in Round 3 and took this game in her hands scoring 16 of her 21 points in the final quarter, while Mercedes Russell (15 rebounds, 12 points) and Tobin (16 points, six rebounds) went to battle in an intriguing match-up.

Wilson (15 points, 7 assists, 4 rebounds) and Wehrung (13 points) were among the visitors’ best performers.

The build up and anticipation around this derby was huge and the contest, in front of a bumper crowd at Boomerland, didn’t disappoint.

Ultimately, the Flyers led from start to finish at the State Basketball Centre and were paced early by Mitchell (13 points, 4 assists). It was Russell, in her first Michele Timms Cup who rose to the occasion with a team-high 19 points, 11 rebounds and 3 assists on the big stage. O’Hea (13 points, 3 rebounds) hit some big shots against her former side, while Blicavs (16 points, 3 rebounds, 2 assists) and Cole (14 points, 6 assists, 4 rebounds) completed big individual weekends.