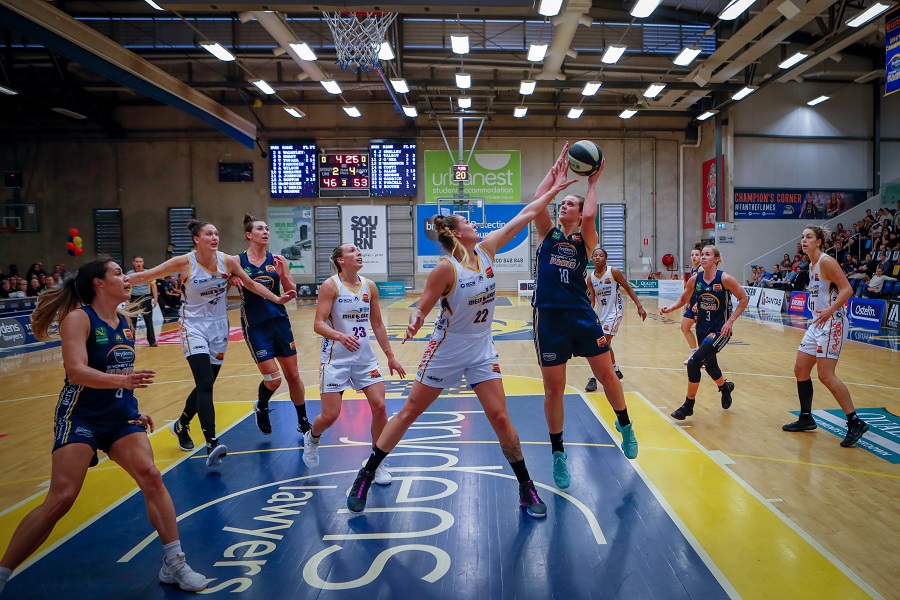 Saturday’s top of the table clash is set to be one the biggest games of the season as the UC Capitals (4-1) travel west to face the red-hot Perth Lynx (5-1).

Perth are in the midst of a five-game winning streak after an extremely impressive fortnight which saw them win four games in four different cities and three on the road.

They completed a successful double-header in Round 4 over the Flames and Fire with the likes of Brittany McPhee and Asia Taylor controlling proceedings while four players scored in double-figures in both contests.

The UC Capitals will be a tough test for the Lynx though as the Caps boast an array of scoring options as well as a strong presence on the glass which aided them in a hard-fought victory over Sydney Uni in Round 4.

Two early season MVP candidates will face off on Saturday as October Player of the Month Kia Nurse goes head-to-head with Taylor.

Both can be imposing presences in the paint while also enjoying getting out in the open floor but the assistance of Kelsey Griffin, who is averaging a double-double of 17.2 points and 10.6 rebounds, will be beneficial to Nurse’s chances.

Following a delayed start to the season, Leilani Mitchell is settling into the season and she scored ten points in 29 minutes last weekend.

Coach Paul Goriss was able to play her alongside Kelly Wilson down the stretch and their calming influence and confidence with the ball helped them secure a tight victory against the Flames.

Back at home for the first time since the start of Round 3, Perth will be keen to maintain their winning streak in front of their faithful but the Caps can reclaim their place on top of the ladder with a win which adds further intrigue to this contest.

After a Round 4 double-header and a Melbourne Cup Eve heartbreaker, the Boomers suit up to tip off Round 5 against the winless Sydney Uni.

Maddie Garrick is set to return in this contest after a health scare and will chalk up 200 games. She is averaging 12.5 points per game, the fourth straight season she has averaged double-figures in scoring and that is helping the Boomers to produce the third most efficient offence in the competition.

That will test the Flames, who own the second least productive offence in the league and they are on the road for the second straight game after falling to the Caps last Sunday.

Their 0-6 record is slightly deceiving though as they have dropped three games by five points or less and they will be hoping that their bad luck will soon run out while the Boomers have lost all three games at home which will also give them hope.

Belinda Snell is back in the line-up and had a big outing last weekend against the Caps with a double-double of 16 points and ten assists while another week of training will help Alex Bunton as she aims to return to 100% health.

Tahlia Tupaea may also be back from a concussion suffered two weeks ago and Brittany Smart will be keen for a big game against her old club after she recorded a double-double (17 points, ten rebounds) in their first meeting with Melbourne in Round 2.

The Boomers got the better of them by 12 points that time but only led by one at three-quarter time and without Ezi Magbegor who has a broken bone in her hand, the home side may be vulnerable.

Saturday’s twilight match-up between the Lightning and the Rangers shapes as an integral one with both sides fighting to stay in touch with the top four.

Sitting at 2-3, the Lightning have only won of their past four games while Dandenong have come up empty in each of their past three outings and both sides were disappointing in Round 4 as they suffered 18+ point losses each.

For the first time, Steph Blicavs comes up against her old team and she should be able to aid with the scouting report while also adding 10.2 points and 2.6 assists per game.

The two-star imports will be the focal point as Nia Coffey leads the league in rebounding with 11.6 boards to go along with 15.6 points per game for Adelaide.

At the other end of the floor, Betnijah Laney is proving she is one of the league’s premier play-makers, averaging 5.8 assists per game as a forward to go along with 13.4 points and 7.6 rebounds.

Both players are barometers for their teams and the winner of that individual battle should ensure victory for their club.

This game will also be held after the Adelaide 36ers host the Sydney Kings, the second of five such double-header games for the Lightning this season.

Completing their Victorian road double, the Flames head up to face Bendigo on Sunday, three days after visiting Melbourne.

After a big win over the Boomers on Melbourne Cup Eve, the Spirit have announced themselves as legitimate finals contenders and they currently sit third on the ladder with a 4-2 record.

Louella Tomlinson and coach Simon Pritchard were both ill during the win over Melbourne but Nat Hurst took over with 25 points to help clinch a Player of the Week award with an average of 19.5 points and 7.5 rebounds while Nadeen Payne and Barbara Turner continue to play their roles to perfection.

The Sprit will be hopeful that the six-day break will be enough for coach Pritchard and Tomlinson to recuperate but playing Sydney Uni on the second game of a double-header might help their cause with a short turnaround.

Coming into Round 5, Belinda Snell sits just 15 points behind Jess Bibby in fourth place on the WNBL all-time leading scorers table and if she has not already passed the milestone on Thursday night, she is very likely to reach it on Sunday.

The battle in the paint between Bunton and Becca Tobin will be something else to watch on Sunday with Tobin emerging as one of the best signings of 2018/19 while Bunton has been able to assert herself under the rim in almost every game so far this season.

Round 5 may save the best until last as the Boomers travel to Townsville for the Grand Final re-match with the Fire also honouring Remembrance Day.

Last time the Boomers set foot in Townsville Stadium, they fell in Game 3 as the Fire clinched the 2017/18 Championship and that feeling will still be raw for several of the returning Boomers while for Cayla George, it will be a different emotion on Sunday.

She faces her old team as a key piece of Melbourne’s front court and could come up against Suzy Batkovic in a mouth-watering proposition.

Batkovic has not slowed down at all in her final WNBL season, collecting a double-double of 23 points and 11.6 rebounds and if she maintains those numbers, this will be the seventh season she has averaged a double-double.

However, Townsville are struggling with a 2-3 record and have not strung together consecutive victories in 2018/19.

Their front court has been solid but their back court will have a tough task containing Boomers point guard Lindsay Allen as well as Maddie Garrick and Steph Talbot who are lighting it up from long range.

If the Fire can repeat last season’s Grand Final performance and defeat Melbourne, they will be right back in the hunt for the top four but another loss will drop them off the pace and makes things a lot more difficult as we complete the first third of the season.