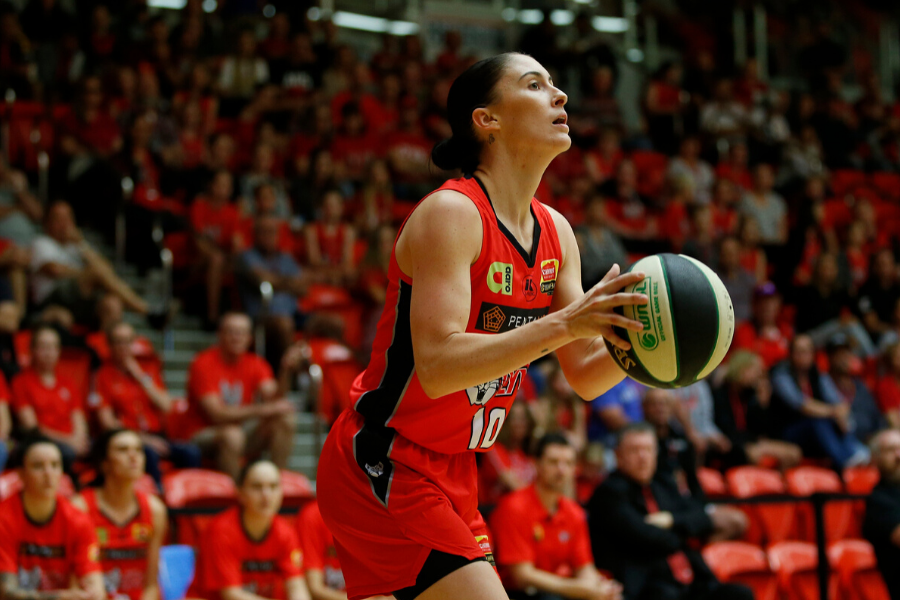 From 4 straight wins to 2 consecutive defeats, the Melbourne Boomers want to set another pattern in Round 6 of the Chemist Warehouse WNBL.

The Boomers lost their first game of #WNBL20 to the Southside Flyers on Melbourne Cup Eve then came up short against the UC Capitals last round. This weekend, they are on the road, to Adelaide then Bendigo, and keen to begin a new winning streak according to star guard Lindsay Allen.

“We’re not pushing the panic button or anything like that. We’re still confident with who we’ve got on the team, what we’re running and what our system is. It’s just tidying up a few things and I think once we get that squared up, we’ll be right to go,’’ she said.

“We’re very excited to get back to playing and get our national team members back into the fold. They might be a little bit out of it in terms of the travel and having those 3 games but it’s really up to the people here and our co-captain Maddie Garrick to get us back on to the same page.”

The Flames won 1 and lost 1 last round and will like their chances at home against a Lynx side which is looking to really kick start its season.

Consistency is the theme for Sydney – finding it within games and getting it from a wide-spread of players on the stat sheet.

The Lynx beat Sydney, 93-74, last start and embark on a defining stretch of their season in the lead-up to Christmas. The break will have aided Ariel Atkins, while Imani McGee-Stafford is out of the moon boot and eyeing a return.

Perth is being led superbly by its Co-Captains and play makers Katie Rae-Ebzery and Lauren Mansfield, while Marena Whittle and Nadeen Payne continue to show why Andy Stewart wanted to bring them out west.

A tantalising tussle between top-four sides brings excitement following the break in play and there’s plenty on the line under Friday night lights.

Adelaide famously ousted Melbourne out of last season’s semi-final series and are high on confidence after thumping Bendigo, 105-77, in Round 5.

The Lightning had 10 scorers led by gun import Brianna Turner (22 points) while Steph Talbot is enjoying a purple patch of form and primed for a big night against her former side.

Import Sophie Cunningham looks to have found her groove for Melbourne who will welcome valuable contributions from the likes of Ezi Magbegor and Maddie Garrick.

The Fire are sizing up a major scalp here and will draw some confidence from their opening-round clash with the Flyers.

Townsville was without Abby Bishop back in Round 1 at Dandenong Stadium and her form has been fantastic since averaging 20.2 points and 8.6 rebounds. A great match-up looms with Mercedes Russell who has played her role to perfection for Southside.

Jenna O’Hea and Leilani Mitchell hit the floor after returning from the Opals pre-Olympic qualification tournament in Malaysia and will be the drivers behind Southside returning to the winners list after their first-ever defeat.

Tracy York and the Spirit are hoping its third time lucky against the Boomers after suffering a pair of defeats in rounds 1 and 2.

After consecutive losses before the bye, a 2-0 weekend in Round 6 would be a big boost for Melbourne. It would say plenty about the character of this group, a road double is a tough task for a squad which had 6 players represent their countries at FIBA qualifiers.

These two have established a great little rivalry over the last year and a bit and a new chapter begins on Sunday in the nation’s capital and on Fox Sports.

The Caps have their mojo back after a successful trip to Melbourne in Round 5 netted big wins over Southside and Melbourne. Kia Nurse, Kelsey Griffin and Keely Froling are in great touch but the vintage form of Marianna Tolo and constant improvement of Olivia Epoupa has pleased coach Paul Gorris.

It could be a defining trip east for the Lynx who can breathe life into their campaign with success against the Flames then Capitals.

*All times listed are local.