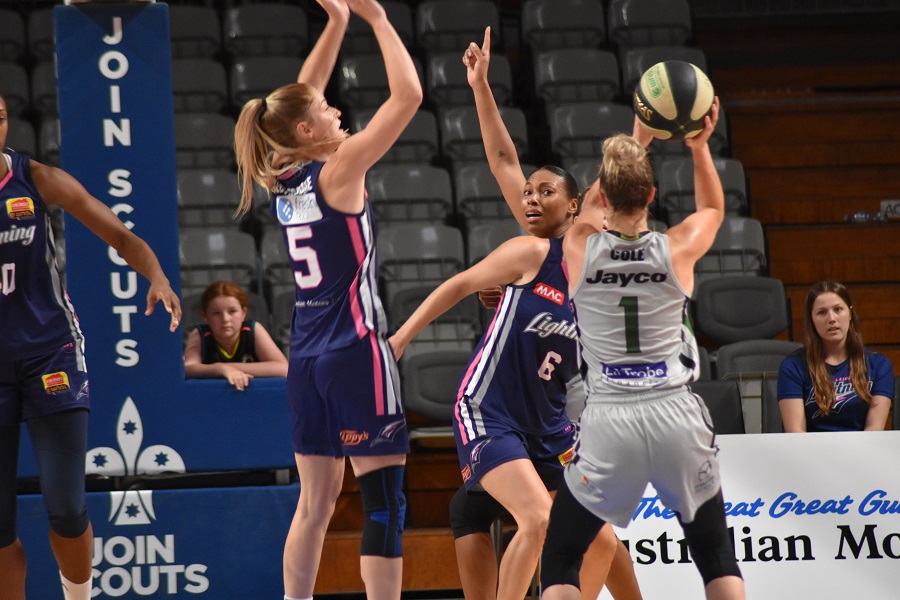 The Spirit will host OTIS Round this weekend which will see the home side and their fans wear pink in support of breast cancer retreats as they take on Townsville for this week’s broadcast game.

The Fire split their Round 6 road trip and with a 3-5 record, cannot afford too many more slip-ups if they want to threaten the current top four.

Bendigo currently occupy fourth place with a 6-3 record but also split their double-header last weekend with a surprise loss at home to Dandenong.

Their offence dried up in that clash, shooting just 32% from the field but they were also uncharacteristically poor defensively, surrendering 81 points which is 13 more than their season average.

That will give the Fire confidence but as usual, a lot of their hopes rely on Suzy Batkovic. She will go head-to-head with Becca Tobin on Saturday, one of the star imports of the season so far and while her rim protection will bother the Fire centre, Batkovic’s strength in the paint should still see her fill up the stat-sheet.

The Fire will need another concerted effort from their back court to deal with Nat Hurst who is the floor general for the Spirit and can hurt oppositions with her passing as well as her more-than-capable shooting.

Two of the WNBL’s leading teams are set to face off in the opening game of Round 7 after they have shared the spoils in their two previous meetings so far.

Facing off in Geelong in Round 2, the Caps dominated the first half and while the Boomers mounted a come-back behind the strong play of Ezi Magbegor, the visitors prevailed by seven points.

One week later, the Boomers travelled to Canberra and reversed the result with a six-point win as all five starters notched double-figures.

Achieving that impressive stat may not be as easy this weekend with Melbourne still expected to be without Magbegor but they will be hopeful that Steph Talbot can make her return from a minor leg injury.

She has been a key cog on both ends of the floor for Guy Molloy’s team, averaging 15 points per game while also featuring in the Defensive Player of the Year conversation.

Leading the league with 20.1 points per game, Kelsey Griffin will be a handful for Melbourne and could provide a fascinating match-up with Jenna O’Hea but at the other end of the floor, the Caps must be wary of the Boomers’ three-point shooting.

Putting up around 40 long-range attempts, the Boomers will live and die by the three but a win in this clash could move them into second spot on the ladder while the victor will also take the seasons series to add to the importance of this game.

The Rangers head to Gippsland to play at the Traralgon Sports Stadium against the visiting Lightning in a game that both sides will be desperate to capitalise on.

The gap between the top four and remaining sides is beginning to grow and for the loser of this clash, the margin will be even greater to overcome with the Rangers needing to bounce back from a 25-point thrashing just two weeks ago at the hands of Adelaide.

In that game, Nia Coffey’s 21 points led all five starters in double-figures and they shot 57% as a team. Coffey has been one of the league’s leading rebounders with ten per game and alongside Kayla Alexander who burst on to the scene last weekend with 16 points, 14 rebounds and three steals, they will bother Dandenong’s forward line-up.

One of the Rangers’ new recruits, Bec Cole, has enjoyed a break-out year with her new team. Putting up 17.3 points on 45% shooting, the quick and nimble guard will keep the Lightning on their toes during this week’s contest and was the only player to break away from their clutches when they last met.

After a poor start on the defensive end this season, Dandenong turned things around in Round 6 by holding Bendigo to 32% shooting and they must bring that same intensity to have any chance against the Lightning.

The ladder-leading Lynx will take on the Flames in Sydney for a Saturday twilight match-up. Alex Bunton is still set to be out for the winless Flames but veteran Belinda Snell will boost their offensive stocks after they ran out of steam against the Spirit last weekend.

The game will also mark Ladies Who Lay-Up Round with the Flames set to enjoy some added support at Brydens Stadium as they look to break through for a maiden victory.

Meanwhile, Perth will celebrate Lauren Mansfield’s 100th WNBL game and while she is playing a smaller role off the bench this season, she is still proving to be a handy addition to their second unit back court.

Former Flames Asia Taylor and Katie Ebzery have been key contributors in the Lynx’s strong start to the season and they proved deadly when these sides last met, combining for 35 points, 17 rebounds, eight assists and four steals in a 16-point victory.

After their win streak came to an end last weekend, Sydney Uni may have caught Perth at a bad time.

Having won five out of their last six games in a brutal stretch, the Boomers’ busy month continues Sunday as they host Adelaide.

Both sides will be playing their second game of a Round 7 double-header but the Boomers’ extended stretch of games will be evened somewhat by the fact the Lightning will have travelled down from a game in Gippsland the previous day against the Rangers.

Lindsay Allen has lifted herself to the forefront of MVP discussion over the last fortnight, having earned back-to-back Player of the Week nods and now the likes of Lauren Nicholson and Nicole Seekamp will be tasked with containing the electric point guard.

Fresh off being named in the WNBL Team of the Week following her best games of the season, Cayla George will come up against the likes of Colleen Planeta while O’Hea could follow up a battle against Griffin with a battle against Coffey.