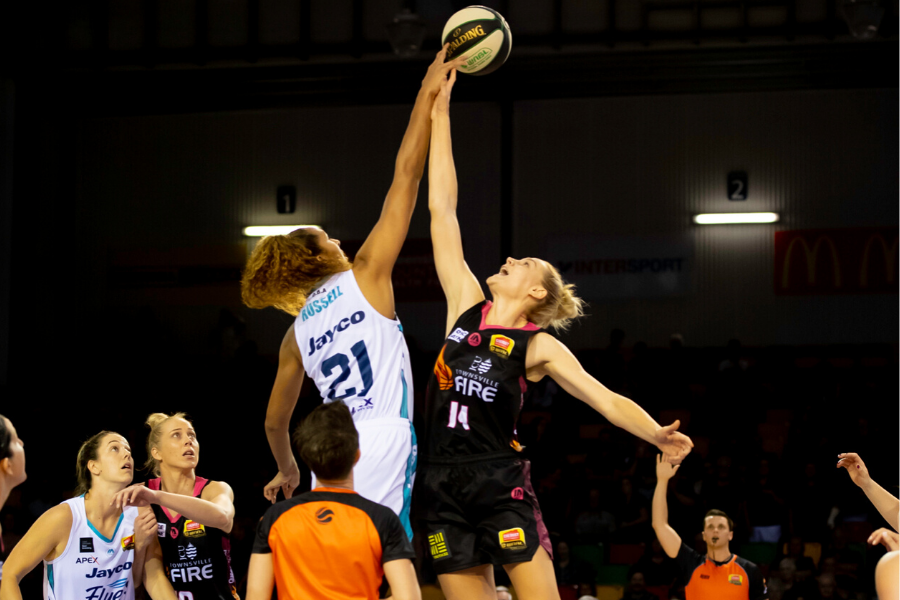 Still smarting from a hefty defeat to ladder-leader Southside Flyers, Townsville Fire are embracing one of the toughest road trips in the Chemist Warehouse WNBL.

The bottom-placed Fire, 1-6, are headed to Canberra to face the UC Capitals who are currently on a 15-game winning streak at home and it’s a challenge Townsville are welcoming according to star Abby Bishop.

“We’ve got confidence coming into this week. We played Canberra just over a month ago, we lost by 2 points and were right there. I know they’ve got better but so have we,’’ she said.

“I think it’s going to be a great game, I’m really looking forward to getting back on the court especially after that last loss.”

The Lynx are back home after a big road trip east in Round 6 which resulted in a win then a loss.

Import centre Imani McGee-Stafford is set to be quite literally a big in for a Perth side being led by in-form Co-Captains Katie-Rae Ebzery and Lauren Mansfield. Maddie Allen was restricted against the Caps last Sunday but has become a critical part of Perth’s system.

The Flyers won big in Townsville last round and are on the road again for another big weekend, relishing the challenge of Perth in Perth. Southside’s starters continue to deliver but Anneli Maley (7 boards against the Fire) is showing the important spark she provides off the bench.

The Spirit and the Flames have battled with inconsistency within games so far this season and both teams will be sizing this clash up in a bid for a desperately-needed victory.

Bendigo fell in a hole after leading Melbourne Boomers for a half last round and need to drastically improve the way they handle and shoot the ball against Sydney. The Spirit will be without Abi Wehrung who hasn’t trained this week after copping a blow late against Melbourne.

Becca Tobin v Colleen Planeta should make for an entertaining tussle. No Tahlia Tupea means another big night ahead for Ally Wilson who will have her work cut out for her in the form of Kelly Wilson, Tessa Lavey and Shyla Heal.

The Caps were engaged in an arm-wrestle with Perth last start before flexing their muscle in the last quarter with a 32-point term sending a powerful message to the league.

Canberra’s 4 straight wins is currently also the biggest winning streak in the league. Coach Paul Gorris is delighted with the input of Maddy Rocci and Gemma Potter which is complementing the contributions from his stars and starters.

The way Townsville responds this week will reveal plenty about the Fire group and the likes of Captain Micaela Cocks and Abby Bishop will be hellbent on restoring some pride and claiming a major upset in the nation’s capital.

The Fire need greater contributions from import duo Bridget Carleton and Julie Vanloo who can really test themselves in this fixture.

Lindsay Allen took the Boomers on her back and dragged them to a pair of victories over the Lightning then the Spirit last round and continues to stake her claim as one of the most exciting and damaging players in the competition.

With Tahlia Tupaea and Brittany Smart sidelined, Sydney will know the importance of nullifying Allen’s influence and team defence and a spread of contributors is key for the visiting Flames.

A year ago, Sydney, with just 1 to its name, came to Melbourne to face the in-form Boomers and pulled off one of the biggest upsets of the season. Coach Katrina Hibbert, on her first WNBL road trip to her home town since taking the reins, will be quietly confident history can repeat itself.

The Lightning are bolstered by 2 big inclusions for its Round 7 clash, import forward Kathryn Westbeld makes her debut, after replacing Crystal Langhorne, while four-time Olympian Laura Hodges returns from a calf niggle for her 13th WNBL season.

Westbeld played with Brianna Turner at Notre Dame and the pair are thrilled to be reunited in the WNBL and keen to achieve some success.

Adelaide remain in fourth position, despite last round’s defeat to Melbourne, but have Perth hot on their heels just 1 win behind, at the start of the round, so a home-victory here is much-needed.

Turner notched another double-double in Round 6 before she fouled out in the last quarter, remaining on court and continuing her strong form will be crucial against the pace setting Flyers who have players riding a wave of form and confidence in every spot.

*All times listed are local.