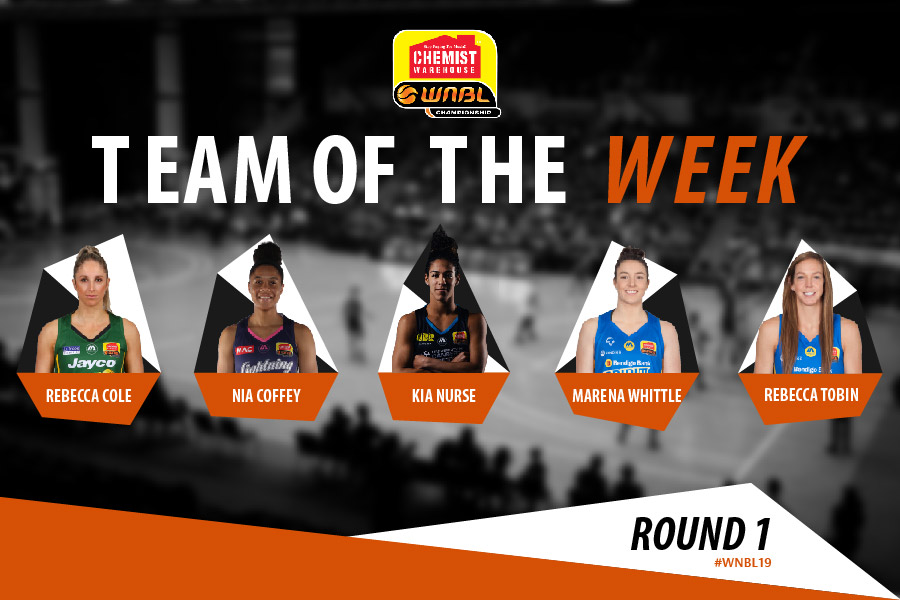 ROUND ONE TEAM OF THE WEEK

It can sometimes take imports a couple of weeks to settle into life in a new league but a couple of new additions had no such trouble in Round 1 with three Americans earning places in the Team of the Week.

Following her Player of the Week award, Kia Nurse of the University of Canberra Capitals also makes it to the Team of the Week after scoring 26 points and hitting 4-8 from three-point range in a big win.

Nia Coffey tallied a double-double of 19 points and 15 rebounds as she showcased her athleticism and strength for the MAC Adelaide Lightning who also picked up a win in Round 1.

Bec Cole was crucial in the Jayco Dandenong Rangers’ upset victory over the reigning Champions, finishing with 18 points and seven rebounds. She pulled down an important defensive rebound and then nailed two free-throws in the final ten seconds to help secure a five-point win for Dandenong.

In the other major upset of the weekend, Bendigo Bank Spirit have had two players earn their way into Team of the Week after they got the better of the Deakin Melbourne Boomers.

Marena Whittle (21 points, three assists and four steals) was outstanding, scoring ten points in the second quarter as the Spirit went on a 29-5 run and she then had an answer for every run that Melbourne threw at Bendigo in the second half.

Controlling proceedings at both ends of the floor, Becca Tobin takes out the final spot. She recorded 15 points, nine boards, two assists, five steals and three blocks in a complete performance on debut while also helping to negate the influence of Opals Ezi Magbegor and Cayla George.