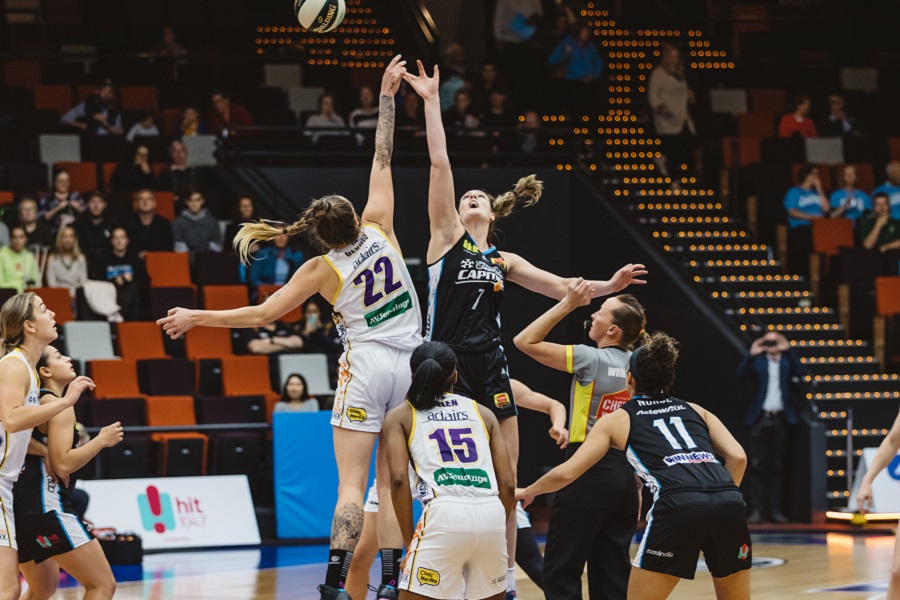 With only three weeks remaining in the Chemist Warehouse WNBL regular season, take a look into the race for the top four.

The UC Capitals secured a finals berth last weekend for the first time since 2011, winning their  two games by a combined margin of 72 points.

They have now won five games in a row by an average margin of 31.4 points and their red-hot form places them in a strong position to finish atop the standings with all four of their remaining games coming against teams outside a finals position.

Currently the in-form team of the league, Paul Goriss’ side need to maintain that momentum as they chase the franchise’s first Championship since 2010.

The Boomers also secured their 2018/19 finals berth last weekend after a dramatic overtime win against the Spirit but a 1-2 record against the Caps during the regular season means they currently sit second.

After losing the Grand-Final series 2-1 last season to the Fire without home court advantage, top spot is sure to be a coveted position for Guy Molloy and his team.

However, the Boomers face some tough opposition in their run-home, which includes two games against Perth. The second game against the Lynx is the first of a Round 14 double-header, in which they also travel to Adelaide in a tough and ladder-defining Doomsday Double. The Lynx are in need of one more win to secure a finals spot. While they own the season series against Bendigo, Dandenong and Townsville, the possibility of three, four or five-way ties still means they are not quite cemented in the post-season yet.

After a dominant first-half of the season, Perth have lost four of their last six games to slip to third on the ladder and things do not get any easier in their run home.

They face two games against the Boomers and another against the in-form Lightning with Andy Stewart’s chargers needing to re-find their their early season form to prime themselves for a finals run.

Sitting three games ahead of the Fire, Rangers and Spirit, Adelaide are well poised to make the finals for the first time since 2013 but need two more wins to make it official.

They will be confident in achieving that feat, having won seven of their past eight and if they continue that form, they can still jump ahead of Perth and into third spot on the standings.

Owning the season series against the Lynx will help in that regard as well while a Round 15 clash against Perth at the Bendat Basketball Centre in the last game of the regular season could decide which team finishes third and fourth. With three rounds remaining, the Fire’s season hangs by a thread. They need to win at least three games to make their way into the top-four as they do own the tie-breaker against Adelaide but in all likelihood, they cannot afford another loss.

Having won three of the past four Championships, reaching five of the last six Grand Finals and not missing the playoffs since 2010/11, this is an unnatural position for the Fire to be in.

The Rangers own the same record as Townsville but without the season series against Adelaide or Perth, the Rangers cannot afford to lose another game and a match-up against the Fire this weekend will be a real test.

Dandenong also need Adelaide to lose all four of their remaining contests which seems highly unlikely but Dandenong do face three teams outside the top four in their run home to give them some hope.

A Round 15 match-up against the Boomers will be a battle, having lost to Melbourne by an average of 25 points in two previous meetings this season. Currently sitting second-last in the standings, the Spirit need to keep winning like Townsville and Dandenong while a win over Adelaide in Round 14 could really spark them as it will give Bendigo the season series.

The Spirit need to win at least three of their remaining four games to make the finals and with every upcoming clash against a top-four team, their backs are against the wall.

The only team in the WNBL who are out of the finals race, the Flames are without any hope of moving up the standings.

With their lowest ever win total of five wins coming in 1983 when they were known as the Bankstown Bruins, Sydney Uni will need to win three of their last four in order to avoid setting a new record low.

A home game against the sixth-placed Rangers shapes as a winnable game but two clashes against top four oppositions will make that a tough ask for the Flames as they aim to farewell Belinda Snell in style.