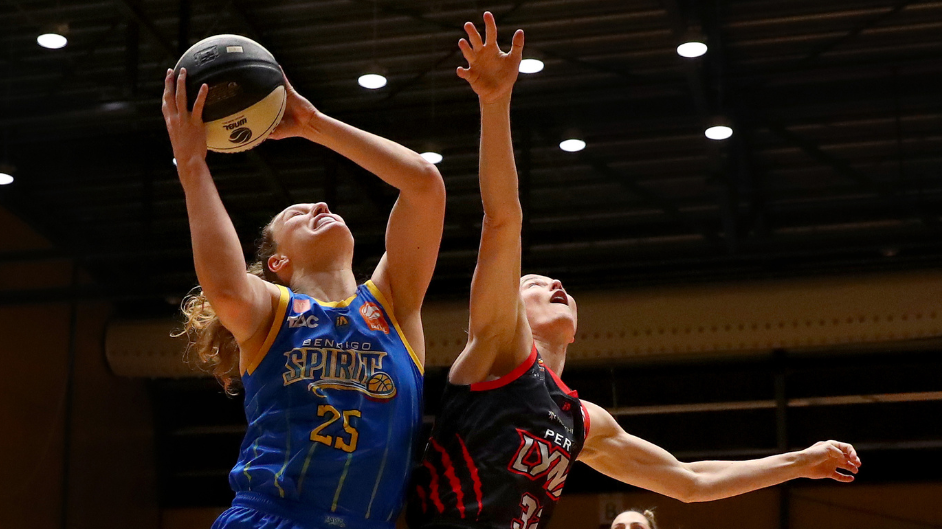 Round 1 of the Cygnett WNBL has tipped off and as predicted the players were on fire. The Spirit won both their matches, with the Boomers, Fire and Flyers also getting the W.

Despite the broadcast’s technical issues that will be rectified ahead of Round 2, the quality of basketball was simply superb with teams hitting triple figures, players shooting the lights out, and breakout performances.

We appreciate the feedback from fans over the weekend and are working hard to deliver improved WNBL coverage for the remainder of the season.

A TONNE OF HIGHLIGHTS

It was a shooting display like we haven’t seen in a long time with three of the five games in the round tipping 100 points. Could the new Spalding WNBL ball be a contributing factor? Shooting percentages were off the charts, the Boomers 104 at 58%, the Spirit 105 at 58% and the Fire 104 at 60%. The Flyers didn’t quite manage to get the triples, finishing one short on 99.

The Fire showed they’ve got some serious scoring firepower on their roster with five players hitting double figures in their win over the Capitals. But it was superstar Lauren Nicholson who stole the show with 35-points, at an incredible 72% from the field.

Joining Nicholson in the 30-club were Sami Whitcomb who put on 30 for the Lynx in their loss to the Boomers and Tiffany Mitchell from the Boomers with 32 (her highest score in the WNBL to-date).

Despite falling to Southside, it was a breakout debut for Adelaide’s 18-year-old Isobel (Izzy) Borlase, who finished her game with 25 points at a whopping 83%. Fresh out of the Centre of Excellence she is definitely one to watch.

The Caps played two games in the Round, and while not getting the win in either, 19-year-old Shaneice Swain was a real spark, showcasing her speed and athleticism and contributing to the scoreboard with 15 and 7 respectively. Unfortunately, rising star Gemma Potter will be out for the season after suffering another ACL injury, we wish her all the best for her recovery.

Perth’s Chloe Bibby, who returns to the WNBL this season after college in the US, put on a display in the Lynx match against Bendigo, finishing with 28 points at 63%, and making some incredible shots in the process.

Fire point-guard Steph Reid certainly dished it up to the Caps, with 14-assists for the game (to go along with a handy 13 points, notching herself a double-double).

It was an all-round outstanding performance for Boomers Tiffany Mitchell, who had 9 assists and 4 steals alongside a game-high 32 points.

With the return of the GOAT, the Flyers had the ultimate luxury of bringing the trio of Abby Bishop (a former league MVP), Carley Ernst (who hit 4-5 from deep and finished with 12 points) and captain Aimie Rocci off the bench – talk about going deep!

Round 2 of the Cygnett WNBL tips off this Wednesday with cross-town rivals the Southside Flyers taking on the Deakin Melbourne Boomers. If you’re in Melbourne, grab your tickets HERE. Otherwise tune in on ESPN at 6.30pm (AEDT) for Wednesday night WNBL.