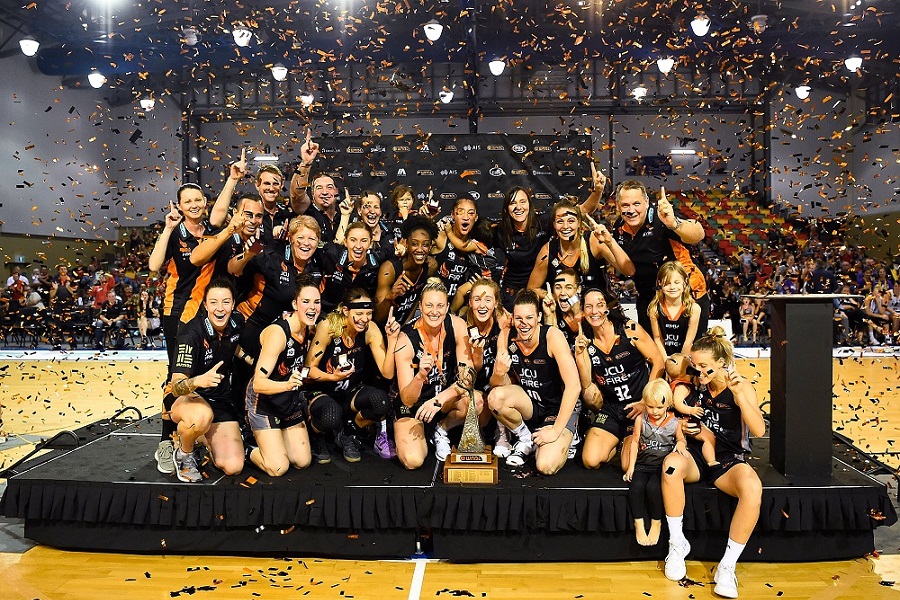 The JCU Townsville Fire have earned their third Championship in four years following a 70-57 Game 3 victory over the Deakin Melbourne Boomers in the 2017/18 Grand Final series.

As was the case throughout the campaign, the Fire were led by Suzy Batkovic, who capped one of the greatest individual WNBL seasons of all time with a game-winning performance.

Having already claimed the season MVP, Batkovic was not going to be denied the 2017/18 Championship as she tallied a double-double before half-time while going on to record 28 points on 11-23 shooting, 13 rebounds and three assists.

That performance guided Townsville to the trophy and their captain then won a richly deserved Rachael Sporn Grand Final MVP award for her efforts through all three games.

Once again, the Boomers struggled to find their shooting range as they hit just 27% from the field and 4-34 (11%) from distance while scoring 18 points below their season average.

Brittany Smart (14 points, eight rebounds, three steals), who was the stand-out for Melbourne in Game 3, did get them off to a strong start though, scoring five of the Boomers’ first seven points.

However, Kelly Wilson (nine points, five rebounds, three assists in her 350th game) and Batkovic responded with consecutive three-point plays to spark an 8-0 run for Townsville and from there, they were never headed.

Batkovic had nine points and six rebounds by quarter-time and she then knocked down the first three baskets of the second term to help Townsville to another 11-0 run which put them firmly in control.

The momentum for the home side forced a time-out from Guy Molloy and out of the break, Melbourne finally were able to string a few possessions together as they attacked the Fire’s zone defence with some up-tempo ball movement.

Batkovic had the answers again though, collecting her double-double midway through the term and ensuring Townsville had an eight-point edge at half-time.

Melbourne’s second halves had been strong through the series and it looked like deja vu momentarily as they started the third term with an 8-0 run, sparked again by Smart while Liz Cambage (18 points, nine boards, two blocks) was integral.

A timely three from Mia Murray (six points, five rebounds) quelled the comeback and then Kalani Purcell (four points, eight boards, one block) fouled Mikhaela Donnelly which sent her to the bench with four personals.

From there, the Fire scored the last seven of the third quarter including a three from Batkovic and when Laurin Mincy (11 points) chimed in with five in a row to start the fourth quarter, Townsville were home.

Claiming their third Championship in four years, Townsville have equaled the efforts of the Adelaide Lightning from the 1990’s and UC Capitals of the early and mid-2000’s as the only club to achieve the feat with Batkovic, Murray, Cayla George and Micaela Cocks a part of all three titles.