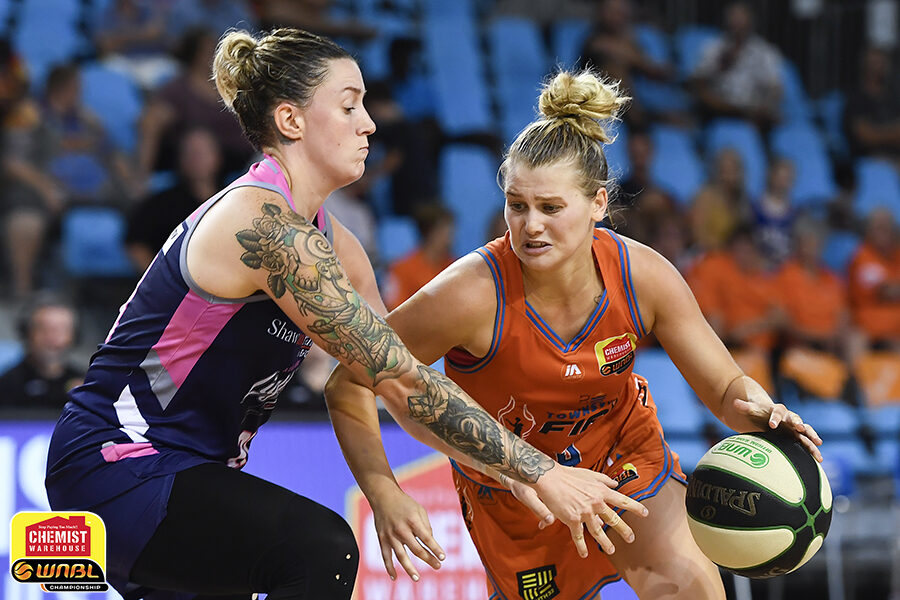 The JCU Townsville Fire wanted a hot start and that’s exactly what they produced on the way to a big win over the Adelaide Lightning, 95-66, in their penultimate game of the Chemist Warehouse WNBL season.

Townsville guard Steph Reid spoke about the importance of a strong first quarter in the lead-up to the Friday night fixture in Cairns and her team delivered with 28-11 opening term.

Centre Megan McKay, who scored 19 points, grabbed 7 boards and had 2 assists, was pleased to play a key role in Townsville’s 8th win of the season.

“The girls were able to find me tonight and credit to them. I think tonight my shots dropped, I wasn’t in foul trouble and everything just worked well,’’ she said.

“It was a great win. We knew we had to come out tonight and really be the aggressors and I think we did that beautifully.

“I don’t think you’ve seen it (our best yet). There’s been little glimpses of it but we’ve still got so much more to show.”

Fire star Lauren Nicholson topped the stat sheet with 21 points plus 4 rebounds and 4 assists in a dominant display, Reid was brilliant off the bench with 17 points, 3 assists and 2 rebounds in just under 20 minutes court time while Courtney Woods (12 points) and Shyla Heal (10 points, 7 rebounds, 2 assists) also made an impact.

Whittle said her team paid the price for a sluggish start.

“We weren’t talking as much on defence and we really let Townsville dictate the speed and the pace and we couldn’t stand up to them in the first half,’’ she said.

“I think every game this season we’ve had opportunities to grow and there’s been a lot to take away from every game and this game was no different.

“The aim now is to finish the season off with 40 minutes on the board and play as hard as we can from the start.”

On Sunday, the final day of the regular season, the Fire face the Deakin Melbourne Boomers in a potential finals preview while the Lightning look to finish their campaign on a winning note when they play the Brydens Sydney Uni Flames, with both games will be played at Townsville Stadium.

Megan Hustwaite is a freelance contributor for wnbl.basketball