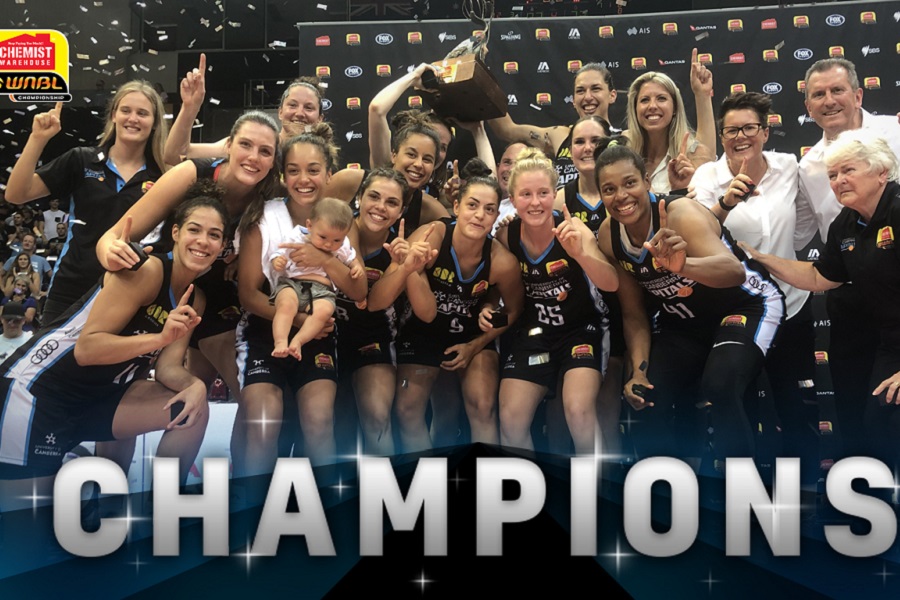 The University of Canberra Capitals starting five, so impressive through the second half of the season, has led their franchise to an eighth title, claiming the 2018/19 Chemist Warehouse WNBL Championship.

Kelsey Griffin led the charge with a double-double of 29 points, 15 rebounds, four assists and two blocks, the guard duo of Leilani Mitchell and Kelly Wilson combined for 35 points and ten assists while Marianna Tolo added 14 points and Kia Nurse had 12 points and three assists.

Managing to drown out the crowd of 4,820, the Lightning started well as they utilised Kayla Alexander (11 points, seven rebounds) under the rim to gain an early buffer with the centre scoring nine points in the first six minutes.

The Caps quickly reeled in the deficit though, thanks to Tolo and Wilson who scored their first 13 points before Griffin drilled consecutive three-pointers.

That sparked her side to hit 5-6 from beyond the arc in the opening term but an impressive performance from Collen Planeta off the bench and an Aimie Clydesdale buzzer-beater brought the margin back to a point at the first change.

The home side continued to rain three’s in the second, moving to 7-10 from beyond the arc at one stage but Adelaide managed to counter each blow with points in transition, even with Nia Coffey stuck on the bench with three fouls.

The dam wall finally burst in the third quarter though, as the Caps exemplified the old adage of the ‘Championship quarter’.

Griffin had the first five points of the second half and the Caps blew the game open by hitting five of their first seven shots, including three from distance.

Clydesdale (14 points) again did her best to stem the bleeding, reaching double-figures alongside Planeta (15 points, eight rebounds) but Mitchell finished them off, scoring seven straight points to make it a 12-point game at three-quarter time- a margin that Adelaide could not come back from.

The Championship marks an incredible run at the end of the season for the UC Capitals, who won 13 of their last 14 games, with their only defeat coming by a point in Game 2.

It is the second Championship for Mitchell, the third for Tolo (all with the Caps), the fourth for Wilson and her second in a row after claiming the title with Townsville last season while Griffin claimed her third Championship and her third Rachael Sporn Grand Final MVP.

At the conclusion of each game during the 2018/19 Grand Final series, three judges gave a 3-2-1 vote to their MVP and the overall winner was crowned the Rachael Sporn Grand Final MVP.