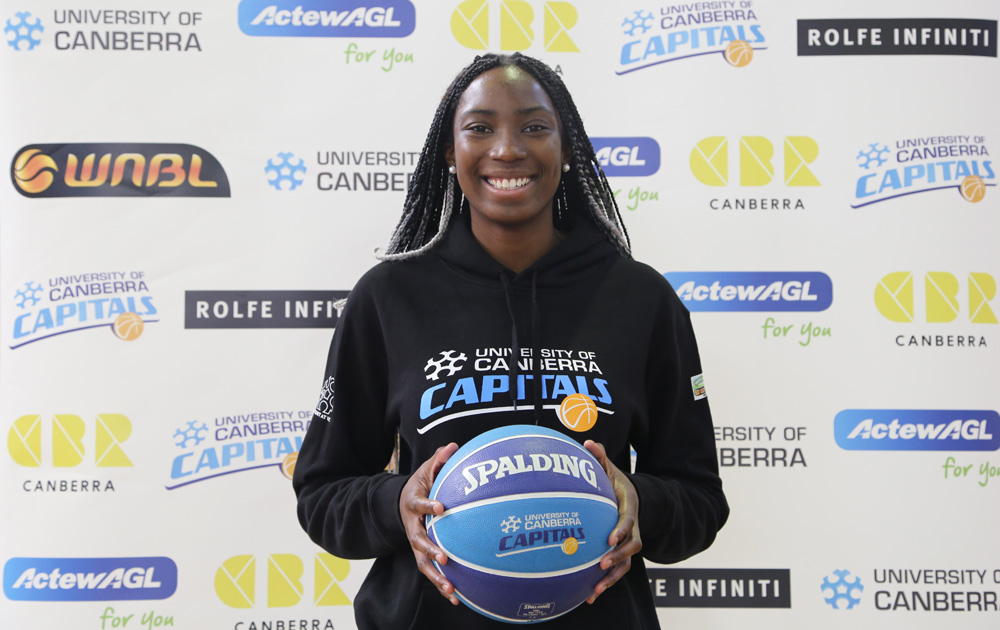 Rising star Eziyoda ÔEziÕ Magbegor will juggle school and elite basketball after signing a one-year deal with the University of Canberra Capitals.

The 17-year-old will join the club for the 2017/18 WNBL season while she completes Year 12 at UC Senior Secondary College Lake Ginninderra.

The 194cm centre is currently playing for Basketball AustraliaÕs Centre of Excellence (COE) in the South East Australian Basketball League (SEABL) alongside new signing Maddison Rocci, and is averaging 13 points and nine rebounds a game.

ÒIÕm excited to sign with the UC Capitals and IÕm looking forward to playing against and learning from some of the best players in the league,Ó she said.

ÒLauren Scherf is someone I look up to, who can play both outside on the perimeter as a shooter and inside the paint, so it will be good to learn from her.

ÒGetting that exposure in the WNBL and having [head coach] Paul Goriss as coach is a great opportunity for me to improve my game.Ó

At 15, Magbegor was the youngest member of the Australian Gems team to win a bronze medal at the FIBA under-19 World Championships in 2015.

She was part of the Australian Sapphires team that won gold at last yearÕs FIBA under-17 World Championships. She starred for her country and was named the tournamentÕs MVP as well as in the All-Star 5.

She will be looking to add to her haul when she joins the Gems to contest the FIBA under-19 World Championships in Italy later this month.

Head coach Paul Goriss said he was looking forward to working with Magbegor again after coaching her at the COE and in the junior national program.

ÒEzi is arguably one of the best players in her age group in the world,Ó he said. ÒShe can run the floor very well; she can rebound, block and change shots. She has exceptional athletic talent.Ó

The UC Capitals will fully support Magbegor with her studies while she makes the transition to senior womenÕs basketball.

ÒWe have great facilities available to us right here in the nationÕs capital and excellent support staff. Our players can study a University of Canberra degree while playing elite level basketball without having to travel overseas.Ó

ÒWe are giving Ezi the opportunity to come and play in the WNBL and get some experience which she needs to be a future Opal. We are delighted to welcome her to the UC Capitals family.Ó