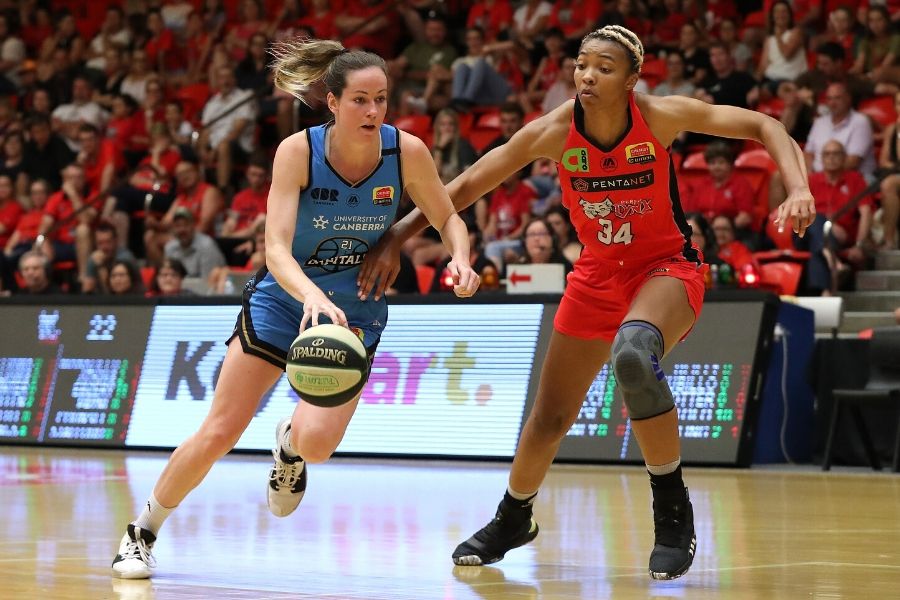 Defending champions the UC Capitals reminded the competition that they remain a WNBL force to be reckoned with after an impressive 76-59 win against the Perth Lynx at Bendat Basketball Centre on Sunday.

The Lynx had found their best form of the season pre-Christmas, with a home win over the Melbourne Boomers and a road victory against the Townsville Fire, but coming up against a hungry Capitals was a different story.

Meanwhile, Canberra came out determined to respond after recent losses against the likes of the Southside Flyers and Adelaide Lightning.

They would blow the game open in the second quarter and then despite the best efforts of the Lynx to mount a second half fightback, the Capitals had all the answers.

It was an impressive Canberra performance, highlighted by a terrific 23 points, 7 rebounds and 5 assists from Kia Nurse, who also went 5/12 from deep.

Marianna Tolo was tough to stop inside on her way to 21 points, 10 rebounds and 4 blocks, while Keely Froling added 14 points and 11 boards. Point guard Olivia Epoupa also was a strong contributor with 10 points, 14 rebounds and 7 assists.

The Lynx were led by Katie Ebzery with 25 points and 4 rebounds while Ariel Atkins finished with 8 points.  Imani McGee-Stafford had 8 to go with 6 rebounds, but foul trouble kept her to 18 minutes.

It was a hot opening to the game: Kia Nurse and Lauren Mansfield hit early 3s for their respective teams and little separated the Capitals and Lynx through that first term, with scores tied at 18-18 by quarter-time.

But the Capitals began to put their foot down to start the second period and by the time Maddison Rocci knocked down a three, their lead was nine after a 13-4 run. That grew to 12 when Nurse also connected from downtown and then 14 when Olivia Epoupa got to the rack and finished.

The lead grew to 17 when Keely Froling also hit from deep just before half-time; the Capitals went into the break in control at 44-29.

Perth got the deficit back under double-figures early in the third term and the margin was just 6 with Katie Ebzery nailing a 3. But Canberra continued to have the answers and still led by 12 heading into the fourth.

The Lynx refused to give it up but every time they looked like getting close enough to strike, the Capitals would hit a big shot, including a dagger three from Epoupa midway through the last quarter.

Rocci hit another soon after to make the lead 15 and from there, the Caps cruised to the 17-point win to move back into second spot ahead of the Boomers.

Capitals coach Paul Goriss was happy with his side, especially with their response to a disappointing loss on Friday.

“We were really disappointed with our third quarter against Adelaide and knew coming in here that we were confident of beating Perth here in Perth, but knew it was going to be a challenge. I’m definitely happy with the way the girls responded,” Goriss said.

“At half-time we spoke about Perth being a tough team and we knew playing at home they’d make their runs, and we withstood a number of runs they tried to throw at us. Our composure and how we executed during those runs was really a standout for me.”

“We’ve… got to look at what sort of shots we’re taking. We are taking just as many as them but is what we’re running working? And are we executing what we’re supposed to be executing? Those are the questions we really have to answer,” Stewart said.

“We have to analyse if they were good shots for us.”

The Capitals next head to Bendigo to play the Spirit on Friday night while the Lynx host the league-leading Southside Flyers the same evening.