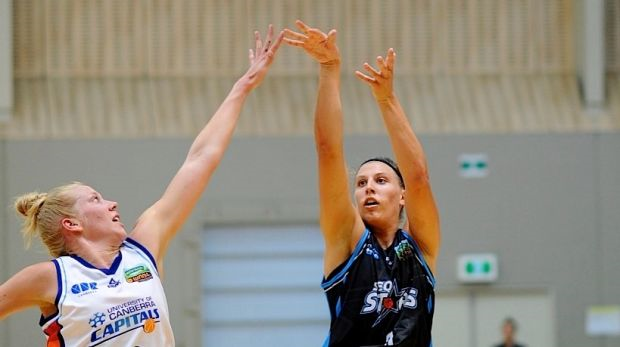 The University of Canberra Capitals have lured Jordan Hooper back to the WNBL with the American forward joining the club for the 2017/18 season.

The 25-year-old has signed a one-year contract with the UC Capitals. She played for the South East Queensland Stars in the 2015/16 WNBL season alongside Rachel Jarry, where she averaged 18.5 points and eight rebounds a game.

Hooper, who is currently playing for WNBA team Connecticut Sun, said the opportunity to return to the WNBL and play under UC Capitals head coach Paul Goriss was too good to refuse.

ÒWhat drew me to the UC Capitals and the WNBL again was Paul,Ó Hooper said.

ÒThe WNBL reminds me a lot of the WNBA. The level of talent and athletic ability is incredible. Australian basketball players are some of the best well rounded athletes IÕve seen, so IÕm very happy to be part of the WNBL again.Ó

Goriss said he was pleased to welcome Hooper to Canberra after trying to sign her last season.

ÒJordan is a relentless defender and a tough competitor who fits our style extremely well,Ó Goriss said.

ÒShe is hard-working and can shoot the ball extremely well from the three-point range.

ÒShe has a unique skill set and thrives on taking and making big shots. IÕm very excited to have her line up for the UC Capitals in 2017/18.Ó

Hooper grew up on a ranch and played college basketball for the Nebraska Cornhuskers. She was named WomenÕs Basketball Coaches Association (WBCA) First-Team All-American and a Big Ten Player of the Year in 2014.

Hooper scored 2,357 points and collected 1,100 rebounds during a decorated college career. She was also part of the USA Basketball WomenÕs World University Games team that won gold in Kazan, Russia in 2013.

Hooper played two seasons with the Tulsa Shock after the club picked her up in the 2014 WNBA draft. She has also played in Turkey with Besiktas JK and Istanbul Universitesi SK.