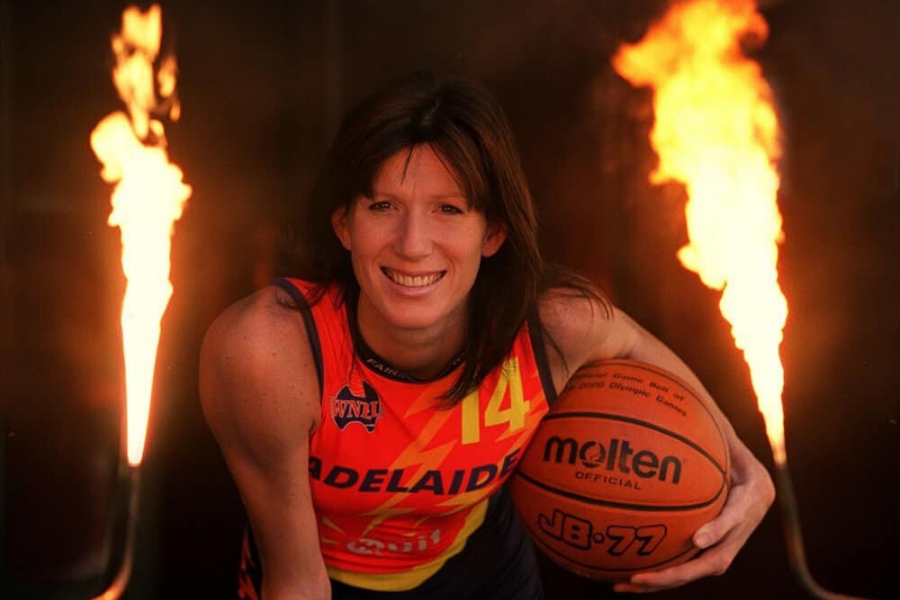 To celebrate the 40th season anniversary of the Chemist Warehouse WNBL, Megan Hustwaite catches up with some of the greats of the game in a series of interviews to discuss their time in the league.

We begin with one of the biggest and best athletes the WNBL has ever seen.

Rachael Sporn, the tall, skinny girl from Murrayville in country Victoria, achieved it all during a dazzling 377 game WNBL career.

Her lengthy list of achievements features 5 championships, 2 MVP awards, 7 all-star 5 selections to name a few. Her impact on the biggest stage was so profound the WNBL would later honour her by awarding the best player in the Grand Final with the Rachael Sporn medal.

It was some ride for the towering teen who made her WNBL debut at a time when South Australia was a powerhouse 3-club state.

“My first ever time on a plane was flying to Melbourne-Tassie to play Hobart Islanders,’’ she recalls.

“It was a whole new world and I was pinching myself it was even happening.

“The great Ted Powell taught me my jump shot in between Uni classes. I joked with Ted, I had no left hand, I was a head turner in D and I didn’t have a jump shot, he had a bit of work to do!

“I relied on my natural athleticism that thank God Mum and Dad gave me, wanting to be better, loving the game so much and the opportunities it was giving me. It was a pretty amazing time and it presented so many new experiences from me, going from Murrayville with a population of 300 people to playing in the WNBL and travelling the country.

“This amazing game just kept giving me amazing experiences and euphoric moments. It can give you low points but for me the highs outnumbered the lows so easily.”

Longevity was a big factor in Sporn racking up almost 400 national league games. The lure of playing in a world-class league was huge, so too the desire to stay at home.

“I missed a whole season after my knee reconstruction that I suffered playing in the WNBA in 1999 which was horrible but up until that point I’d only missed 1 game in 14 years,’’ she recalls.

“Without question. I was lucky enough to win the first with North Adelaide in ‘90 and had an amazing, experienced group around me and that was pretty incredible to get my first,’’ she says.

“Jan Stirling was ahead of her time in having such a professional system in place for us. Training was very hard, but bringing in nutrition, she was all over our weight and cross training. She was also able to recruit people who were a good fit.

“In 1994 we had one of the great imports of the time, Trina Roberts, because not many imports were playing in Australia at the time and she was integral to our success, such a tough player.

“That year we won in double overtime against Melbourne Tigers. I’ll never forget that, I can still remember jumping up and down celebrating because it was exhausting but so exhilarating.

“Kristi Harrower came to the team in 1995 for 1 year and she was a pretty good recruit from over the border. We won another championship and going for the threepeat was incredibly special and that happened away, over Sydney in ’96. We were the hunted and Jan had to keep changing things up to take us to another level.

“In ’97 we lost at home, I’ll never forget that, it was devastating. That was a real wake up call for us then ’98 was around the time we changed from a winter to summer league and it showed us how hard it was to win because we (Adelaide Lightning) didn’t win the next one until 10 years later.”

“It coincided with our success at Lightning and we had an incredible win-loss ratio which definitely helps when you’re polling votes,’’ she explains.

“1996 was such an amazing year because we’d just won bronze with the Opals in Atlanta so to come back and win the championship and MVP, it was like oh 1996 was a pretty good year!

“I certainly did appreciate totally winning those MVP awards because the talent I admired at the time in Australia was incredible. It was extremely special.”

Sporn says playing her role for her team on Grand Final day was satisfying. Presenting the medal, named after her, to stars of the WNBL in recent years has been an absolute joy.

“You want to play your absolute best on Grand Final Day, there’s pressure, there’s nerves and so many emotions so when you can put it all together and contribute like that it does feel amazing. The euphoria of winning it together as a team drives you too,’’ she says.

“Kelsey Griffin’s won 3 (GF MVPs) now, Leilani Mitchell’s won it, Suzy Batkovic. Watching them, I’m in awe of what they’re achieving and with those types of players it’s consistency of performance and I love what it stands for. Now it’s over a series, 2 or 3 games, and I like that too so you’re going to get the consistency and the player who deserves it.”

So, what does Sporn love most about the WNBL? The people. Teammates, opponents, the lifelong friendships and connections.

“Meeting the fans. It was in the beautiful days where people would write you letters and I developed beautiful friendships with people who wrote to me and I’d organise to meet them after a game,’’ she says.

“The elderly people seemed to like me and I had a connection with them and that for me was the most beautiful thing, the fans. I just loved that.

“They’d write to you and it was heartwarming to have people that didn’t know you but from watching you on court had an assessment of who you might be. I’ve kept all the letters, I’ve got a big trunk at home on the farm and when I have more time I’ll read through them all and will have the most amazing memories.”

Today, the triple Olympian lives in Adelaide with husband Maurie Ranger and children Teja, 17, and Kade, 13.

She is an Athlete Education Presenter for ASADA, appears on Fox Sports’ WNBL coverage and also heads up Adelaide Lightning’s Rachael Sporn Academy.