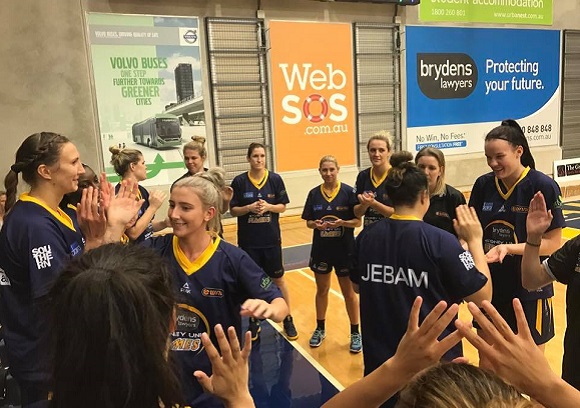 Brydens Sydney University Flames have taken a 1-0 lead in the best-of-three 2016/17 Grand Final series, edging out a gallant Jayco Dandenong Rangers side at home on Saturday night.

The Flames used a 22-14 final quarter to finally shake off the Rangers who showed they are up for the fight in this Grand Final series despite their underdog status. Dandenong led by as much as five points nearing half-time in a frenetic and impressive start (especially offensively) from both sides. Sydney Uni quickly wrestled back the momentum out of the main break but only two points separated the teams with just over two minutes to go. From there, Leilani Mitchell (15 points, six rebounds, three steals) finally broke free of the Amelia Todhunter (four points, six assists, two steals) shackles, hitting a jumper and a three-pointer that, despite being quickly answered by Sara Blicavs (a game-high 25 points), ensured the Flames had a big enough gap to secure the victory.

The home side shot an incredible 59% from the field with four starters hitting double-figures in scoring. Jennifer Hamson and Asia Taylor added 15 points each alongside MitchellÕs tally while Alex Wilson paced the team with 22 points, six boards and five assists. Lauren Nicholson and Tahlia Tupaea both added big minutes off the bench, combining for 17 points and helping to counter 25 combined points from DandenongÕs role players in Jacinta Kennedy and Natalie Novosel.

The series now switches to the RangersÕ home floor next Friday night before Game 3, if necessary, returns to Sydney Uni on Sunday.

Cheryl Chambers, Flames coach:ÊÒYou always want great games but do they have to be that close? The first half we forget to play defence but they found that in the second fortunately. IÕm just so pleased we go to Dandenong with that win.Ó

Sara Blicavs, Rangers:Ê“We made some silly errors on defence and a smart team like Sydney will punish you those errors. But the best thing about a three-game series is we get another crack at them and it will be at home so we will get a feeling in our stadium like they had tonight.”

Roy Ward gave his take on Game 1 for The Age: http://www.theage.com.au/sport/basketball/wnbl-grand-final-sydney-flames-beat-dandenong-rangers-in-game-one-20170310-guvwt1.html

Amanda Lulham reported on the contest for The Daily Telegraph: http://www.dailytelegraph.com.au/sport/swoop/flames-one-win-away-from-droughtbreaking-wnbl-title-after-downing-dandenong-in-game-one/news-story/ee7c120a9783b4eafbd9150f32fe80d0

Jenna OÕHea will return to the WNBL next season after the Melbourne Boomers announced her as their second signing: http://wnbl.basketball/jenna-ohea-bound-boomer/