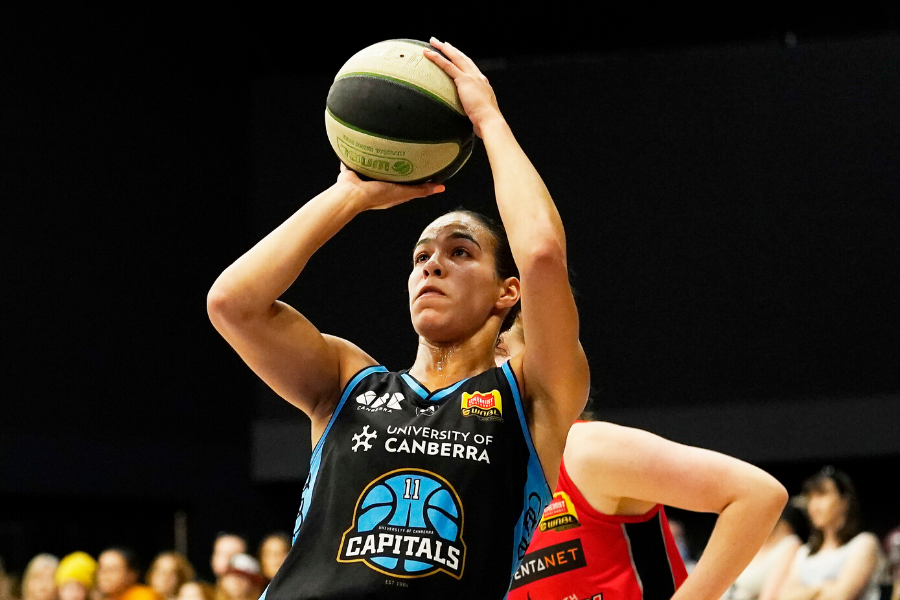 The 40th season anniversary of the Chemist Warehouse WNBL has delivered an incredible standard of women’s basketball, epic results, the best home-grown talent and an amazing crop of imports.

And finalists Southside Flyers, UC Capitals, Melbourne Boomers and Adelaide Lightning all boast a superstar import integral to their chances of claiming the #WNBL20 championship.

Here, we look at the match winners from abroad.

A model of consistency, Southside’s most sizeable Flyer, measuring in at 198cm, scored in double figures in every regular-season game with a season-high 28 points against Adelaide in Round 12.

The 24-year-old from the Seattle Storm averages 16.7 points, 9.6 rebounds and has banked a remarkable 12 double-doubles this season including six in a row through December and January.

Southside opted to have just one import this season and coach Cheryl Chambers couldn’t be more delighted with their choice.

Russell and the Flyers meet Adelaide Lightning, and their star Brianna Turner, in the Semi-Final series in what looms as a defining match-up. Should Southside win through to the championship decider a showdown with either the UC Caps and Marianna Tolo and Kelsey Griffin or Melbourne Boomers twin towers Cayla George and Ezi Magbegor awaits.

A championship in her first WNBL season was a dream start for Kia Nurse but the Canadian young gun has grown and improved, taking her game to a new level in #WNBL20.

The 23-year-old finished the regular season as the competition’s leading scorer with average 21.3 points and produced a huge final three rounds with a career-best 33 points against the Flyers, 25 in the Caps win over Sydney then 28 in the final game against Adelaide.

In the home-and-away season, Nurse scored in double figures in every game for Canberra, never shooting less than 13 points.

With Kelsey Griffin sidelined through injury during January, Nurse not only stepped up for her team but, along with veteran Marianna Tolo, led a young UC Capitals line-up.

With a finals series last season under her belt, expect Nurse to light up on the big play-offs stage once again.

The barometer of the Boomers, this pocket rocket point guard is back on court and primed for play-offs after sitting out four games with a knee injury sustained in Round 13 against Adelaide.

But, in good news for the Melbourne faithful, Allen returned to the court in the final game of the season against Perth and clocked 17 minutes court time. While she didn’t score, she did dish out 7 assists, grab 5 boards and record a steal.

In #WNBL20, the 24-year-old with the great basketball IQ and deadly three-point shot has averaged 14.4 points, 5 steals and 3.5 rebounds with her season-best display coming back in Round 3 – 25 points against the Townsville Fire. Allen has scored in double figures in 14 of a possible 17 games.

After a disappointing straight-sets exit from last year’s Semi-Final series, Allen, like her team, will be determined to rebound and turn it on against the Caps.

The Lightning’s form has at times been inconsistent on the way to consolidating fourth spot but one constant factor has been the output of this rising star from the Phoenix Mercury.

Turner, 23, has averaged 17 points and 10 rebounds in her maiden WNBL campaign and quickly become a weapon Lightning coach Chris Lucas can rely on.

The super athletic forward has scored in double figures in 17 of a possible 21 games and registered 9 double-doubles.

Her efforts on the boards in Adelaide’s final round of the regular season were huge as she hauled in 36 rebounds, 24 against Perth then 12 over the Caps.

Like Nia Coffey before her, one gets the feeling this Lightning star is made for post-season action.