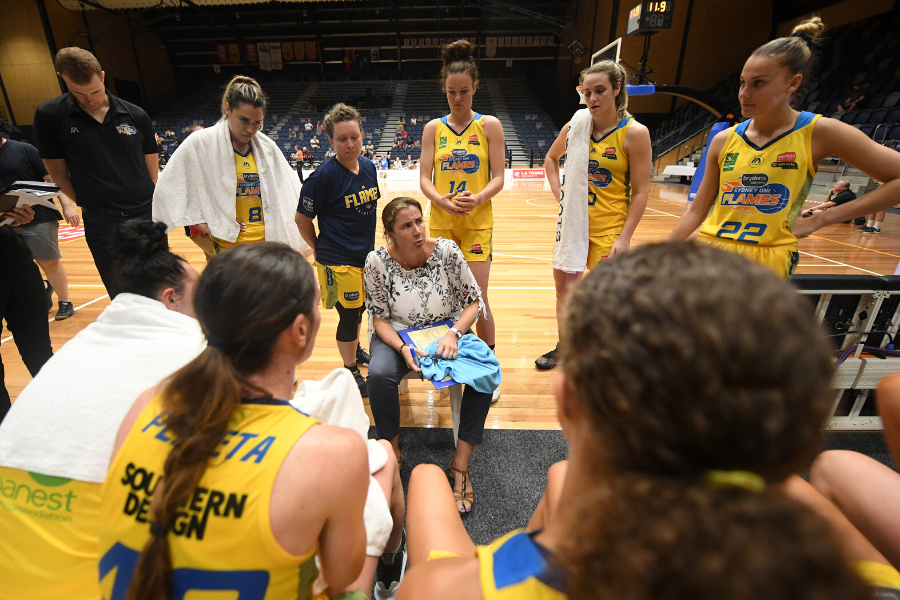 Sydney Uni Flames have their sights firmly on adding another scalp to their growing #WNBL20 collection.

The Flames have added some real heat to the play-offs race and are breathing fire down Adelaide Lightning’s neck. A pair of weekend wins last round put Sydney equal on wins with the Lightning following their forgettable performance, and loss to Melbourne.

Coach Katrina Hibbert has mastermind upsets over 3 of the top 4 sides – Flyers, Capitals and Lightning – and on Sunday, at home, her team can take the split over Adelaide.

Player of the week Alice Kunek says her team is riding a wave of confidence with 3 wins from their past 5 starts.

“It’s going to be a tough game, Adelaide are such a talented group and they will have played before they get to us,’’ she said.

“We’ve got confidence. We’ve beaten them at home, we are playing a good style of basketball but we have to come ready to play. It’s not going to be an easy game, we all know that.

“It’s all going to be a defensive focus for us as it is every week.”

Chris Lucas’ Christmas wish could well have been a much-improved performance and win following last round’s disappointment against the Boomers.

Early MVP fancy Brianna Turner did it at both ends for Adelaide and couldn’t be faltered but, aside from Steph Talbot’s second half, lacked support from her team mates. Captain and court general Nicole Seekamp had an uncharacteristic 9 turnovers in Melbourne and is primed to rebound; greater contributions from Lauren Nicholson and import Kathryn Newbold are critical for Adelaide who are now in a fight to remain in the 4.

Consistency is now key for the Caps who in Round 10 notched their first victory without the injured Kelsey Griffin.

Keely Froling, with a career-best 30 points and 10 boards, stood up and delivered against the Spirit and has now set a high bar for herself. Watching Nurse and Turner light up for their respective teams brings as much anticipation as Christmas Eve.

Melbourne has won in array of ways in #WNBL20 and although it was far from pretty against Adelaide it proved effective.

At the State Basketball Centre last weekend, Lindsay Allen again reminded the league why she is one of the WNBL’s premier imports in recent memory. Co-Captain Cayla George fouled out early in the final term and the Boomers need her out on the floor with Abby Bishop in a rich vein of form for Townsville.

The Fire had 5 players score in double digits in their Round 10 defeat to Perth, now they must go a step further and claim a second road victory for the season.

Bendigo’s losing streak is 1 defeat away from double figures and coach Tracy York want to avoid that, restore confidence and finish 2019 on a winning note.

The Spirit showed just that in their defeat to the Caps but must charge out of the blocks here and set the tone with a big first quarter.

Carley Ernst has had a good couple of weeks and young stars Demi Skinner and Shyla Heal remain the shining lights in a challenging campaign.

Bendigo will hit the floor fresh, with the Fire having played the night before in a big Victorian weekend double, and can be led to a rare victory by the experienced and smart heads of Kelly Wilson and Tessa Lavey.

For the first time this season, the Lynx are building some momentum.

Consecutive victories, over the Boomers and Fire, has sparked something in Perth who now sit just one win out of fourth spot. Success against the defending champions, on the second leg of their road trip, will have Andy Stewart’s team believing they can play play-offs for a fifth straight year.

#WNBL20 is treating us to brilliant match-ups each and every week and this clash out west is no different. Marianna Tolo v Imani McGee-Stafford, Olivia Epoupa v Katie-Rae Ebzery and of course the WNBA guns in Nurse and Atkins. Bring it on!