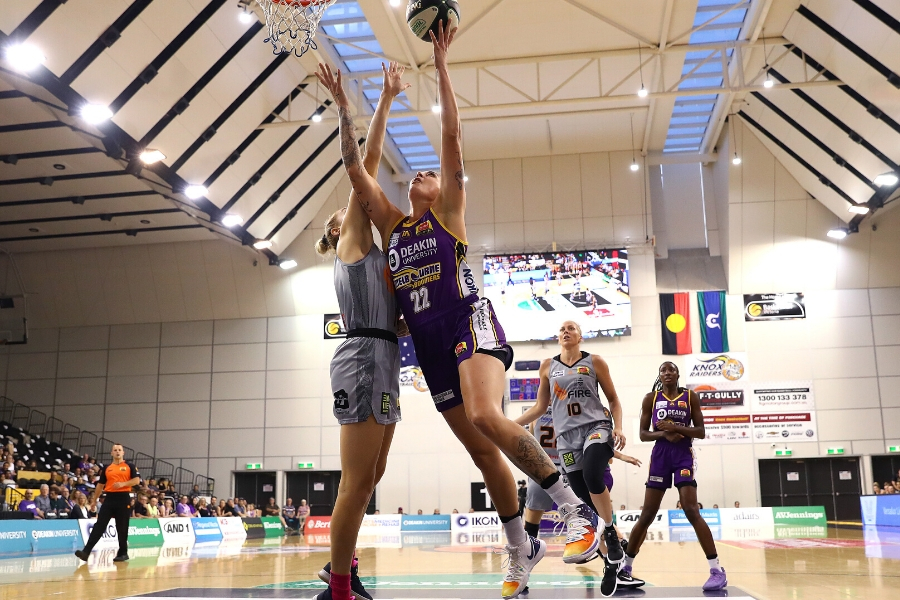 Lightning struck twice in Round 11 as Adelaide gave itself some breathing space in fourth spot on the #WNBL20 ladder.

After a disappointing loss to Melbourne before Christmas, the Lightning bounced back to defeat the Caps in overtime and account for Sydney, in Sydney, to move two games clear of the Flames on the ladder.

“It was good to have a little break and to get two wins will help us a lot because we haven’t been able to build any momentum so far this season. Hopefully we can build on it heading into the end of the season and finals,’’ Seekamp said.

“We’ve had a refresher and are now treating it like a new season. We’re starting 0-0, forgetting about the first part and off to a good start.

“Everyone can contribute in some way and everyone did that against Sydney. Laura Hodges came on early and had a massive impact off the bench, same with Chelsea Brook, everyone who stepped on the court gave us their all and that really helped in the end.”

It was a team effort for Adelaide against the Flames on Sunday with Kathryn Westbeld (17 points), Seekamp (13 points, 6 rebounds, 5 assists), Steph Talbot (13 points, 9 points, 9 assists) and Lauren Nicholson (13 points) filling up the stat sheet.

Alice Kunek was again massive for Sydney with a game-high 26 points. She scored 18 to half time with Sydney trailing by two points at the main break.

There was high drama at Titanium Security Arena, just when a Talbot triple looked to have given Adelaide a nail biting 1-point victory – the shot was deemed a two and to overtime the game went.

It took an extra period but the Lightning eventually got the job done, beating their opponent from last year’s epic Grand Final series.

Talbot was telling for the winners, combining 21 points and 16 boards with 4 assists. Lauren Nicholson was on-song after an off-night in Round 10. Brianna Turner registered yet another double-double (14 rebounds, 11 points) after a slow start, while Seekamp was back to her best dishing out 9 assists.

While the Caps were disappointed with their efforts at both ends of the floor – they lost the rebound count 60-49 and shot at 34 per cent from the field, they were again led well by Marianna Tolo (22 points, 12 rebounds) and Kia Nurse (16 points, 5 rebounds, 5 assists).

Olivia Epoupa grabbed a sensational 12 rebounds along with 7 points and 4 assists.

Co-captain Cayla George provided the fire with a massive 27 points as the Boomers strung together consecutive victories.

On their home floor, second-placed Melbourne dominated in the paint 42-22 as they pushed their season ledger to 10-4.

Stella Beck was a spark off the bench with 14 points, Lindsay Allen added 10, while work horse Kalani Purcell earned her 9 rebounds and 6 assists.

Abby Bishop’s 19 points and 5 rebounds paced the visitors in the first leg of their Victorian road trip, with Tess Madgen (13 points, 4 assists, 3 rebounds) and Julie Vanloo (10 points) chiming in.

Finally! The Spirit broke through for their first win in 8 weeks with a heartstopper over the Fire which ended a 9-game losing run.

Carley Ernst, who totalled a game-high 24 points (4-of-6 threes), 6 rebounds and 2 assists, fittingly scored the winner. Abbey Wehrung (18 points, 6 rebounds, 4 assists, 2 steals and a block) and Demi Skinner’s 16 points and 5 boards were pivotal

The Caps made sure they returned home with a split weekend, rebounding against the Lynx in Perth.

Rebounding was an area of the game the visitors dominated and it was the smallest player in the competition, 165cm Epoupa, who grabbed a match-high 14 boards!

Nurse had 5 triples amongst her 23 points in addition to 7 rebounds and 5 assists while Tolo (21 points, 10 rebounds) continues to wind back the clock with some vintage performances for her beloved Caps.

Katie-Rae Ebzery (25 points) was a shining light on a dark afternoon for her side and the only Perth player to score in double digits.