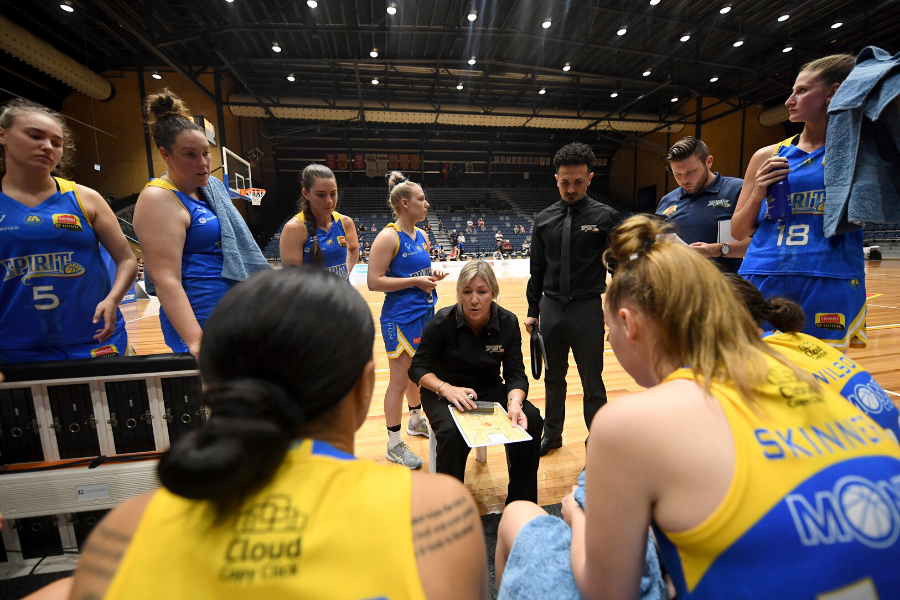 Fresh from a breakthrough win, Bendigo Spirit get to measure themselves against a #WNBL20 pace setter in the first round of the New Year.

The Spirit ended a nine-game losing run last weekend with a 79-78 victory over Townsville Fire and now play host to third-placed UC Capitals.

Veteran guard Kelly Wilson, who last month reached 200 club games for Bendigo, says her team is up for the challenge.

“We were definitely relieved, so to get that win heading into the New Year is exciting for us. Getting that win and now moving forward to our next game gives us a lot of confidence,’’ she says.

“Canberra are loaded with individual talent and even though Kelsey Griffin is out injured, and she’s a superstar, they’ve had Keely Froling step up. We’ve had a really good week at training, focused on ourselves and we’ll try and get that win against Canberra on Friday.”

Wilson comes up against the team and teammates she won a championship with last season. She will also go head-to-head with her replacement Olivia Epoupa and protégé Maddy Rocci.

“The league just keeps getting stronger and stronger every year. This year, it’s pretty guard heavy and it’s great to be able to match up against some great players week in, week out.”

With a bye in Round 11, the Flyers are well rested and enjoyed a six-day break over Christmas but it’s back to work now with a tough road trip.

Southside lost to Sydney in Round 10 and were without Jenna O’Hea and Mercedes Russell who are on the plane this weekend. Their two losses for #WNBL20 have both been at home so it’s crucial a perfect away record remains intact this round.

Perth were disappointing against Canberra at home last Sunday and, having lost to Southside in overtime earlier in the season, know four-quarters of their best is worthy of a win.

Katie-Rae Ebzery is enjoying a superb season but was the only Perth player to score in double figures against the Caps. Alison Schwagmeyer-Belger is overdue for a trademark performance and Imani McGee-Stafford must be on against Mercedes Russell.

The Fire wrapped up 2019 with a pair of defeats, to Bendigo then Melbourne, on their Victorian road trip but can launch the New Year on a winning note in front of a healthy home crowd.

Abby Bishop is a model of consistency in a lean team season and with Opal Darcee Garbin get to show their wares amongst a great match-up with Adelaide star and MVP fancy Brianna Turner.

The guard battles in Townsville will be both intriguing and critical with national teammates Tess Madgen and Nicole Seekamp barometers for their respective sides and Lauren Nicholson and Micaela Cocks ready to impact.

The Lightning return home to host the Flyers, and after defining wins over the Caps and Flames to end 2019, are back on track and out to sew up fourth spot.

When the sides last met in Round 7, in Adelaide, the visitors prevailed 91-85 and Chris Lucas will have his side primed for an upset and looking to replicate their efforts against the Caps in extra time.

Southside won this Perth-Adelaide road trip back in Round 7. There’ll be plenty of interest around how O’Hea and Russell pull up for their second game on the road and while they are certified stars, the experienced and calm head of Leilani Mitchell and likes of Bec Cole, Sara Blicavs and pinch hitting Anneli Maley can ensure it’s another successful journey for Southside.

After falling to the Lightning in overtime, Canberra responded with an emphatic 76-59 victory over Perth in Round 11.

Marianna Tolo and Kia Nurse are in red hot form, their leadership as impressive, Keely Froling is playing an important role in the absence of Kelsey Griffin, while pocket rocket Olivia Epoupa is punching above her weight, and height, blitzing the boards.

Perth must restore some pride in this fixture after last round’s capitulation. Recent wins over Melbourne and Townsville highlighted what the Lynx can conjure on a good day, but those and consistent team-performances have been few and far between in #WNBL20.

The Flames have beaten every side in the top 4 (Southside Flyers, UC Capitals, Adelaide Lightning) except the Melbourne Boomers and here in front of a national audience on Fox Sports get the chance to add another upset to their impressive collection.

Sydney, without injured star Colleen Planeta who has ruptured her ACL, were gallant against the Lightning last round but will be better for having a game under their belts as they embark on the rest of their campaign without the US-born big.

Alice Kunek is high on confidence and form and will be primed for a big afternoon against the side she once captained. Katrina Hibbert needs more from Tahlia Tupaea and Ally Wilson here with Melbourne rolling along very nicely, comfortable winners over Townsville last start.

Cayla George, Ezi Magbegor and Lindsay Allen, all producing fabulous individual campaigns, form the big three for the Boomers. Stella Beck impressed off the bench against the Fire and Kalani Purcell continues to set the bar for work ethic.