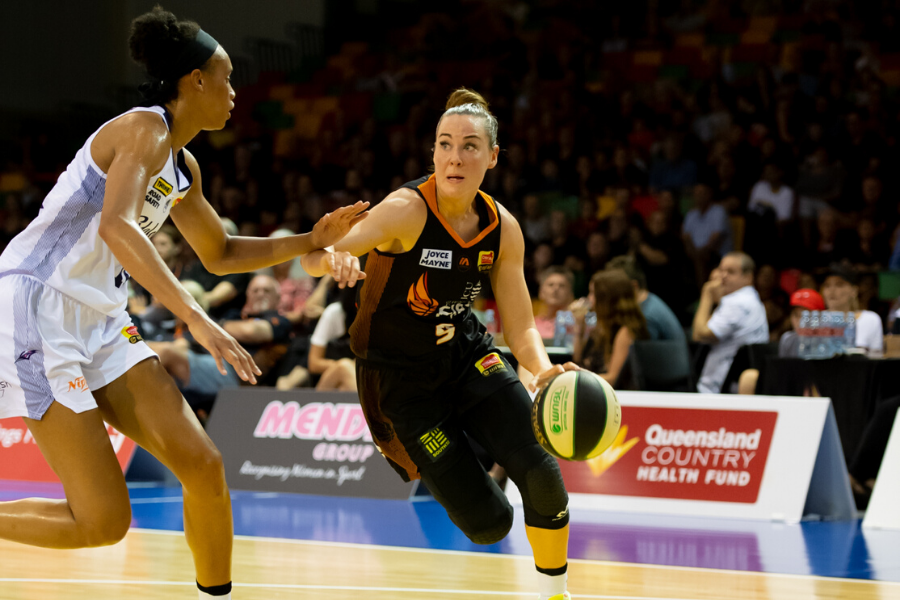 Townsville Fire hit the road this weekend full of confidence and self-belief according to import guard Julie Vanloo.

Days after parting ways with star Abby Bishop, the Fire breathed just that in Round 13, stunning the UC Capitals then coming from behind to defeat the Sydney Uni Flames.

Vanloo says her team is welcoming the chance to tackle the Adelaide Lightning and Perth Lynx in the league’s toughest road trip.

“It was so great to have two wins after a season of ups and downs. It was so beautiful to see how we can contribute as a team. It feels great,’’ she said.

“We have a big weekend coming up, it’s the longest road trip with flights. We have confidence, it’s nice to have a road trip where you want to go for a third or fourth win in a row.”

The Lightning has the split over the Fire, while Townsville beat Perth in overtime back in Round 4 to land their first victory of the season.

“We know Adelaide is a very good team, they play amazing basketball. They came two times to Townsville and just killed us. We really want to have a little revenge and hope we take the W,’’ Vanloo said.

“We don’t have pressure. We are playing really well, we’re building something nice and I hope that we can have a strong end to the season. It’s nice to play against the top teams to see if we can keep up this good flow that is in our team.”

Fourth-placed Adelaide (10-7) needs to improve its shooting beyond the arc and bounce back from last round’s narrow defeat to Melbourne, while Perth is coming off a big win over Bendigo on their home floor and parted ways with import centre Imani McGee-Stafford during the week.

The possible finals previews keep on coming in Round 14 with the third-placed Capitals home to second-on-the-ladder Melbourne.

All eyes will be on the defending champs and how they respond from last week’s thrashing at the hands of Townsville.

The Boomers, too, are coming off a defeat albeit the margin was just 2 points to the Flyers in overtime.

Lindsay Allen (knee) missed the derby and won’t play this weekend but Maddie Garrick has been cleared to return to the court after a head clash with team mate Toni Farnworth during the derby.

Ezi Magbegor will be full of confidence after a dominant display and career-best WNBL figures against Southside, while co-captain Cayla George and import guard Sophie Cunningham are amid purple patches of #WNBL20 form. New Zealand international Stella Beck continues to make a valuable contribution to Guy Molloy’s system.

After positioning themselves within striking distance of the Top 4 and Adelaide, injury-hit Sydney have now lost 3 of their past 5 games.

Lauren Scherf’s enjoyed a solid few weeks at both ends of the floor, with consecutive double-doubles, and must remain a presence in the absence of Planeta.

Melbourne back up 24 hours after facing the Caps; returning home with a pair of road wins will give the Boomers hopes of clinching top spot an almighty boost.

The Spirit knocked off the Caps last time they played at home and, with the Flyers missing Captain Jenna O’Hea, will draw on that result in the hope of landing another big scalp.

Shyla Heal’s breakout season has reached new heights in the New Year. The teen guard posted career-high WNBL numbers against Canberra then did better and sunk 30 points last round in Perth.

The Flyers were soaring after an overtime victory over the Boomers but their wings were clipped with news O’Hea required surgery on a broken wrist.

Southside has been reliant on its starters with O’Hea, Leilani Mitchell and Mercedes Russell enjoying outstanding campaigns and Bec Cole and Sara Blicavs both in form, now some extra opportunity is headed the way of Aimie Clydesdale, Keira Rowe and Anneli Maley.

Another top four battle and potential finals preview and if this contest wasn’t full of intriguing story lines the absence of O’Hea adds another huge layer of fascination.

The second leg of a crucial weekend for both sides, the Caps will have a 24-hour hop on the Flyers but have to catch a flight in between.

Russell v Marianna Tolo sees two of the competition’s premier and form bigs go head-to-head, while Mitchell facing off with Olivia Epoupa also promises plenty. The French guard has had a couple of quiet games and her side needs a greater output and influence at home then at Dandenong.

Blicavs scored just 2 points against Melbourne last week but was big defensively. After winning a recall to the Chemist Warehouse Opals team this week, replacing O’Hea, expect a scoring blitz and a pep in her step in Round 14.

Southside will celebrate coach Cheryl Chambers’ 250 game milestone at their first home game of 2020. Chambers joins Karen Dalton as the only two women to reach 500 WNBL games as a player then coach.