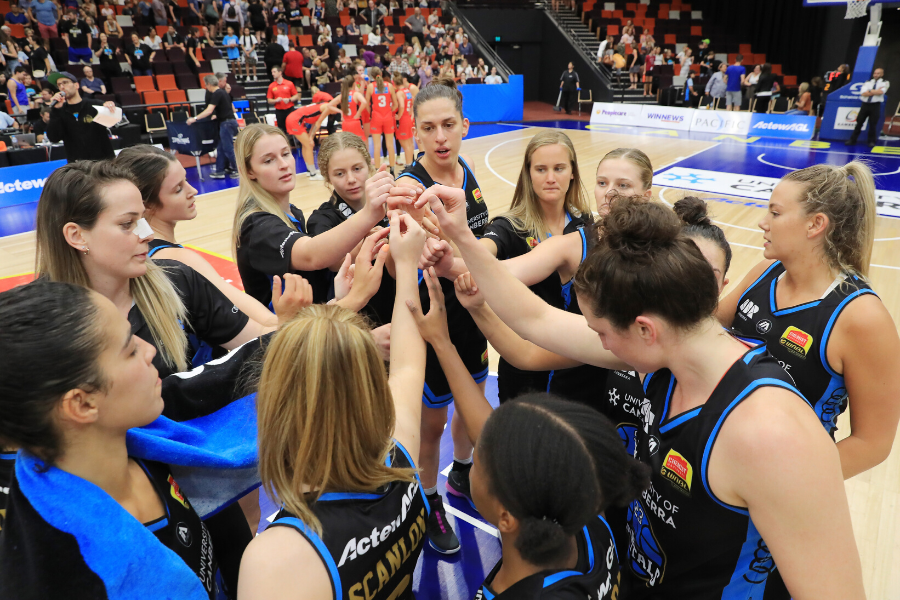 The #WNBL20 finalists have been decided but there’s still plenty on the line in the final round of the Chemist Warehouse WNBL regular season.

The UC Capitals must beat Adelaide Lightning, in a top 4 tussle, to finish second, and with the season-split over Melbourne, Caps would take home-court advantage in the semi-final series against the Boomers.

If the Caps lose and the Boomers beat Perth Lynx then Melbourne will finish a game clear in second spot and claim home advantage at the State Basketball Centre.

The Lightning have a double and will be looking to fine tune ahead of their post-season date with the Southside Flyers. Both Adelaide and the Flyers play Sydney Uni this weekend.

The Flames, Lynx, Townsville and Bendigo all looking to end their campaigns on a winning note

These two sides end the year with doubles and are desperate to complete their seasons with much-needed wins.

The Flames fought hard against the Caps last weekend and were pleased with the season-best outing of Britt Smart and continued form, at both ends, of Lauren Scherf.

The Spirit had a night to forget against Perth last round and were unable to celebrate Kelly Wilson breaking the league games record and Gabe Richards’ 250th game for, and last at, Bendigo with a victory. The best mates and veterans will want to atone for that this weekend.

Shyla Heal and Demi Skinner have been shining lights for coach Tracy York and Bendigo in #WNBL20, add in Tessa Lavey, Abbey Wehrung and Carley Ernst and the visitors have enough firepower to fan the Flames.

Sydney veteran Sarah Graham will be farewelled in her final home game.

The Lightning were on the backfoot before the ball was even tipped at Dandenong Stadium last week, losing Lauren Nicholson to a thumb niggle in the warm-up.

Adelaide’s form has been both brilliant and inconsistent but the home side has a great platform to play team basketball and produce a solid four-quarter effort against Perth.

Katie-Rae Ebzery is in All-Star 5 calculations off the back off her stellar season while Marena Whittle has hit some strong and influential form for the Lynx over the last few weeks.

There’s good and bad news when it comes to Canberra. The good news for the reigning champs is that they’re humming and back in business. And that’s the bad news for league opponents.

Kia Nurse has impressed as the WNBL’s leading scorer this season but the young gun has also displayed leadership qualities in the past few weeks in the absence of Kelsey Griffin then Keely Froling.

Griffin is back and not missing a beat. Maddi Rocci has stepped up immensely over the past fortnight and is a crucial part of Paul Gorris’ puzzle.

It’s a mini final for the Caps, they need only win to secure second place and home-court advantage over the Boomers in what looms as a tantalising semi-final showdown.

But beware of Adelaide and Chris Lucas who can provide a spanner in the works.

The Spirit snapped a 9-game losing run before Christmas with a thrilling 1-point win over the Fire and want to end a lowly season with a big away result.

The Fire were super, especially on the defensive end, on their home floor against Melbourne last week, narrowly falling to the finals-bound Boomers. Bridget Carleton has finished her debut WNBL season in strong fashion and collected Player of the Week accolades along the way for her efforts.

Darcee Garbin, Tess Madgen and Micaela Cocks have all enjoyed mini patches of form this season and if they put it all together can ensure Townsville finish its campaign on a winning note and look ahead to the next with hope.

The Boomers will hope Adelaide can knock over the Caps in the nation’s Capital, but all focus will be firmly on Perth and building on confidence and form ahead of a third consecutive finals appearance under Guy Molloy.

Ezi Magbegor has topped the Melbourne stat sheet over the past few weeks, her brilliant start to the year a great sign ahead of a big 2020 for the Chemist Warehouse Australian Opals and next week’s Olympic Qualifiers in France. Gun point guard Lindsay Allen (knee) has missed the past four games yet Melbourne has done a terrific job in her absence and won two and lost two of those fixtures.

Both Boomers vs Lynx games this season have been decided by 9 points or less with Melbourne winning by 9 in Round 8 then Perth prevailing by 2 the following round.

The Flyers returned to their winning ways with a convincing result over the Lightning in the penultimate round of the regular season and against Sydney get another opportunity to gel, in the absence of Jenna O’Hea, before finals.

Bec Cole was sizzling last week with 28 points, 20 scored in the first half, while Mercedes Russell still made an impact despite finding herself in foul trouble. That allowed Louella Tomlinson to register some valuable minutes and she along with Anneli Maley and Bec Pizzey could get some key opportunities this weekend.

The Flames beat the Flyers, without O’Hea and Russell, before Christmas and their best has also toppled Adelaide and Canberra. Sydney is hopping to the finish line on one leg but has shown plenty of guts under first-year coach Katrina Hibbert who gives her team a chance of another upset here.