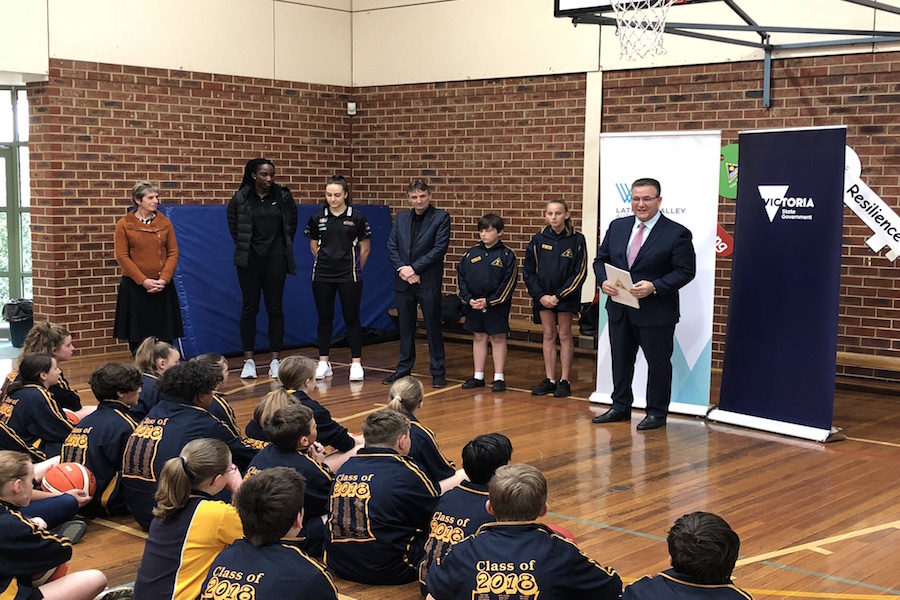 Boom Time For Basketball In The Valley

The Deakin Melbourne Boomers are set to play six games in Gippsland over the next two years with Sale, Traralgon and Warragul to enjoy WNBL pre-season action with one game at each location during September 2018 and 2019.

He was joined by star Boomers Ezi Magbegor and Chelsea D’Angelo, the latter returning to a region she holds close to her heart having made her way through Gippsland’s junior ranks all the way to national and international representation.

The deal will also include training sessions, junior clinics and coaching classes across the region, benefiting local students and players across the entire community.

The WNBL is Australia’s top women’s basketball competition and is recognised as one of the very best leagues in the world. These games will grow its fanbase in the Valley and inspire more kids to hit the court.

The two-year partnership is part of the Labor Government’s $85 million Latrobe Valley Sports and Community Initiative, which is building new sporting infrastructure and bringing the best sporting events to the region.

An extra $2 million will also be provided to help Regional Tourism Boards and Councils boost their local economies and jobs by attracting new visitors and new events.

This year’s Triple Crown between the Boomers and Spirit is set to take place between Thursday September 13 and Sunday September 16.

“This is a massive sporting coup for the Valley – these games are a great chance for locals to see the best female basketballers in their own backyard.”

“We’re bringing the big events to our regions because they create jobs, fill our hotels, attract new visitors and strengthen the economy.”

“We’re thrilled to add the Boomers to our growing events calendar. Whether you’re an aspiring basketballer or small business owner, events like these are a big win for the local community.”

“Gippsland is an incredibly rich region for all sports, in particular basketball and we can’t wait to help promote participation across the Latrobe Valley and Gippsland community via our player, coach and management visits over the next two years.”

“Chelsea D’Angelo is a world-class junior from Traralgon and has signed with us for the next four years, our captain Jenna O’Hea is one of Australia’s very best players and also comes from Traralgon, while Jaz Shelley is from Moe and has also just joined us.”

“We’re aware of many budding young players developing their skills across dozens of basketball clubs throughout the Latrobe Valley. We plan on adding at least three rising Gippsland-based players to our Boomers team for the Triple Crown event and give them a taste of life with a WNBL club.”