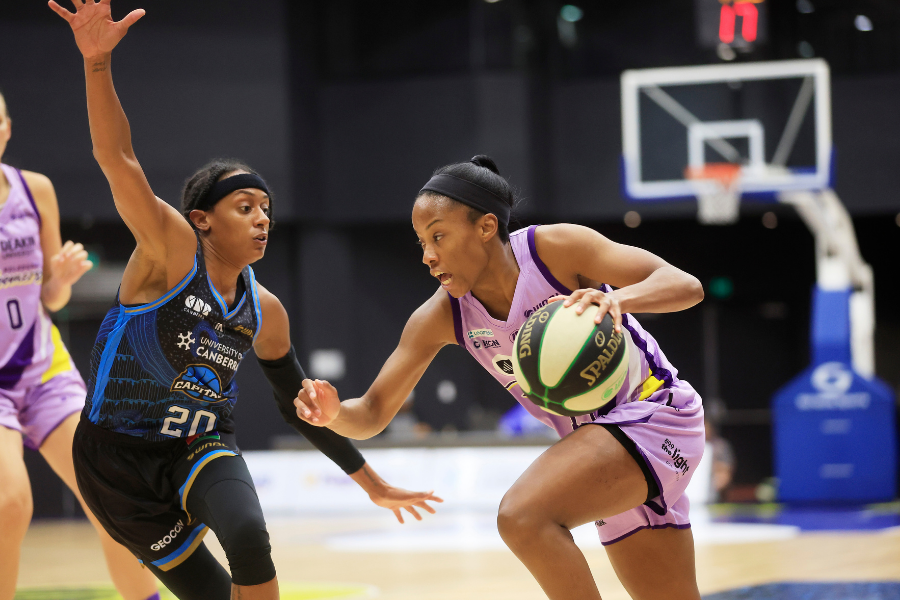 The Deakin Melbourne Boomers showed their grit and determination with a 2-point victory against Canberra’s UC Capitals away from home, 78 – 76.

Despite struggling to find rhythm and momentum earlier in the game, Melbourne ignited their fire in the final term to close the margins and overpower Canberra.

Melbourne struggled to find their groove in the first term with turnovers and missed opportunities, whereas the Canberra were on fire offensively as they were hitting from long range and inside the key.

Despite this, Melbourne maintained scoreboard pressure as Tess Madgen started the scoring with a shot from beyond the arc. Allen kept Melbourne in the contest as she continued to capitalise at the foul line and had 9 straight points for the team in the closing minutes of the term. Canberra led the first quarter, 20 – 16.

Melbourne was unable to gain momentum in the second term as Canberra continued with their offensive accuracy. The game started to heat up with end-to-end shooting. Canberra’s Tahlia Tupaea could not miss from beyond the arc, but Carley Ernst was quick to respond with a three keeping Melbourne on the scoreboard.

Brittney Sykes hit a long-range two at the other end which was responded to by Allen with an aggressive entry into the key. Allen continued to fire up for Melbourne side and maintain scoreboard presence when she hit a corner three.

George also brought composure and energy, as she hit a crucial three point shot and executed a strong reverse layup, to keep Melbourne within touching distance. Canberra maintained their momentum and extended their lead through dominance in offence, they led by 44 – 32 at the half break.

Melbourne had to bring the heat in the third term to stop Canberra’s consistency and momentum on the scoreboard. Madgen started her side off with a shot from beyond the arc, whilst Allen forced an important turnover in the opening minutes.

Tiffany Mitchell showed that her team wasn’t going away, as she hit three points from the perimeter, as well as driving into the key to convert soon after.

Canberra’s defensive pressure and physicality increased as they continued to try everything in their power to maintain control of the game. Allen simply responded to the increased, using her explosiveness when entering the key, capitalising on the foul line opportunities, and hitting a floating layup.

Despite some miscommunication in Melbourne’s defensive set, they were able to get within striking distance at the end of the third term. Canberra led by 63 – 55.

Allen brought the grit and spark for Melbourne in the final term, executing a three-point play as she cut inside the key and went to the foul line within the starting minutes – reducing the margin to 7. George followed her teammate hitting beyond the arc, closing the gap, and showing the Melbourne’s tenacity to gain the side back their momentum.

Melbourne continued to bring the scoreboard pressure as Mitchell worked hard inside the paint, reducing the margin once again. After a huge defensive effort, to collapse Canberra’s momentum, Melbourne’s captain, George, levelled up the score with a huge three-pointer.

Melbourne had the force on their side to claw back the win, as they continued to display strong defensive sets, making it difficult for Canberra to score.

Allen was unstoppable as she drove along the baseline for a reverse layup. This was followed by a steal from George, giving Melbourne possession. Allen then stepped around Canberra’s Mikaela Ruef to flawlessly drop the ball into the basket.

With 3 minutes remaining, Melbourne took their first lead of the night. Melbourne flipped the momentum in their favour since the half time break – with 42 points to 27 points (Canberra) scored in the third quarter, and 21 points to 8 points in the final quarter.

Melbourne led by just 2 points with 6.1 seconds left, as Canberra’s Ruef hit a mid-range two, Melbourne was with possession in their offensive half and had the control.

Canberra got a hand on the ball as Melbourne attempted to keep it moving around the arc’s perimeter. Sykes moved into offensive transition, struggling to control the ball, and was unable to beat the clock.

Melbourne walked away with a win in the nation’s capital, as Allen kept the scoreboard pressure through all quarters and both teams did all in their power to keep the fire ignited in the final term.

Melbourne brought the intensity to the championship contenders and hope to continue this run of wins into their next matchup against Bendigo Spirit, for their 10th Anniversary of the last WNBL Championship, at the Boom Box on Sunday the 6th