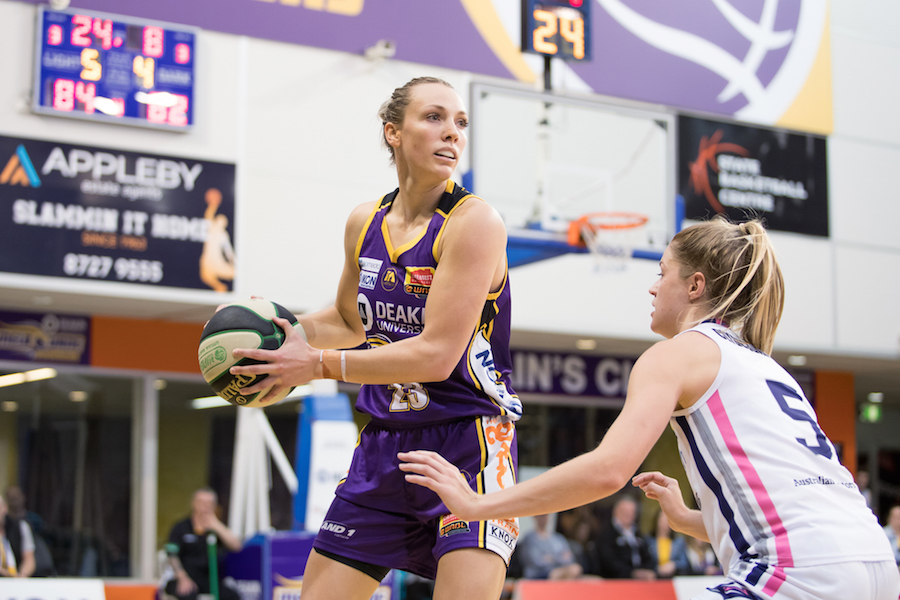 The Deakin Melbourne Boomers have secured their eighth win of the 2018/19 Chemist Warehouse WNBL season with a nail-biting 2-point victory over the Adelaide Lightning, clinching the 84-82 result in the dying seconds.

Loud and proud, 2,168 passionate fans came along to the Giveaway Sunday game at the State Basketball Centre for what was the first meeting between the two teams this season.

In her 100th game, Steph Talbot started things off early for the Boomers with a big three-pointer, it instantly engaged the audience and paved the way for a fun afternoon of WNBL hoops.

Player of the Week Lindsay Allen then shortly joined in with a basket before Maddie Garrick hit truly from the free throw line. Another Allen basket was made and then Jenna O’Hea got a three of her own. The Boomers led by 2-points midway through the first which extended to a 6-point leader by the quarter’s end.

Sarah Boothe kicked things off in the second period with a two-point jump shot before Talbot and Allen made further scoreboard impact. With five minutes left in the quarter, the Boomers looked in check as they led by 8-points courtesy of consecutive baskets from O’Hea.

The Boomers jumped out to a game-high 11-point lead with 2:50 left before half time, but the Lightning managed to claw the margin back to 5-points heading into the locker rooms.

Another quick start from Talbot in the third put the Boomers on the front foot, before the Lightning hit the scoreboard with multiple baskets. The momentum then started to shift the Lightning’s way as they got out to a 1-point lead midway through the third, their first lead since the opening quarter.

Ezi Magbegor soon managed to tie things up, before the Lightning shortly regained the lead.

Neither team got beyond a 2-point lead before the end of the third quarter, as the scoreboard continuously went back-and-forth. But it was the Boomers who stole a 1-point lead on the buzzer with an incredible Allen three-pointer from beyond half court.

As the ball swished it instantly brought a giant roar to the State Basketball Centre.

Skipper Jenna O’Hea made the first move for the Boomers in the final quarter but much like the third, neither team could hold a significant lead. It wasn’t until back-to-back three’s from Allen and O’Hea that the Boomers were able to get out to a 6-point advantage.

The Lightning however weren’t giving up the fight and moved back in front momentarily with a 7-0 run before Cayla George put this to an end with four baskets of her own.

Allen fouled out of the game with 1:30 on the clock and the Lightning tied the scores with only 45 seconds left. It was then O’Hea who hit the match-winner with a long-range two in the final 32 seconds of play. In the end, the Boomers managed to hold off the Lightning to claim a 2-point victory at home, final scores 84-82.

The Boomers have now moved to a 8-4 record to sit third on the WNBL ladder.

The Boomers next take on Townsville Fire this Saturday (Dec 1) 3pm at home for the Dads & Daughters game.

Tickets to Saturday’s game are on sale now – click HERE.