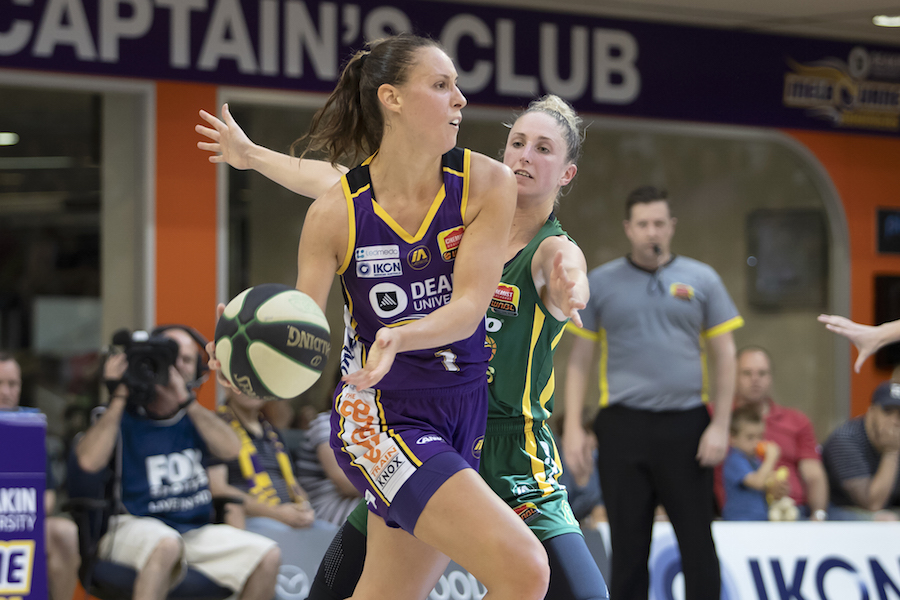 The Deakin Melbourne Boomers have moved one step closer to the Chemist Warehouse WNBL finals after firing into Christmas with a convincing 24-point win at home on Sunday afternoon against the Dandenong Rangers.

Looking to back up their victory last week against the Adelaide Lightning, the Boomers dominated the Rangers, 79-55, in front of a packed 2,629 crowd at the State Basketball Centre. The victory also handed the Boomers the Michele Timms Cup for the second year in a row, while also cementing their top-of-the-ladder spot.

Melbourne snapped up the lead late in the first quarter before pushing themselves out to a 14-point buffer before the end of the half. Lindsay Allen proved her influence in the opening half with a number of baskets and assists, while Steph Talbot dominated the shooting with a series of treys to bring her scoring to 15-points in the first two quarters.

In the second half, defensive pressure from Kalani Purcell and Cayla George allowed the Boomers to continue to push out the lead. On the opposing end, the Boomers offensive hustle was led by a total of nine treys for the match, compared to the visitors who didn’t score a single triple.

Outscoring the visitors 25-10 in the third term, the Boomers made it difficult for the Rangers to come back. Despite a late precautionary Maddie Garrick withdrawal, the Boomers were able to work together to control the game.

“It was an all-round great team win, in the first half we had a bunch of great contributions from everyone,” said guard Lindsay Allen.

“We’re clicking out there, we’re sharing the ball, we’re moving, and you can see how well we fit out there together.”

The Boomers star was in fine form ending with 27 points and 4 assists, backed up by 22 points from Steph Talbot, while Cayla George finished with 12 rebounds and 3 blocks.

“When we need Lindsay to be a facilitator, she’s a facilitator, ask her to be a scorer and she’s kind of taken that on as well,” said coach Guy Molloy.

“Her ability to play both ends of the court and play both roles has just made her a perfect recruit for this team.”

The Boomers have now won 11 games and are edging closer to a return to the play-offs, with just five games left in the regular season.

The win sets up a huge showdown with the Bendigo Spirit in Bendigo next Saturday. Having yet to get a win over the Spirit this year, the Boomers will be eager to make amends to ensure they remain at the top of the WNBL ladder.

NEXT UP: Fan Appreciation Night – Boomers vs Lynx – tickets HERE