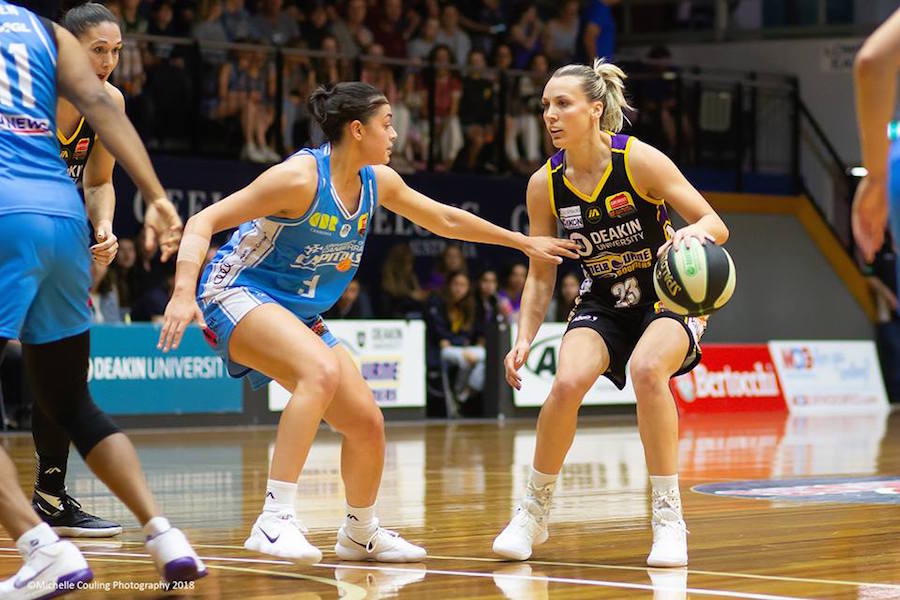 The Deakin Melbourne Boomers have ended their 4-game winning streak with a tense 2-point loss against the UC Capitals in Canberra, going down 70-72.

Playing their seventh game in 20 days the Boomers couldn’t capitalise on a strong first half and failed to find points at crucial stages of the last quarter.

Looking to make it two wins against the Capitals for the 18/19 season, the interstate stage was set for a massive clash.

In typical fashion, Cayla George opened up the scoring for the Boomers within the opening minute of the game. A Maddie Garrick 2pt jump shot followed by baskets from Player of the Week Lindsay Allen and Captain Jenna O’Hea got the Boomers to early 4-point lead.

Ezi Magbegor then soon got back on the board in her return game, scoring her first bucket in six games after recovering from a hand injury. The quarter ended with five Boomers with points as they trailed by 4-points heading into the first break. The second period saw O’Hea nail a 3pt in the opening minute to quickly cut the margin to 1-point. George was back at it again with a conversion before Allen drilled three consecutive scores to push the Boomers out to a 5-point lead.

The Capitals however, kept coming and levelled the scores again with just over five minutes to go. A series of offensive scores swung the momentum back the Boomers way, with Sarah Boothe and Steph Talbot getting on the scoreboard late in the quarter. In what was a tightly contested second period, the Boomers outscored the Capitals (26-11) to open an 11-point half time lead.

In the third, an early Capitals score was soon dismissed by a 2pt Talbot basket. Allen and Garrick joined in again to help the Boomers maintain their lead early on in the quarter. Much like the second, the Capitals kept fighting and back-to-back buckets for Kelsey Griffin managed to close the gap to 3-points. The Boomers didn’t stop however, as a late Garrick 3pt and a surge of Allen baskets allowed the Boomers to steady with a 4-point lead heading into the final quarter.

The Capitals opened the final term to edge the gap to 1-point, however, Talbot again was quick to reply with a two pointer of her own. The intensity was building as the score stood at 68-64 half way through the final quarter.

The momentum started to then turn the Capitals way, and scores became tied with 2:10 left on the clock. But, a silky transition by Allen managed to get the Boomers back on the front with just under 2 minutes remaining. A timeout was called with 1:30 left before the Capitals came back to even the scores. It was then Kia Nurse who nailed the game-winning jumper to get the Capitals to a 2-point lead with a mere 18 seconds left on the clock.

Unfortunately, time was the essence for the Boomers as the game slipped from their hands within the closing seconds. The Capitals managed to clinch a win on their home turf, final scores 70-72.

The Capitals used a big advantage at the charity stripe to advantage, relishing the chance to convert 14/17 free throws, while the Boomers only got to the line three times for the whole game.

The Boomers will now look to bounce back Sunday afternoon at home again against the Adelaide Lightning for the Giveaway Sunday game. Tip-off is at 3pm, and tickets are available HERE.