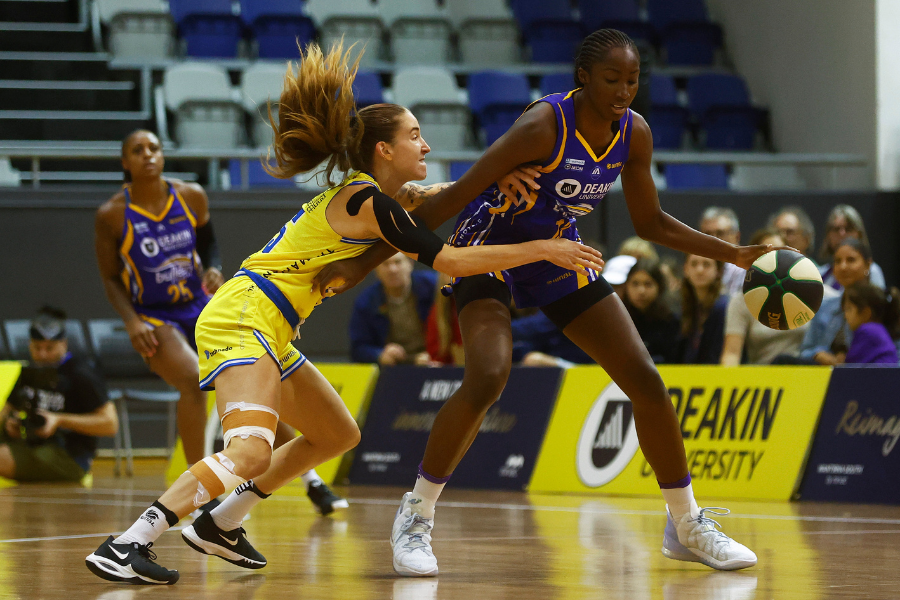 Despite the loss against Villawood Bendigo Spirit, Lindsay Allen continued her solid performances with 17 points, five rebounds and three assists.

Magbegor showed her dominance under pressure as she ended with 15 points and 6 rebounds and 1 assist, whilst Tiffany Mitchell, ended with a double-double – 10 points and 11 rebounds, alongside four assists.

Melbourne struggled to gain momentum, push the pace, and capitalise on shooting opportunities, misfiring on numerous occasions. Despite the shooting inaccuracy, Melbourne maintained scoreboard pressure throughout and brought the heat in the closing minutes.

Melbourne struggled to convert and capitalise on opportunities in the first term. Tess Madgen started the team off with a baseline drive to the basket, although Bendigo’s Megan McKay was quick to respond from the arc soon after.

Ezi Magbegor demonstrated her inside performance and athleticism on the offensive board.

Bendigo had an early lead, although Mitchell brought the heat as she pushed the tempo into offensive transition and showed her aggressiveness entering the key. On one occasion, resulting in drawing a foul on Alex Wilson and converting at the line, retaking the lead for Melbourne – 10-9 with 5:43 remaining on the clock for the first term.

Both teams struggled to execute accurate passes, Melbourne ended the term with 3 turnovers.

Cayla George and Izzy Wright linked up in the key as Wright cut inside along the baseline for a reverse layup. As the term came to a close, both teams started to look settled and were going basket for basket. Melbourne ended the period in the lead, 20-17.

Allen started the second term with an explosive drive along the baseline, followed by Magbegor executing a reverse lay-in. Both teams wrestled for momentum as they continued to go bucket for bucket.

Bendigo’s Anneli Maley and Madgen battled it out as they performed back-to-back drives into their offensive keys, both capitalising on their opportunities.

Mitchell continued to show her dominance as she stepped into a free throw line jump shot, quickly followed by an explosive drive to the basket, finishing strong at the hoop.

Bendigo’s Maley lit it up in the second term and Melbourne were unable to stop her rhythm as she went for back-to-back buckets for her side.

Melbourne led by seven points with 5:35 minutes remaining in the second term. Bendigo wrestled back to within 2 points with 3:50 left, as Mitchell misfired from the arc and Bendigo’s Tessa Lavey responded by hitting the triple at the other end, taking the lead.

Allen broke the Bendigo defence with a clear path to the rim for a layup, but with 20 seconds remaining, Bendigo’s Demi Skinner drove inside finishing with a layup and tying the scores.

Melbourne was unable to respond, and possession was back with Bendigo at two seconds remaining. Bendigo’s McKay got an inside look, as the shot fell in on the buzzer. Bendigo led Melbourne at the half time by 2 points, 37 – 35.

The third term started with George giving Melbourne an inside look and finishing at the basket. Allen and Madgen linked up early in the quarter as Allen passed the ball outside to Madgen, finishing the play with a strong drive into the key to convert on the scoreboard.

Bendigo’s Maley continued her hot streak as she scored three early baskets for her side. Both teams started to push the play and increase the pace of the game. Melbourne struggled to hit from outside the arc and missed numerous inside looks.

Despite the shooting inaccuracy, Melbourne kept scoreboard pressure as Magbegor cut through the key, letting the ball fall at the hoop, and George linked up with Mitchell for an inside jump shot. Bendigo’s Lavey hit a crucial triple to extend their lead.

Whilst Bendigo had all the answers in the third term, Melbourne struggled to get a bucket, misfiring on multiple opportunities with hitting one of seventeen shots from beyond the arc. Bendigo extended their half time lead to 4 points, 50 – 46.

Bendigo continued their momentum into the final term and extended their lead as Melbourne were unable to score in the opening three minutes. Allen found some urgency with aggressive entries into the key in the closing five minutes of the term.

Izzy Wright broke the triple drought for the Boomers, hitting from beyond the arc. Melbourne struggled to convert and capitalise on second chance opportunities.  Although, in the remaining two minutes, Melbourne fired up to take the Bendigo to a close finish.

Magbegor demonstrated a strong defensive play as she blocked Bendigo’s Cassidy McLean followed by Mitchell converting down the other end at the foul line. McLean responded with a wide-open shot from outside the arc, extending Bendigo’s lead to 11 points.

Magbegor provided numerous inside looks for Melbourne, reducing the scoreboard difference. Despite Melbourne efforts in the closing minutes, Bendigo held on for a three point victory, 68 – 65.

Despite falling short, Melbourne will be ready to bounce back for their next clash against Adelaide Lightning at The Lights Community and Sports Centre, Adelaide, on Sunday March 13th. A battle between two championship contenders that you won’t want to miss!