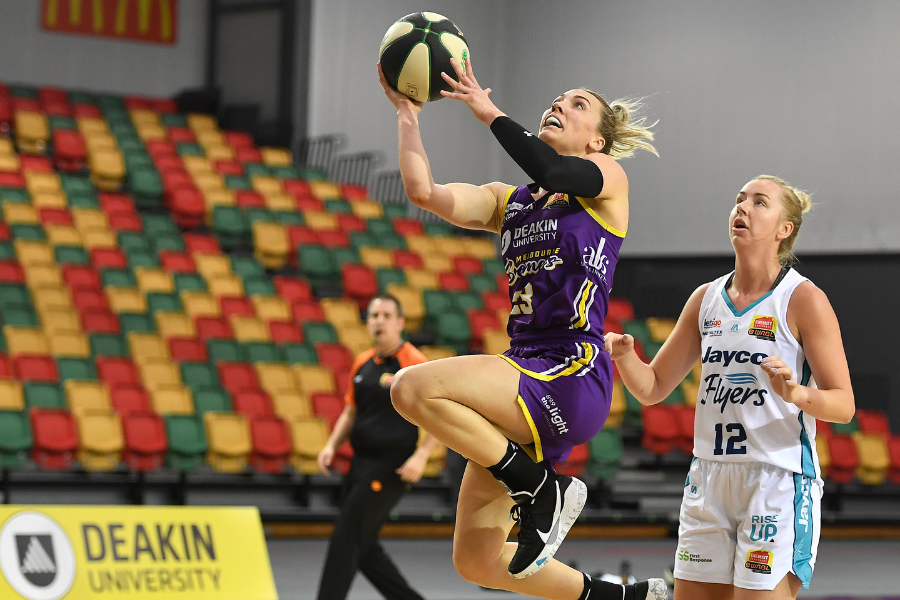 Another dominant display by Opals superstar Liz Cambage could not stop Deakin Melbourne Boomers pulling off the first upset of the 2020 Chemist Warehouse WNBL season.

The Boomers fired off a warning shot to the rest of the competition, upstaging Cambage’s star-studded Jayco Southside Flyers with a come from behind 89-72 win against the runaway title favourites at Townsville Stadium on Saturday.

Cambage stood tall for the Flyers, notching a double-double by halftime to finish with an equal game high 24 points plus 19 rebounds.

She was backing up from her 19-point cameo that inspired the Flyers’ impressive 42-point season opening win over Villawood Properties Bendigo Spirit on Thursday that made the league sit up and take notice.

However, it wasn’t enough after fellow Opal Cayla George and Tall Ferns sharp-shooter Ashleigh Karaitiana combined to help the Boomers reel in a 13-point second quarter deficit to seal the boilover.

Boomers co-captain George only had two points to her name by the end of the first quarter but then came alive to finish with 24 points, eight rebounds and four assists.

Karaitiana was damaging off the bench with 18 points thanks to stunning 6 from 8 three point shooting.

Remarkably the Boomers overall shot 59 per cent (16 from 27) from three point range.

The spotlight was on Cambage and her Flyers after even Boomers coach Guy Molloy claimed they were the “team to beat” ahead of the competition.

But the Boomers appear to have thrown the form guide out the window with the George-inspired victory that earned a 2-0 season start.

“I think she wanted to remind people she was an Opal too – she’s an Opals starter for a reason,” Molloy said of George’s display.

“I think it was a matter of finding a bit of confidence after a shaky first quarter.

“In the second quarter they got a bit of belief that they belonged on the same court and just took it away in the third and fourth.”

Flyers coach Cheryl Chambers wasn’t reaching for the panic button as her team prepared to back up on Sunday against Brydens Sydney Uni Flames in Townsville.

“We’ve got fairly new pieces in our puzzle. They (Boomers) have a returning group – I think that had something to do with it,” she said.

“Plus they shot the heck out of it and we certainly didn’t defend it.”

But Karaitiana caught fire and George stood tall as the Boomers grabbed a 62-55 lead at the final interval.