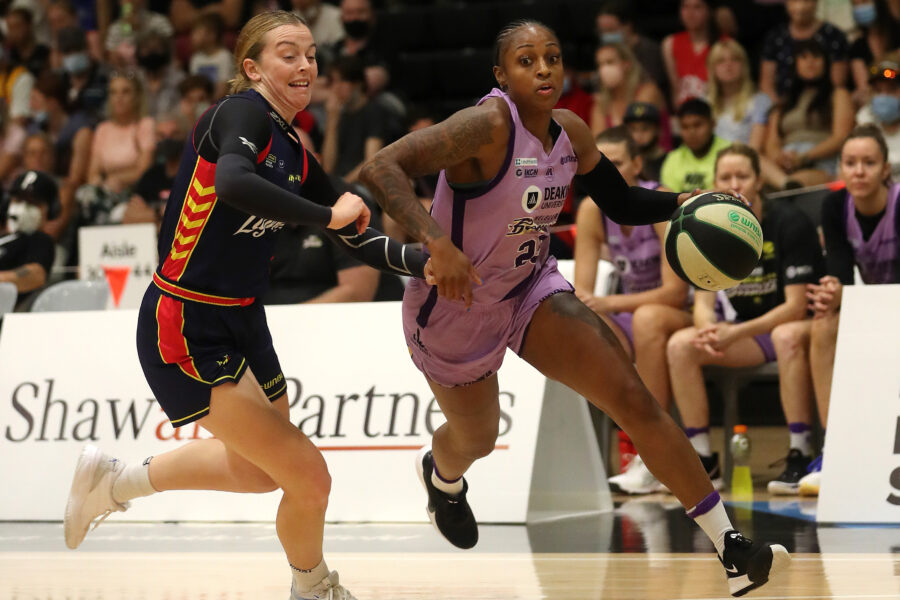 The Deakin Melbourne Boomers ground it out to a 12-point victory over Adelaide Lightning, finishing the semi-finals series 2-0 and heading to the 2021/22 Grand Final series. Final score, 61 – 49.

Lindsay Allen once again showed her dominance with 15 points, three rebounds and three assists. Tiffany Mitchell displayed what she can do under pressure, with 12 points and nine rebounds. Ezi Magbegor had a momentous impact, finishing with a double-double – 10 points, 12 rebounds and five steals.

Despite struggling with shooting accuracy, Melbourne converted when it counted the most, maintaining high tempo transitions, and pressure in defence. Adelaide stayed within touching distance throughout the second half, but Melbourne pulled away in the final minutes.

The first term was a defensive battle, as Adelaide’s Alanna Smith started the scoring for the night at the foul line. Tess Madgen responded quickly for Melbourne with a shot from the perimeter. Both teams struggled to hit their shots, although Adelaide’s Smith eventually responded with the same down the other end for her team. Smith ended the night with a game-high 24 points.

Melbourne were pushing the tempo in transition and had the potential to get into some foul trouble with three fouls in the opening minutes. Despite misfires from both ends, Melbourne maintained high pressure in defence and defensive transitions forcing difficult shots and numerous turnovers by Adelaide.

Magbegor and Allen linked up, as Magbegor passed outside to Allen for three – taking the first lead of the night. Melbourne went back-to-back buckets, as Madgen forced a turnover, giving Magbegor a fast break, driving to the basket.

With four minutes of the term remaining, Adelaide’s Marena Whittle hit back-to-back buckets for her team, giving them back the lead. Mitchell displayed her offensive footwork with a strong drive to the basket. Magbegor closed the term with a turnaround jump shot. Adelaide led at the break, 16 – 12.

Adelaide’s Smith continued her offensive accuracy, starting the second term with a hook shot at the basket.

Cayla George responded for Melbourne with a jump shot and displayed dominance in defence as she setup a defensive stop for her team. This was shortly followed by applying pressure on Adelaide’s Steph Talbot on a fast break, causing a misfire.

There were end-to-end misfires although, Adelaide kept their intensity and maintained their lead in the opening minutes.

Madgen and George linked up, as George converted at the basket, followed by Mitchell hitting a long two. Adelaide’s Talbot responded with a shot from the arc, as Magbegor lit it up inside the key making crucial offensive and defensive rebounds for Melbourne.

Melbourne continued to wrestle the lead back at the end of the term, as Magbegor displayed her athleticism with a hook shot, whilst Allen and Carley Ernst linked up – Ernst finishing at the basket.

Melbourne increased their ball and player movement as Mitchell took an O board, moving flawlessly around Adelaide’s Talbot to get to the basket. Magbegor forced a steal at the other end resulting in Allen and Ernst linking up once again, as Ernst converted from beyond the arc for three points.

Magbegor presented an inside look for Madgen, with Magbegor finishing inside the key. Melbourne took the lead in the final minute after an 11-point run, leading at the half time break, 29 – 25.

Adelaide’s Smith once again started the scoring for the third term with a strong drive to the basket. Allen responded with a strong entry into the key with a tough finish. Adelaide got the scores level within the opening minutes, but Melbourne were quick to hit two consecutive shots.

Mitchell made an explosive drive into the key, followed by Magbegor forcing a turnover giving Allen the opportunity for a strong drive to the basket, converting at the foul line.

Madgen hit a corner three and Allen got a wide-open look from beyond the arc, beating the shot clock.

Melbourne forced Adelaide to work hard for their baskets, although Talbot got the last say in the term, bringing her team back within 4-points. Melbourne led at the break, 43 – 39.

Smith brought her Adelaide team back to within a 1-point difference, starting the final term with a shot from beyond the arc. Adelaide struggled with turnovers (17 total) as Melbourne capitalised on the second chance opportunities.

Magbegor started Melbourne off with a spin jump shot inside the key. This was shortly followed by an intercept on an Adelaide pass, resulting in Ernst pulling up for a two. Magbegor continued to show her dominance covering the breadth of the court and put her body on the line on numerous occasions.

George and Magbegor linked up, with George finishing in the key. Madgen made an aggressive entry into the paint, drawing the defenders and passing the ball outside to George for a captain’s three.

Allen hit from beyond the arc in the dying minutes, extending Melbourne’s lead to 10-points – the biggest lead of the game. Mitchell sealed the game for the Boomers with a pull up jump shot, solidifying the win and sending the Boomers into the Grand Final.

The Boomers played with composure, determination and unison placing themselves in contention for the 2021/22 Championship. Melbourne will host the first game of the Grand Final series at the Boom Box with the date and time to be advised shortly (after a rescheduled Perth v Canberra semi-final due to COVID protocols).

The Boomers will come up against the winner of the semi-final’s series between Perth Lynx and UC Capitals, Lynx are currently leading the series 1-0.