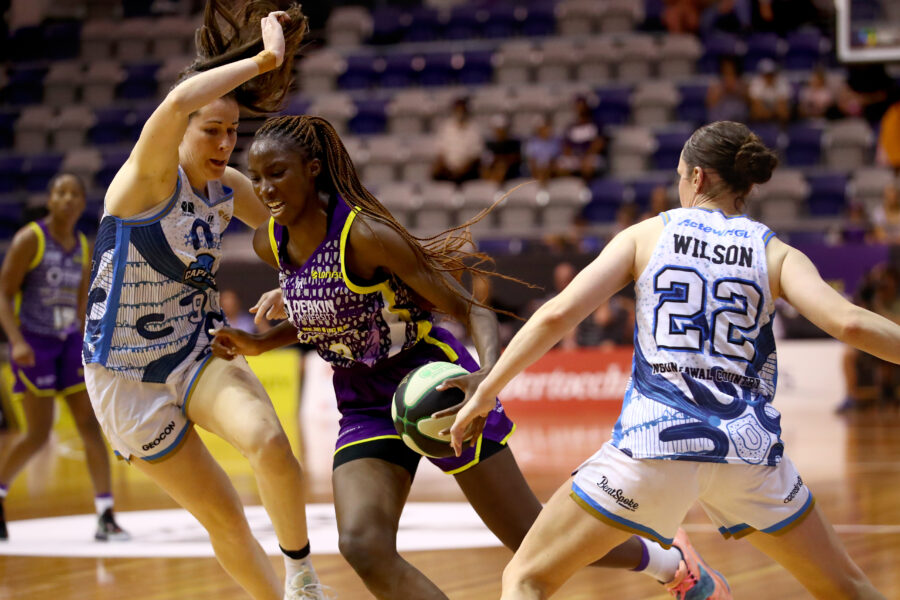 The Deakin Melbourne Boomers put on a clinic against the Canberra Capitals last night, taking away a 55-point victory and finishing their regular season rounds guaranteed in the top two.

The heat of the Melbourne side was difficult for Canberra to control, as Melbourne overpowered with their offensive and defensive rebounding (46 rebounds total), shooting accuracy (62%) and defensive pressure, causing numerous turnovers (20 in total) and forcing Canberra to make difficult shots (33% field goals).

Melbourne shared the load as each player made a significant impact on the game, whilst performing as a unified team.

Captain, Cayla George, brought the team alive with 100% shooting accuracy, hitting five from five from outside the arc and finishing with a game-high 23 points, eight rebounds, four assists and three steals.

Melbourne took the momentum in the opening minutes of the first term as Cayla George hit her first three of the night. Canberra’s Brittany Sykes quickly responded with a long range two.

Lindsay Allen and Magbegor linked up early, as Magbegor gave an inside look at the basket. Canberra responded to the fast and explosive pace of the game in the opening minutes but were unable to keep up with the intensity, missing numerous opportunities in their offence.

Allen hit from beyond the arc early in the term, as Magbegor gave her side yet another inside look and converted on a three-point play. Melbourne broke down Canberra’s defence through explosive transitions and fast break conversions. Melbourne led at the end of the term, 32 – 15.

Canberra came out firing in the second term as they wrestled back the momentum. Allen and Magbegor linked up once again, as Magbegor cut into the key for 2 points at the basket.

Shortly after, Magbegor continued to display her dominance inside the key as she converted at the board with an offensive rebound. Tiffany Mitchell fed off the energy her team was providing, executing an explosive drive to the basket, and swinging the momentum back Melbourne’s way.

Melbourne continued their shooting accuracy as they went on a 14-0-point run, including an explosive drive from Magbegor, shot from the perimeter by George and a corner three from Madgen.

Melbourne repeatedly displayed their aggressive entries into the key and their outside-inside movement, linking up with their talls and converting at the basket. As the second term came to a close, Madgen hit a buzzer beater from outside the arc. Melbourne maintained their lead, 61 – 25.

It was raining threes for George in the third term, hitting three from three and converting twice inside the key. Mitchell continued Melbourne’s shooting accuracy with two jump shots and a shot from the perimeter.

Canberra continued to struggle in offensive accuracy, Kelsey Griffin executed a strong entry into the key although Magbegor was quick to respond at the other end.

At the end of the term, Canberra brought the pressure in defensive transition, numerous turnovers, and fast-break conversions. Despite their efforts, they were unable to swing the momentum back their way as the third term came to a close. Melbourne led by 48 points, 87 – 39.

Canberra brought the heat in the final moments, increasing their defensive pressure in transition. Lily Scanlon rose above the pressure in offensive transition, getting past Canberra’s increased pressure on numerous occasions, controlling the ball and stopping a turnover to convert with an explosive entry into the key.

Melbourne development players, Jacqui Trotto and Bella Niven-Brown, made their WNBL debut’s, getting their first minutes on court with a warm welcome from the stands.

Melbourne played all four terms with determination, unison and energy – taking the win, 107 – 52.

Melbourne played with a fire in their bellies and showcased what we have to look forward to in the semi-final series. The first game of the semi-final’s series will be at the Boom Box against Adelaide Lightning, Thursday 24th March.

The Boomers will need all the support they can get in the stands so grab your tickets as Melbourne begin their finals campaign!