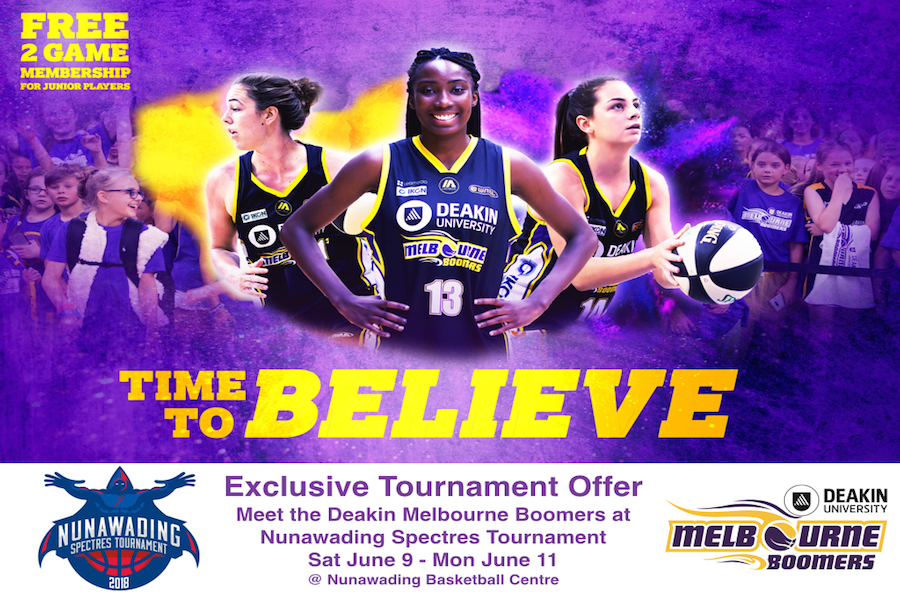 The Deakin Melbourne Boomers will this week partner with one of the world’s largest junior basketball tournaments – the Nunawading Spectres Queen’s Birthday Tournament.

More than 630 junior teams from across Australia and New Zealand will flock to the eastern suburbs of Melbourne for the popular tournament that is nearing its 50th year.

The Boomers will be located at Nunawading Basketball Centre across all three days of the tournament with young star Monique Conti making an appearance to meet young players.

Joining forces with Nunawading Basketball, the Boomers will be offering all junior players (17yrs & under) a free 2-game membership for the coming WNBL season.

“Nunawading Basketball’s annual tournament is one of the very best available across all junior sports in Australia and is one of the biggest basketball tournaments in the world, so everyone at the Boomers is excited to be a part of it,” said Boomers GM, Justin Nelson.

“We have an outstanding relationship with Nunawading Basketball, they are one of more than 40 clubs and associations  partnering the Boomers and as a part of that partnership we will be offering all junior players a free two game membership for the coming season.”

Nunawading’s Mark Hallett believes the importance of having Melbourne’s WNBL team partnering the tournament is another fantastic way of connecting the grassroots with the elite level of the game.

“Nunawading Basketball is a proud supporter of the player pathway from grassroots to the elite. We have enjoyed watching players like Boomers’ captain Jenna O’Hea progress from Nunawading’s junior program to becoming one of Australia’s very best players,” said Hallett.

“It’s exciting to know all the juniors this weekend will have the chance to meet a young star like Monique Conti and also get a free two game membership. It’s a positive move from the Boomers and another example of how they are working to bring all levels of the game together to support girls and women in basketball.”

The Deakin Melbourne Boomers stand will be located in the market hall at Nunawading Basketball Centre on Saturday, Sunday and Monday of this weekend’s tournament.

Full season memberships will also be on sale with juniors starting from just $49 for all 10 regular season home games. For full membership prices, click HERE.