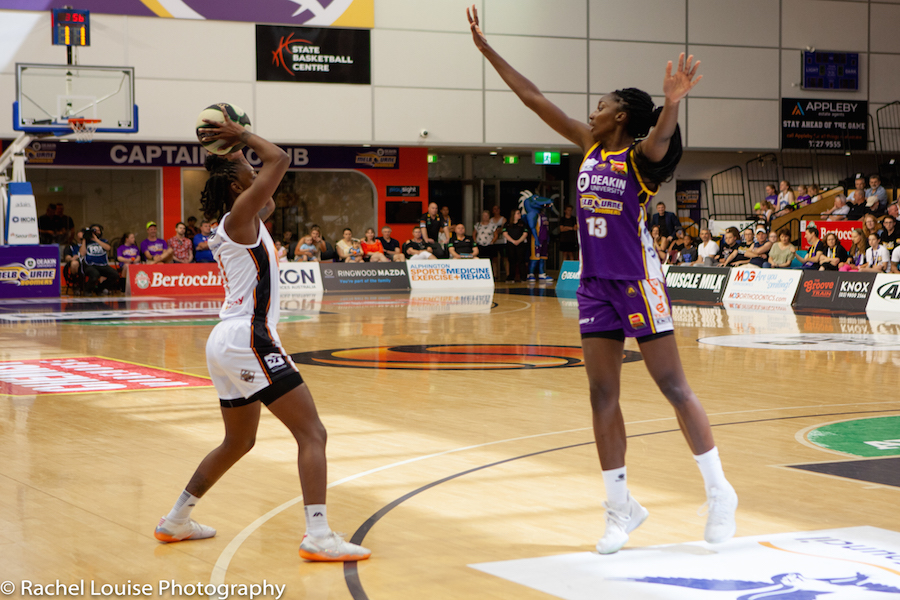 THE DEAKIN MELBOURNE BOOMERS have drilled their ninth win of the 2018/19 Chemist Warehouse WNBL season with a 6-point victory over the Townsville Fire, clinching the 73-67 result with another solid team performance.

A lively and energetic 1,694 fans enjoyed a day out at the State Basketball Centre for the annual Dads & Daughters game in what was the third and final meeting between the two teams this season.

The first quarter started slowly for both teams before skipper Jenna O’Hea put the first basket on the board. Maddie Garrick then hit the free throw line nailing both of her shots to edge the Boomers out to a 4-point lead.

It was then Garrick who was back at it again hitting a big triple that put the crowd into a cheering frenzy. Steph Talbot then joined in with a basket of her own, before Lindsay Allen got a steal and drilled a corner-trey. The triples kept coming curtesy of Garrick, who finished the quarter with 10 points of her own.

The Boomers capitalised on the momentum late in the first with Cayla George kicking things off early in the second. Baskets by O’Hea and Kalani Purcell saw the Boomers edge to a 7-point lead.

The triples didn’t stop for Garrick, before George joined in the action with one of her own. It was then an Ezi Magbegor hoop that saw the Boomers get out to a 12-point lead half way through the second period.

The Boomers ran with energy to get out to a 19-point lead before the Fire bridged the gap back to 12-points heading into the locker room.

Steph Talbot started things off hot in the third for the Boomers with her own consecutive baskets.

Despite a quick five points for the Boomers, things were rather slow as both teams struggled to convert on the board. It wasn’t until a late Monique Conti basket that placed the Boomers out comfortably to an 18-point lead. The Fire however weren’t stopping, drilling two baskets of their own in the final minute of the term to trail by 13-points going into the last.

In typical fashion, Talbot made the first move in the last quarter with a smooth 2-pointer before Cayla George contributed with four quick points of her own. Again, each team struggled to find a rhythm before a surge from the Fire saw them bridge the gap to 7-points with just over 1 minute left to play.

Allen however kept the Boomers steady as she scored two free throws before another Talbot basket maintained the Boomers lead. It was a late Allen hoop to bring it home for the Boomers final scores 73-67.

The Boomers have now moved to a 9-4 record and edged into second place on the WNBL ladder.

The Boomers next take on Sydney Uni Flames this Saturday (Dec 8) 3pm at home for the Girls Day Out game.

Tickets to Saturday’s game are on sale now – click HERE.