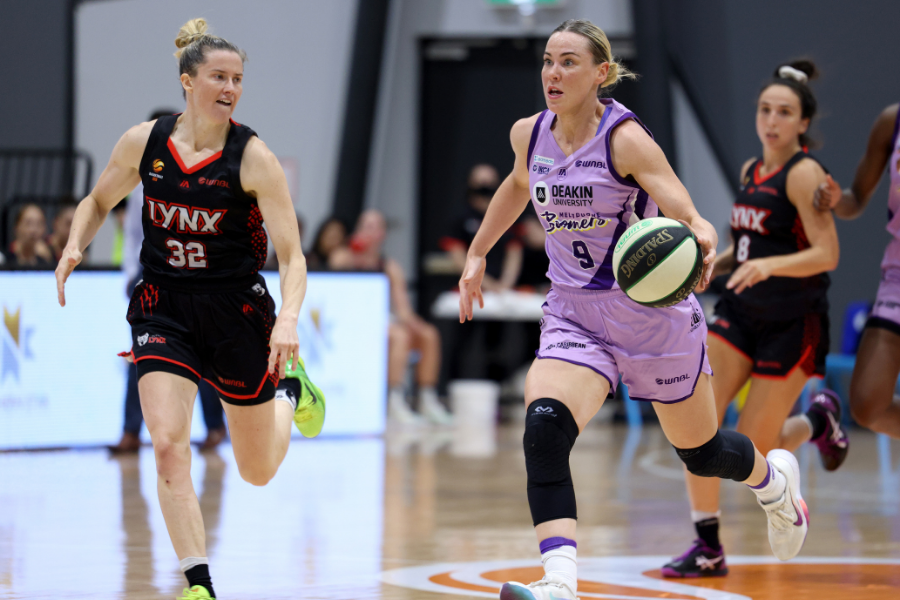 Boomers strike gold in Ballarat to take win over Perth

The Deakin Melbourne Boomers walked away with a win in Ballarat during their second match of the Reach Out round against Perth Lynx.

Lindsay Allen started Melbourne off with the first shot of the night.

Marina Mabrey came out firing for Perth, starting her team off with the first four points of the night. Perth pressed up the court which brought the pressure to Melbourne in the first term, causing the Boomers to play quickly and make difficult passes.

Cayla George lit it up from the arc as she hit back-to-back triples which were responded to by Perth’s Lauren Scherf. Both teams provided increased pace end-to-end with back-to-back buckets in the last few minutes of the first term.

Tiffany Mitchell made her presence known in the first quarter with a driving layup, a midrange two and hitting a triple in the dying moments. Perth led by seven at the break, 25 – 18.

Mitchell followed her end to the quarter with another shot from the arch at the start of the second term. Perth showed off their power at the arc hitting seven from 11 triples, led by Sami Whitcomb which gave the Lynx a double-digit lead.

Tess Madgen was everywhere in the second term and showed her confidence from long range, with her first bucket of the game from the arc, followed by two more, and multiple strong drives to the basket. Madgen ended the night with 13 points and three rebounds. Melbourne were down by two points at the half time break, 45 – 47.

The third quarter provided a game of defence from both teams, trying to limit each other’s scoring. Allen proved unstoppable on the fast break from a turnover, driving into the basket.

The third term had both teams trading for the lead as they went bucket for bucket. George continued to light it up from long range and Melbourne found themselves making the most at the foul line with 12 from 14 from the line.

Melbourne took their largest lead, three points, with a minute and a half left of the term. Perth was able to make a two-point shot in the dying seconds of the third term. This made it a one-point difference Melbourne’s way, going into the fourth quarter, 59 – 58.

Recently signed, Carley Ernst made her first bucket in the final term and ended the night with four points. George hit another two triples as Mitchell continued to show her power and aggressiveness moving into the key and at long range.

Melbourne capitalised on their foul line shots and ended the night with 18 from 20. Lynx were unable to respond to the Boomers relentless pressure and shot accuracy in the final term, only hitting a triple in the dying seconds. Final score, 80 – 77.

The Boomer’s captain, George, ended the night with a double-double, 19 points and 11 rebounds including five from the arc. Additionally, Mitchell walked away with 22 points whilst Magbegor had 14 points, eight rebounds and four assists.

Don’t miss us take on Townsville back at the Boom Box (MSC Parkville) this Saturday!

You can purchase tickets here. See you there.