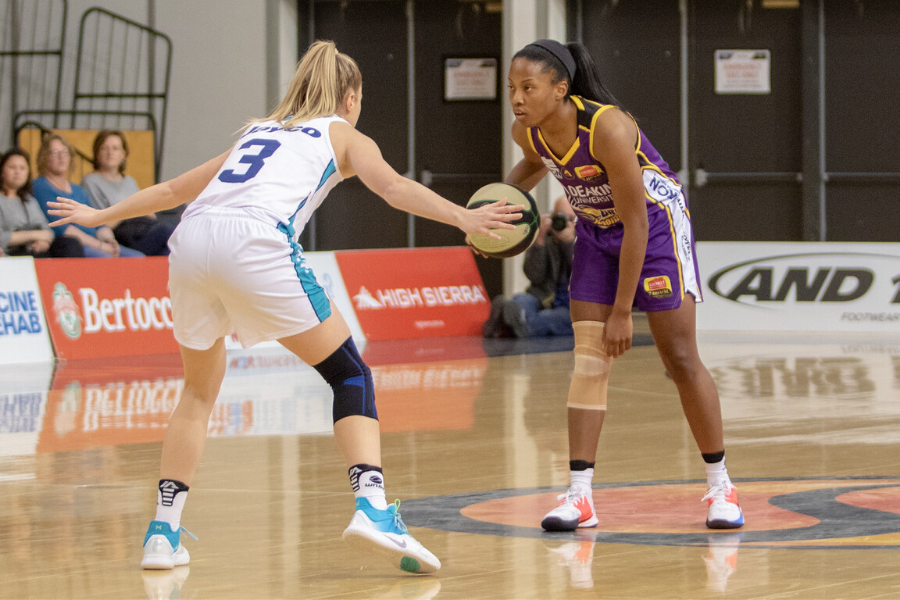 It’s the game that will ultimately determine which team will sit undefeated at the top of the WNBL ladder. The Deakin Melbourne Boomers taking on their newest local rivals, the Southside Flyers.

There is a lot of talent throughout the WNBL, with women from all over the globe coming to play in our national league, however taking to the court on Monday night will be some of the world’s absolute best. This means we’re expecting the toughest competition of the season to emerge at the State Basketball Centre on Monday night.

With five Australian Opals players taking the court over the two teams, the Boomers with Ezi Magbegor and Cayla George, and Flyers with Jenna O’Hea, Sara Blicavs and Leilani Mitchell, it’ll be a high quality competition between the teammates. Then to further intensify the atmosphere Opals captain and former Boomers captain O’Hea will be facing her previous teammates.

George speaks highly of the friendships she has with her teammates turned opponents but will be ready for the competition come Monday.

“One of the amazing things about playing this game is the friendships and sisterhoods you make along the way!”

“Playing alongside the girls rocking the green and gold is super special but we’re all super competitive too. So expect a really fierce battle come game time! Of course with high fives, chest bumps and hugs post game.” she said.

Magbegor also claims that she is eager to compete against her Opals teammates,

“It’s always great playing another Melbourne team and we have a new rivalry with Southside. We’re both 4-0 to start the season so this game will decide top spot.” she said.

“It’s great when I get to compete against [Opals] teammates such as Leilani [Mitchell] and Jenna [O’Hea], so I’m looking forward to a great game on Monday.”

In round three, Boomers point guard Lindsay Allen was unstoppable against the UC Capitals and Townsville Fire, but this week she is going to match up against one of her greatest challenges in Mitchell. Both Allen and Mitchell are considered to be some of the best point guards in the WNBA and WNBL.

Both are exceptional with ball in hand, Mitchell with 31 assists for the season to date, Allen with 24, while also being deadly from beyond the arc, shooting at 48% and 53% respectively.

When asked about this week’s game, Allen is excited for the derby, and is looking forward to the on court battle with Mitchell.

“We’re excited to play our local rival Southside in the annual cup eve game. It should be a well-played game across the board and a fun atmosphere for fans.”

“I always enjoy playing against Leilani [Mitchell], she’s one of the best point guards in the world – certainly in Australia. It should be a fun match up.” Allen said.

The Boomers and Southside will meet at the State Basketball Centre on Monday at 7:30pm, buy your tickets here!