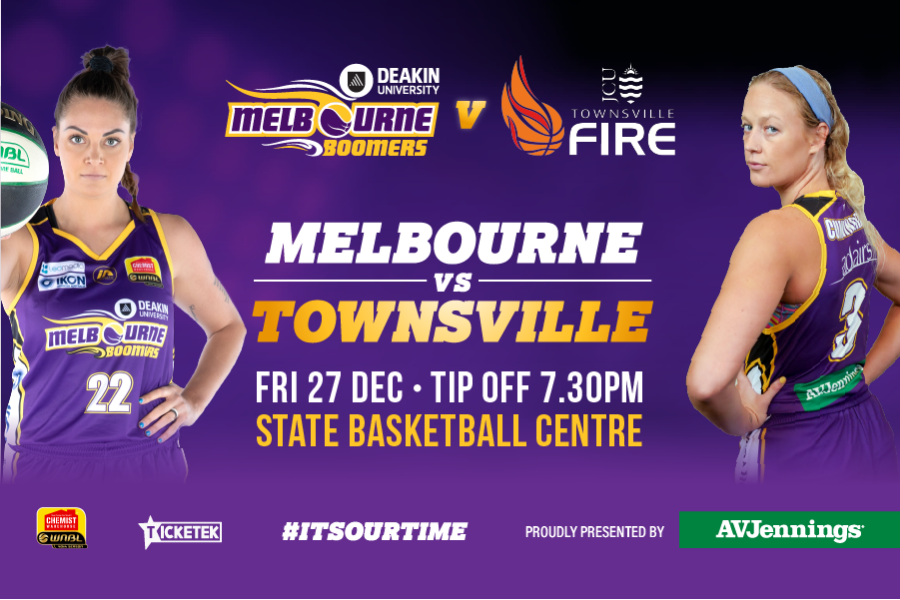 Fans at the December 27 Deakin Melbourne Boomers vs Townsville Fire match will get a sneak-peek at the future of live events when they are treated to a free sample of ground-breaking Australian in-game technology – Aircast.

Aircast will allow fans at the State Basketball Centre to listen & watch Deakin Live’s broadcast in REAL TIME on their device.

Developed by Australian tech company Convergence Technology Group, Aircast reduces stream latency to around 0.3 of a second, allowing fans to enjoy the live action and the live coverage at the same time.

“Fans will be able listen to commentary on their phone and will be able to choose their own camera angles,” said Convergence Technology Group Director, Craig Horobin.

“There’s nothing like being there live at an event, with the roar of the crowd. But there’s also no substitute for live coverage with its commentary & access from every angle.

“However due to stream latency (or lag), live coverage hasn’t effectively been live. It’s generally been 45 seconds to a minute behind, so what you see and hear on your device doesn’t match up with what you’re seeing and hearing live at the venue. So until now, fans have had to choose between one or the other. Live at the venue or live coverage. But not any more.

“Aircast delivers the excitement and atmosphere of live sport and all the added benefits of live coverage without having to be in a big-stadium corporate box. And even those TVs tend to be a few seconds behind!”

After a comprehensive R&D and testing program over the last four years, Convergence Technology Group is ready to share this ground-breaking technology with sports fans for the first time.

“We were looking for an organisation to partner with and the Boomers are the perfect fit. They’ve been at the forefront of bringing live-streaming into the WNBL and they are always searching for new ways to develop their in-game fan experience. Aircast ties both those things together,” said Horobin.

“One of our club’s core values is innovation. So when Convergence came to us with the opportunity to be involved in this world-first experience, we immediately jumped at it.

“We broke new ground in Australian professional sport when we created a broadcast partnership with Deakin University last summer. There’s been nothing quite like it before and the production quality of our ‘Deakin Live’ broadcasts are as good as any live-streamed sport in this country.

“We created ‘Deakin Live’ primarily to service our fans who couldn’t get to our games. But we’ve always wanted to find a way to also share our broadcasts with our fans at the game as well. It’s going to be fantastic to be able to experience the live action while listening to the commentary on your phone in real time without that annoying lag which otherwise makes it impossible. Then you can look down and check a replay of a big play, a key moment or a 50-50 call during a time-out.

“And for this global puzzle to finally be unlocked by a little Australian tech company based right here in Melbourne is fantastic. We just had to be involved.”

Horobin and his team are currently in discussions with sporting organisations around the globe.

“It’s the future of live events and it’s going to start right here in Melbourne.”

Aircast will be available to fans in the Southern Stand at the State Basketball Centre, so they are encouraged to bring their headphones to the Boomers-Fire match on December 27 and plug in to their device to enjoy the best of both worlds – live action AND live broadcast – for the very first time.