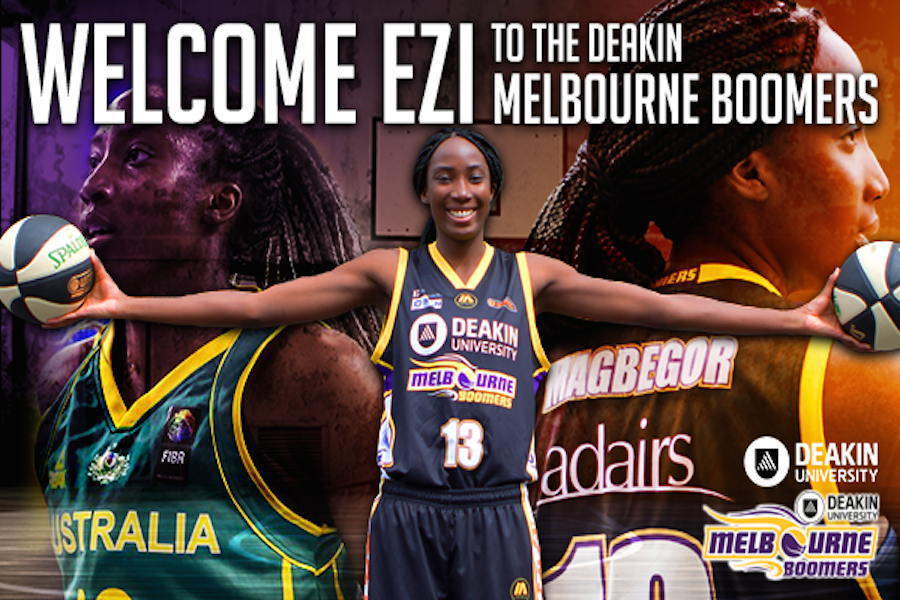 One of the best 18 year old basketballers in the world and Australian basketball’s most promising young player Eziyoda (Ezi) Magbegor is officially staying home in Melbourne – signing with the Deakin Melbourne Boomers for three years.

With a name meaning “determination” in Isoku, her parent’s native Nigerian language, Ezi’s resolve didn’t waver at the promise of US college offers.

Her decision to stay in Melbourne was clear – be close to her family, develop her professional career representing her home town in the WNBL and Australia on the international stage.

Another ‘hard to resist’ opportunity was being mentored by the great Lauren Jackson; having always dreamed of following in the footsteps of idol Lauren Jackson who is also Deakin Melbourne Boomers’ Assistant General Manager and was named this month on the “ESPN Magazine Dominant 20” list of athletes in world sport over the past 20 years.

“Lauren is an inspiration both on and off the court. She’s the best basketballer Australia has seen and most probably the world. She has achieved everything I’d like to one day. It’s an absolute honour to play for a Club she is a major part of,” said Ezi. Ezi solidified her position as the best junior player at the World Championships in Spain, being awarded Tournament MVP for her performance in 2016, and backed it up earning herself WNBL’s Rookie of the Year in 17/18.

“Averaging 12 points, eight rebounds, two blocks and a steal per game, she played a major part in knocking the USA out of the semi-finals. She’s one of the world’s genuine rising stars,” Lauren said.

Ezi’s agreement at the Deakin Melbourne Boomers will take her through from the playing with Opals at Commonwealth Games next month, to the World Championships in September, the Tokyo Olympic Games and the next three WNBL Seasons.

Tony Hallam, Melbourne Boomers Chair, said, “As a club, we’re determined to give the best young basketballers opportunities to grow and play in Melbourne. Ezi is an exceptional young woman that has the makings of a star and the commitment to being a great role model in our community.

“Ezi joins a star filled line up and team favourites, we couldn’t be happier for our Melbourne Boomers family of supporters. Our aim is to continue to build on the successes of the last two years, with our eyes on the grand prize this year.” A few facts about Ezi

As ‘Melbourne’s team’, the Deakin Melbourne Boomers is the oldest WNBL team, home to more Olympians and Opals than any other, and the longest running elite-level women’s sports team in Australia.

The club soared to make the Women’s National Basketball League (WNBL) grand final in the 2017/18 season as runner up, and is looking for one better this time around.