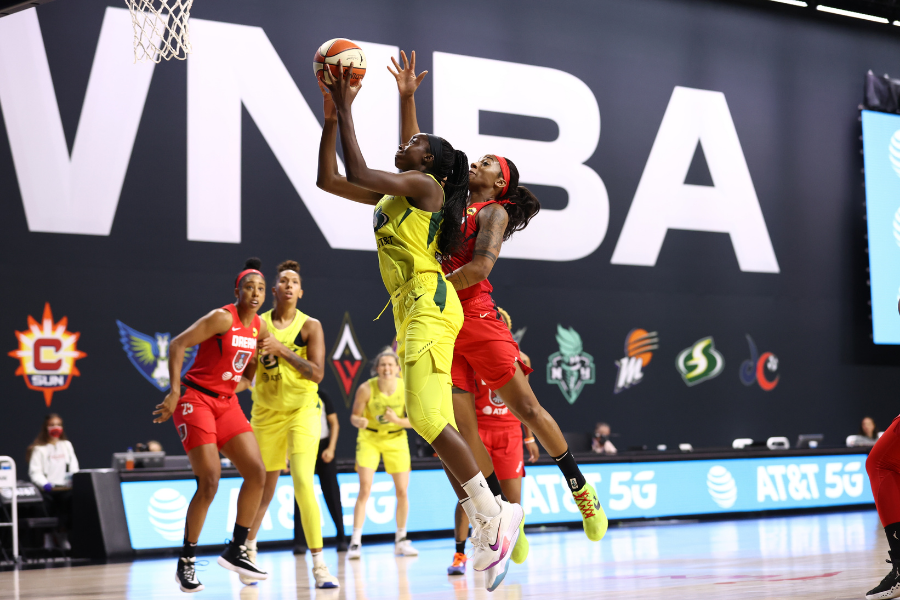 Ezi returns home with championship in her debut WNBA season

After a last-minute decision to go ahead with her debut WNBA season – in the midst of the COVID-19 pandemic – Ezi Magbegor has impressed in her short time with Seattle Storm and secured a championship to boot.

This most recent WNBA season consisted of a 22-game fast-tracked regular season played in a ‘bubble’ at IMG Academy in Bradenton, Florida.

Seattle Storm last took home the championship in 2018 but struggled last season due to their two superstars, Sue Bird and Breanna Stewart, battling injury. With Bird and Stewart back, plus the addition of Magbegor, there was a buzz of excitement around the Club with the real prospect of achieving the same amazing 2018 finish.

Storm swept the Las Vegas Aces 3-0 in the best of five Finals series, winning game three 92 – 59, to nab their second title in three years and equal Minnesota and Houston with as the only franchises to have won four championships.

Magbegor impressed early and made a steady contribution throughout the regular season. In 22 games she averaged 13.3 minutes on court, 6.5 points, a 56.9 field goal percentage, 2.5 rebounds, and 0.5 blocks.

Taking up position with the Storm after being selected by them as the No.12 pick in the 2019 WNBA draft, Magbegor clearly fits into their short and long-term roster strategy.

Deakin Melbourne Boomers GM, Christy Collier-Hill adds, “It was so exciting to see Ezi getting good minutes and making contributions all over the court right from the start.”

“As a club we have been filled with pride to be watching and following her journey along the way. It only kept getting better and we could not have wished for a better result for Ezi in her debut season with the Storm.”

The Deakin University student will travel home to Melbourne as soon as possible to see family and be reunited with the Boomers team in the lead up to the upcoming WNBL season.

“I’m excited to be going into my third year with the Boomers. With a lot of returning players, we’ve built a strong team and I am looking forward to getting on the court with the team and really working this season,” Ezi said recently.

Following an amazing performance in her Championship winning WNBA debut season (not something a lot of people can claim!), we’ll then have front row seats to witness Magbegor firing to get back on the court for the Boomers this year in the WNBL.

Can she take out the double this year? Let’s hope so.