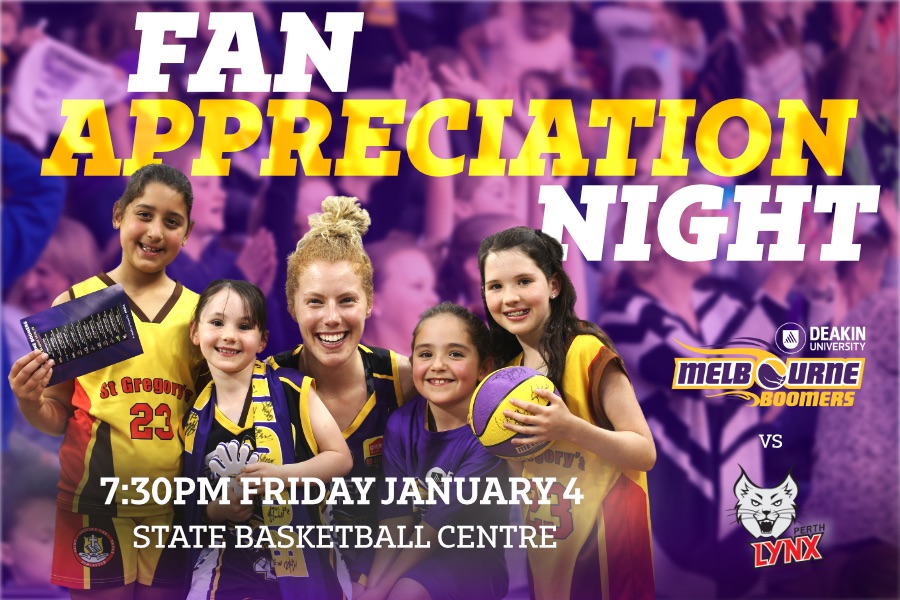 Fan Appreciation Night A Big Focus For Boomers This Friday

When it comes to fan appreciation the Deakin Melbourne Boomers place it as a top priority. Just five years ago the Boomers were lucky to attract a few hundred people to a game, but these days it’s not often you see the State Basketball Centre with any less than a couple of thousand Boomers faithful at home games.

This Friday night the Boomers will hold its FAN APPRECIATION game against the Perth Lynx, with lots of fun in store for the fans. Though the City of Melbourne is set to deliver a hot day, the coolers at SBC will be on to ensure a comfortable night of hoops.

“It’s all about the fans,” said Boomers GM Justin Nelson, adding, “We love nothing better than seeing smiling faces at Boomers games, we work hard to entertain everyone and of course the after-game on court when the fans meet the players is such a great time for everyone involved.”

As it is with all Boomers home games, the fans can expect lots of giveaways and interaction, including Dexter’s Conga Line and the inaugural U14 Skills Challenge Grand Final.

This Friday’s game also doubles as Nelson’s last regular season home game with a move to New Zealand to run the NZ National Basketball League just around the corner, though as he points out, “first we have finals to contend with.”

“I’m not going anywhere just yet, we have a big month ahead of us and everyone in the organisation has their minds firmly focused on the job at hand.

“The Boomers staff and volunteers have been fairly active on social media this week building up Friday night’s game for me before I head to my new job after the finals series, which is much appreciated.

“I would love nothing more than to see lots of Boomers fans at the game and for the team to get another big win. It’s all about the fans, and of course we all love seeing the team play well and winning games,” Nelson added.

Tickets to this Friday night’s game are now on sale HERE or you can purchase general admission tickets at the door from 5:30pm.