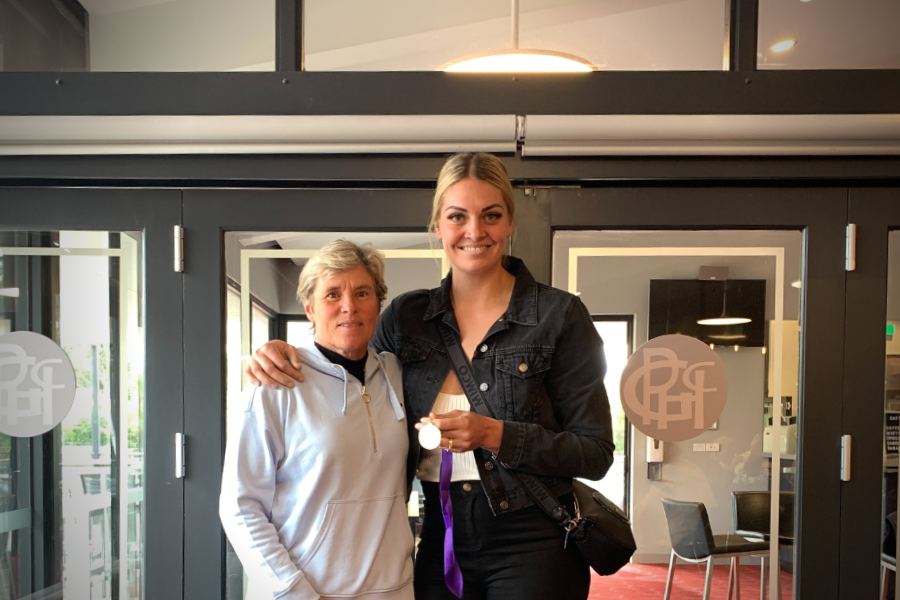 Boomers Co-Captain and Australian Opal, Cayla George, has taken home the Michele Timms Medal for the Most Valuable Player, as well as Member’s Player of the Year, for second season running.

The Boomers’ end of season Awards were presented today at a small BBQ gathering for the inner-sanctum of the club. A chance to celebrate and look back on the 2020 hub season.

George was listed in the All WNBL First Team after another outstanding season and is looking ahead to the Tokyo Olympics with the Australian Opals.

Honoured as Players’ Player was Australian Opal, and Seattle Storm (WNBA) second year player, Ezi Magbegor. Her teammates voted Magbegor as the player who best demonstrated and upheld the values of the Boomers, was supportive and encouraging, whilst always being a true team player and giving her best.

Magbegor was listed in the All WNBL Second Team in 2020, alongside Boomers teammate Tess Madgen, and finished runner-up by one vote in the WNBL’s Betty Watson Australian Youth Player of the Year Award. She also took fourth place in the WNBL’s Suzy Batkovic Most Valuable Player Award.

The New Zealand Tall Fern’s first season with the Boomers, Karaitiana had a stellar season, and wasted no time slotting into the team culture.

As mother to 20-month old daughter, Kalea, the Boomers fully supported Karaitiana’s return to the WNBL – Kalea travelling with the team in the hub.

Izzy Wright took out the Most Improved Player of the Year honours, after her return to WNBL with the Boomers.

Despite being a WNBL veteran, having played for both Logan Thunder and Perth Lynx in the past, Wright impressed in her return to the league, getting better on court with each outing.

Volunteer of the Year was awarded to Molly Roche, who assisted with game day marketing and communications for the Hub season. Roche has volunteered with the Boomers for a number of years now in various roles, and it’s great to see her rewarded for her efforts.

There’s no doubt WNBL20 tested everyone’s commitment and resilience, making our award recipients achievements even more special. Congratulations to all, and we look forward to getting back out on court in WNBL 21-22 later this year.