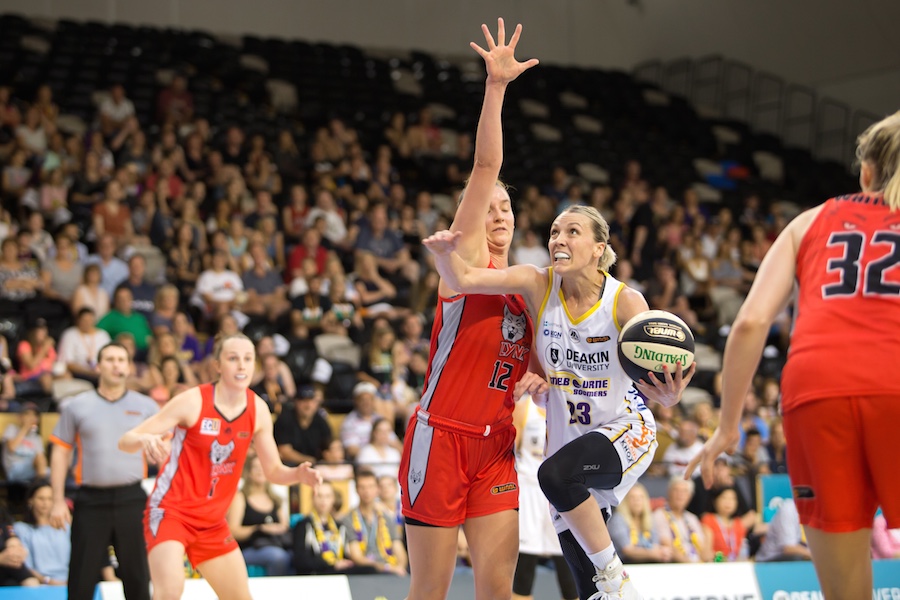 The Perth Lynx have held on to claim a victory over the Deakin Melbourne Boomers in the final seconds of a thrilling 92-89 top-of-the-table clash played in front of a vocal crowd of 2,372.

Much like the last time these two teams met, the match came down to the final seconds, with the Boomers just falling short of taking their second win of the season against the Lynx.

Liz Cambage once again proved why she’s a force to be reckoned with, finishing with 38pts, 15rbs, and 2ast in another stellar performance.

Perth jumped out of the blocks and took an early lead in the first quarter, capitalising on Melbourne’s nerves that saw several key shots fall wayward of the net.

Maddie Garrick was the first to get things firing for the Boomers with a quick 3 points from the corner to get the momentum going, but early honours went to  the hot-shooting Lynx as they held a 32-23 advantage.

Bec Cole hit four points within the first few minutes of the second quarter to close the gap to just ten points. Working with pocket rocket Monique Conti, the Boomers slowly but surely chipped away at the Perth lead, to end the half just behind at 46-51.

Melbourne made a run at the win in the third term, making six baskets in a little more than three minutes to finish the quarter only one point behind Perth and restrict the visitors to just 15pts in a see-sawing quarter.

A Monique Conti triple and a Liz Cambage clutch free throw late in the final quarter got the crowd up and about, right as a Maddie Garrick lay-up tied the scores.

However, the Boomers couldn’t quite push themselves into the lead. A clutch Kayla Standish 3 pointer and a wayward free throw from the Boomers all but sealed the deal, with Perth taking the win 92-89.

“Unfortunately, the last minute didn’t pan out the way, well last couple plays didn’t pan out how we wanted. [There was] lots of really good things that we did and the two things that we prepared well for and didn’t deliver on [were] too many unforced turnovers and we just didn’t box out well enough.”

The Deakin Melbourne Boomers will be looking to take away some tough lessons from their loss today against the Perth Lynx in preparation for next weekend where they face both Adelaide and the Perth on a tough road trip.

Melbourne’s WNBL team will be back at home on Saturday December 30 at 5:30pm when they host Dandenong in another local derby. Tickets are on sale now at www.trybooking.com/BOOMERS

TICKETS: at the door or online at www.trybooking.com/BOOMERS